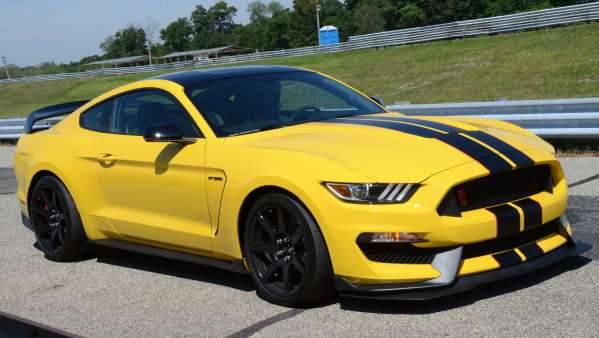 Since the Shelby GT350 and GT350R packages for the newest generation Ford Mustang were introduced, the internet has been chock full of discussions on how much they would actually differ in terms of performance and today, we have the best look yet courtesy of the folks at Motor Trend – who found a slight difference in wheel horsepower, but a far more significant different in all-out acceleration.
Advertisement

The 2015 and 2016 Shelby Mustang is being offered in two forms – GT350 and GT350R. The GT350R is simply a more extreme and more track-focused package, adding some lightweight items like the carbon fiber wheels and getting rid of items unneeded for going fast, like the rear seat, the audio system and the air condition. Also, the GT350R comes standard with the components of the “base” Shelby GT350 Track Package, but in terms of the actual drivetrain and most of the other key components – the two new Shelby Mustangs are pretty much similar.

One key component that differs slightly is the exhaust system, as the GT350R doesn’t have the same midpipe resonator as the GT350. As a result, some Mustang fans insisted that there would be better exhaust flow and more power from the flat plane V8 in the GT350R – but the folks at Motor Trend have debunked that myth in fine fashion.

The Shelby GT350 and GT350R on the Dyno
The 2015/2016 Ford Mustang in Shelby form comes with a new flat plane 5.2L V8 that is expected to deliver 526 horsepower at the back of the engine, and that is true whether you opt for the GT350 or the GT350R – or so Ford insists. Some people believe that the GT350R actually makes more power, so Motor Trend put the two on the dyno and – not surprisingly – the results were almost identical.

The Shelby GT350 laid down a best of 467 rear wheel horsepower while the more track-focused GT350R posted a best figure of 471 rear wheel horsepower. That’s right, there was a difference of just 4 wheel horsepower between the two new Shelby Mustang coupes. That difference is most likely due to the fact that the GT350R was wearing the ultra-lightweight carbon fiber wheels, and spinning a lighter wheel takes less engine effort and in turn, it allows the GT350R to put a few more ponies to the wheels.

That isn’t a very significant difference between the GT350 and GT350R, but in the real world, the performance difference was far more substantial.

GT350 VS GT350 on the Quarter Mile
The Ford Mustang Shelby GT350R only sent 4 more horsepower to the ground on the dyno, but the fact that it is much lighter than the GT350 – and that it is far stickier tires on lightweight wheels – allows the “R” to be quite a bit quicker in terms of acceleration.