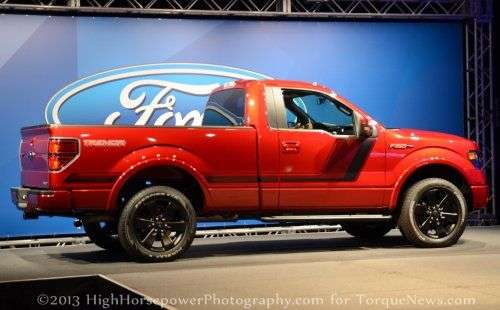 Today at a private event in Dearborn Michigan, the new Ford F150 Tremor was unveiled to the media - introducing the newest generation of Ford on-road sport trucks but unlike the old F150 Lightning that used a supercharged V8, the new F150 Tremor calls upon EcoBoost power.
Advertisement

Ford Motor Company hasn’t offered an on-road sport performance truck since the demise of the SVT Lightning back in 2004 but with the introduction of the 2014 F150 Tremor – FoMoCo is back in the sport truck market. This new trimline is available only with a regular cab/short bed configuration and while the buyer can select either rear wheel drive or four wheel drive, there are few other options for the new F150 Tremor. However, there are very few options available for this new sport truck because there isnt much that the Motor Company hasn’t already fitted into this new trimline.

“The new Tremor gives F-150 customers yet another option to drive a highly capable, distinctive performance truck with features typically found only in the aftermarket,” said Brian Bell, F-150 product marketing manager. “Plus, the Built Ford Tough EcoBoost engine is available for the first time in a short-wheelbase F-150.” The standard engine for the 2014 Ford F150 Tremor is the powerful twin turbocharged EcoBoost V6. This mill sends 365 horsepower and 420lb-ft of torque to the wheels via a 6-speed automatic transmission. An electronic locking rear differential is standard in both rear wheel drive and four wheel drive versions to help get the best traction possible while a set of standard 4.10 gears – the highest available on any factor-built F150 – helps to improve the acceleration capabilities of this sharp looking pickup. Ford expects that the Tremor will go from a stop to 60 miles per hour in the mid 6 second range.

While the new Ford F150 Tremor doesn’t pack quite as much power as the 2004 SVT Lightning that offered 380 horsepower and 450lb-ft of torque from the supercharged 5.4L V8, the performance capabilities of the Tremor in stock form could be close to that of the Lightning thanks to the advancements in lightweight chassis design. We will have to wait for some real world results to see just how fast the F150 Tremor really is but on paper this appears to be a truck that will be a heck of a lot of fun to drive. Also, unlike the Lightning, the Tremor should offer great fuel economy figures without compromising power so Tremor drivers can expect pretty impressive fuel economy even with the 4.10 gears. Oh, the new F150 Tremor can also tow over 8,000 pounds which is mighty impressive for a regular cab sport truck. In addition to the specially designed EcoBoost drivetrain, the 2014 Ford F150 Tremor features a similar interior and exterior appearance package to the one used for the current F150 FX2 and FX4. This includes dark bezel projection headlights, black running boards, black 20 inch wheels, a black stripe running along the side of the truck, black accents on the hood, a black grille, dark fender badges and unique Tremor badging on the outside while the inside features black Alcantara bucket seats with red piping (which are not available on any other regular cab F150), a floor mounted shift console and red stitching on the leather wrapped steering wheel.

Ford hasn’t announced any pricing for the 2014 F150 Tremor but we can expect all of the details before this new sport truck hits dealerships later this year. LG's New EV Battery Plant Is a Welcome News for Tesla
Tesla Giga Berlin's New Hurdle: It's Not Only the Gov't, but Now Tesla Itself
END_OF_DOCUMENT_TOKEN_TO_BE_REPLACED