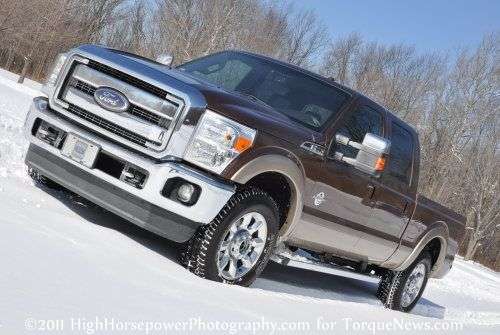 Ford was not hit as hard as GM and Chrysler when the auto industry imploded in 2008 and 2009, so Ford Motor Company saw an improvement of just 14% but with the Ford brand moving over 150,000 vehicles last month, Ford was the top selling brand in the US market.
Advertisement

While Ford moved more vehicles than any other brand in the US auto industry with 150,678 vehicles accounting for an improvement of 22% compared to February last year, that was the only bright spot for the Motor Company. Lincoln, as the only other brand in the company right now, saw a decline of 11% compared to February 2010 and for the first time in 864 months (that’s 72 years), there was not a single Mercury model sold as Ford appears to have successfully “wound down” the middle child brand. The trouble at Lincoln dealerships and the lack of the Mercury brand brought Ford Motor Company a gain of just 14% over February 2010.

Ford was the strongest brand among the entire American automotive industry in terms of growth, with 150,678 cars, trucks, vans and SUVs sold, giving them an improvement of 22% over the second month of 2010. With 37,549 units sold, the Ford F-Series truck family was once again the top selling vehicle in the country, with a 14% gain over last year keeping the F-Series atop the list of America’s bestselling models. The Ford Fusion moved 23,111 units last month, making the Fusion the bestselling car in the US market and allowing the award-winning sedan to report a whopping 40% gain over last year. The Ford Escape was third in total sales with 18,005 units sold – a 19% gain over last year. The strongest vehicle from the Ford brand in terms of growth was the all new Ford Explorer with 9,657 SUVs accounting for a gain of 139% over last year (even though last year’s numbers are for the old, truck based Explorer). The outgoing Ford Crown Victoria was next in terms of growth with a gain of 81% and the Transit Connect was third was a 61% gain over 2010.

While Ford looks at the demise of Mercury as something that will lead to good things down the road, it has seemingly had a great negative impact on the Lincoln brand, as Ford Motor Company’s luxury arm saw an 11% drop in sales in February 2011. The Lincoln MKZ (the sibling to the Ford Fusion) was the brand’s bestselling model with 1,775 units sold for an improvement of less than 1% compared to February 2010 but at least it showed a gain. The next best in terms of sales volume was the MKX crossover with 1,626 vehicles sold accounting for a brand-best 13%. Unfortunately, the MKS, Town Car, and MKT all saw declines in sales from last February to this one and the often-criticized Lincoln Navigator managed to put together an improvement of 14% - making the hefty SUV the best model for Lincoln in terms of growth. Ford has continuously promised more vehicles for the Lincoln brand and while there has been little news as to what they will be or when they will arrive, one thing is for sure – anything that gets potential buyers in Lincoln dealerships can’t come soon enough.

According to Ford Motor Company, the Mercury brand did not move a single unit in February 2011. Since being introduced early in 1939, the middle child brand from Ford Motor Company has been a mainstay in the company’s books but for the first time in 72 years, not a single new Mercury was sold last month. A moment of silence for Mercury, as it appears that the brand is officially dead and gone.