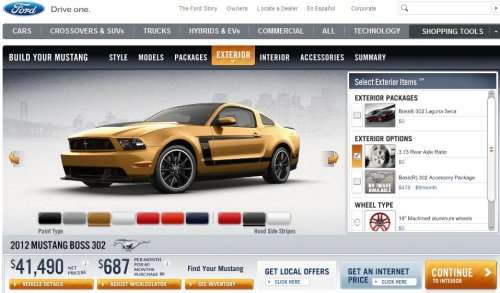 The 2012 Ford Mustang configurator begins by asking you to pick coupe or convertible with the 2012 hard top starting at $22,145 and the topless pony car starts at $27,145 – the same prices as the 2011 Mustangs. When you select coupe, you will find an impressive spread of six options ranging from the Mustang V6, the 2012 Mustang GT, the new Boss 302 and the Shelby GT500 with Premium trimlines offered for the V6 and GT models.

Should you select the 2012 Ford Mustang convertible, there is one less option as the Boss 302 is only offered as a coupe. The price changes for the 2012 Mustang convertible reflect those seen with the 2012 Mustang Coupe, as the base model V6 and GT500 carry the same price as the 2011 models, the Premium models cost $200 extra and the Mustang GT costs $500 less than the current models.

As you flip through the configurator for the 2012 Ford Mustang lineup, you will come across a handful of new features for the new model year, including a universal garage door opener in the Premium and GT500 models, improved sun visors with illuminated vanity mirrors and a “multi-purpose storage system”, a new V6 performance package and some color option changes inside and out.

Perhaps the most interesting aspect of the 2012 Ford Mustang configurator is the ability to design your own 2012 Boss 302 Mustang. When you select the Boss 302 option from the lineup of 2012 Mustang coupes, you are then prompted to select Rapid Spec 500A (the standard Boss 302) or Rapid Spec 501A, which adds the Laguna Seca package. As you flip through the paint options for the 2012 Boss, you may notice that when you select Black or Ingot Silver Metallic, the configurator automatically selects the Laguna Seca Edition but for the standard Boss 302, you can select from five different colors with either white or black Boss striping.

Once you head into the interior section of the 2012 Mustang Boss 302 configurator, there are no options for the Laguna Seca models with the standard Boss 302 offering options like the Recaro race seats. There are also no accessory options for the purpose built Boss 302 and when you check every option for the Boss (including the Laguna Seca package), it tops out at $48,465.

As mentioned above, there are only a limited number of new Boss Mustangs being offered with an allocation process that will focus the bulk of these high performance Mustangs in the largest markets in the country so for some people, this online “build your own” is as close as you will get to owning a new Boss 302. Also, with so few Boss 302s available, we can expect prices to dwarf those seen online.