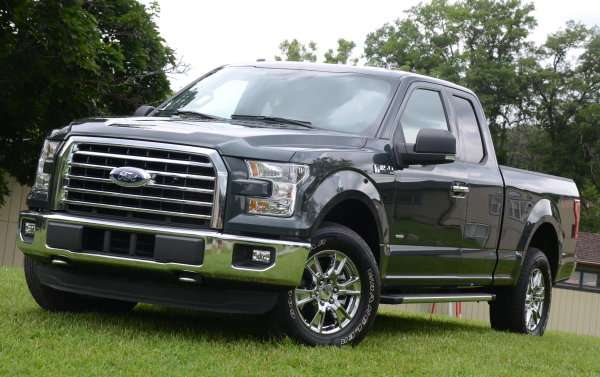 Ford F150 with a Range Rover Diesel Could Best Ram in Power, MPGs

It has been common knowledge for some time now that the Ford F150 will soon have a diesel engine option and while the Motor Company has offered up any official information, spy shots show what appears to be a Range Rover diesel under the hood of an F150 test truck – seemingly confirming the rumors that the F150 would pack Range Rover power.
Advertisement

The Ford F150 with the 2.7L EcoBoost engine is the most fuel efficient gasoline-powered truck in the full sized segment, but the Ram 1500 EcoDiesel is the most efficient truck overall, edging out the twin turbo Ford gas engine. Ford doesn’t like playing second fiddle, so it has long been expected that the F150 would eventually get a comparable turbo diesel engine to knock off the Ram EcoDiesel.

Over the past year or so, there have been multiple videos captured showing what many believe to be a new Ford F150 diesel test truck, but with the newest set of spy shots, there is no question. The crew at Autoblog got shots of one of these test trucks with the hood open, revealing what they believe to be a Range Rover turbo diesel engine.

Provided that they are right, this could be just the engine Ford needs to help the F150 take the overall half ton MPG title from Ram.

Range Rover Diesel
The Ranger Rover diesel in question is the 3.0L turbocharged diesel in the Range Rover Sport. In that big SUV, this small diesel engine produces 254 horsepower and 443lb-ft of torque. The Ram 1500 EcoDiesel produces 240 horsepower and 420lb-ft of torque, so if Ford took the engine straight from the Range Rover and dropped it in the F150 without making any changes – the half ton diesel Ford will likely overpower the half ton diesel Ram, but would it get better fuel economy?

The official EPA ratings for the 2016 Range Rover Sport TDV6 are 22mpg around town, 29mpg on the highway and 25mpg combined, and that includes standard four wheel drive, leading to a curb weight in excess of 5,600lbs. The Range Rover has better aerodynamics than the F150, but it also weighs considerably more. Depending on the body style chosen, the 2WD F150 has a curb weight under 5,000lbs, so if they couple the fuel-sipping engine with their new 10-speed automatic transmission and a lightweight body/cab configuration, it could most certainly yield better numbers than the Range Rover.

The class-leading Ram 1500 HFE EcoDiesel has EPA ratings of 21mpg city, 29mpg highway and 24mpg combined, which are a touch below the Range Rover, but that Range Rover diesel in an F150 could exceed 30mpg on the highway – making the Ford the most fuel efficient half ton truck sold in America.

Steve wrote on September 17, 2016 - 2:07pm Permalink
And to be clear the 3.0 Range Rover engine is part of a co-development effort between Ford and Range Rover. Ford isn't putting a "Ranger Rover" engine in the F150, and though IMO the 3.0L TD would be perfect, it seems the 4.4 TD that is part of the same effort is also an option, possibly intended for the Expedition or Navigator - which would definitely turn the full size SUV market on it's ear.