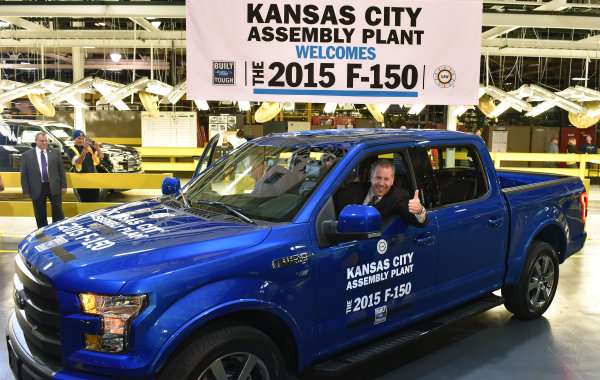 The local union responsible for building the 2015 Ford F150 at the Kansas City production facility was threatening to go on strike if some concerns with issues at the plant were not addressed, but the head of the local union has announced that a tentative agreement has been reached – thus avoiding a stoppage of F150 production at this vital time.
Advertisement

Before I get into the details of the possible Ford F150 production stoppage at the Kansas City Assembly Plant, I want to point out that this union action is separate from the current labor talks between Ford Motor Company and the UAW. This possible strike came about due to unresolved issues at the local level, specifically at the KC F150 plant, and while a tentative agreement has been reached to resolve this issue – this has nothing to do with the current labor talks between FoMoCo and the UAW.

Possible F150 Plant Strike
UAW Local 249 is the local labor union responsible for producing the 2015 Ford F150 at the company’s Kansas City, Missouri facility. Last week, Local 249 issued a 120 hour notice to Ford Motor Company that they would go on strike if some concerns at the local level were not addressed. Unfortunately, neither the union nor Ford Motor Company went into any detail as to what the issues were, but they were severe enough that the union had authorized a strike at the KC F150 plant.

Fortunately, the UAW and Ford Motor Company announced this morning that a tentative agreement had been reached and as a result, the workers at the Kansas City plant would keep on truckin’ – with new F150 pickups continuing to roll off of the line at a steady pace.

Major Crisis Averted
While we strangely don’t know what problems were so severe that it was worth going on strike, a labor stoppage at the Kansas City plant could have proven to be a major hit to Ford Motor Company right now. The company has worked to get F150 inventory levels to the point where dealers were able to meet the customer demand, and over the past two months, sales levels have finally reached similar numbers to what we were seeing prior to the 2015 models hitting the market. The word of packed inventory levels has sent more prospective consumers to dealerships to buy their new truck and had that flow of inventory suddenly screeched to a halt – it would have most certainly made an impact on the monthly sales sheets.

National Talks Continue
While the Local 249 in Kansas City and Ford Motor Company has resolved their small-scale issues, the company continues to talk with leaders of the UAW to come to an agreement on a new national contract. Over the past few weeks, there have been bright spots in the negotiations, but right now, all three American automakers continue to be without a new contract with the UAW.

As the national labor talks continue, you can be sure to find your breaking news right here on TorqueNews.com.