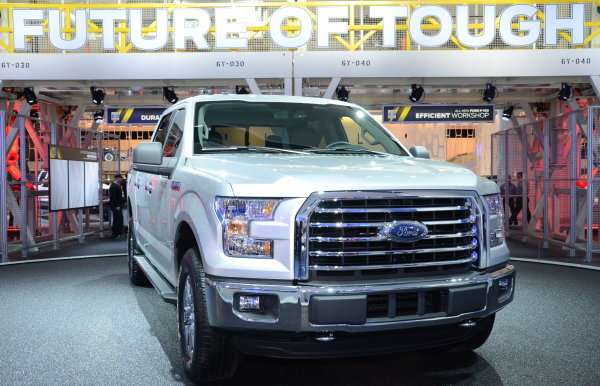 The sales figures for calendar year 2014 are in from pretty much every high volume automaker doing business in the US and for the 33rd straight year, Ford’s F Series pickup family is the bestselling vehicle in the US market, with 24 other vehicles moving more than 175,000 units in 2014 making up the top 25 vehicles in terms of 2014 US sales.
Advertisement

First up, for the 33rd straight year, the Ford F Series pickup family was the bestselling vehicle in the United States with a whopping 743,851 new trucks sold throughout 2014. If you subtract the 52 Sundays in 2014, there were 313 possible selling days in 2014 (not counting various holidays and such). If you divide the number of F Series pickups sold in 2014 by the number of selling days, Ford Motor Company dealerships sold 2,377 new trucks every day. Break that number down into a 12 hour day and Ford sold roughly 198 trucks every hour this year. By the way, 198 trucks an hour breaks down to about 3 trucks per minute so while you have read this piece, Ford has sold several more new F Series pickups.

Ford truck sales were down this year as people waited for the new models and with gas prices being lower now than they were last year, the Motor Company should almost certainly sell more than three quarters of a million F Series pickups during 2015. It should be noted that even if you added up the Chevrolet Silverado and the GMC Sierra pickups sold in 2014, with 741,588 trucks sold, GM still sold less trucks than Ford sold F Series models.

The Top Five
After the Ford F Series pickup, the Chevrolet Silverado lineup was second with 529,755 and the Ram truck lineup was third with 439,789. Remember when the analysts said that big trucks are on the way out? Yeah. Good call, fellas. The top three bestselling vehicles in America are full sized pickups and when you add up these three trucks, they sold more units than the top 4 cars combined.

Coming in fourth overall is the bestselling car in the US which is, once again, the Toyota Camry. Toyota moved 428,606 examples of the Camry last month, falling from third overall with the growth in Ram truck success, but still beating the 5th place (second among cars) Honda Accord with 388,374 units sold. The Accord also fell one spot as the Ram truck jumped from 5th in 2013 to 3rd in 2014.

Eleventh through Twenty-Fifth
The 11th through 25th bestselling vehicles in the US are largely the same as they were last year, except with improved numbers across the board. The full list of the top 25 is available below, but I wanted to point out a few key players in this group. First, the Hyundai Elantra was the bestselling Korean car in 2014, ranking 15th overall and 8th among cars with 222,023 sold last year and sitting in 19th overall, the Toyota Prius was the bestselling hybrid in the US and the 11th bestselling car. Finally, the new Jeep Cherokee – which was criticized so much for its unique front end design, was the 25th bestselling vehicle in America in its first year of existence.

In total, Ford and GM each have 5 of the top 25, Toyota has 4, Chrysler, Nissan and Honda each have 3 and Hyundai has 2.