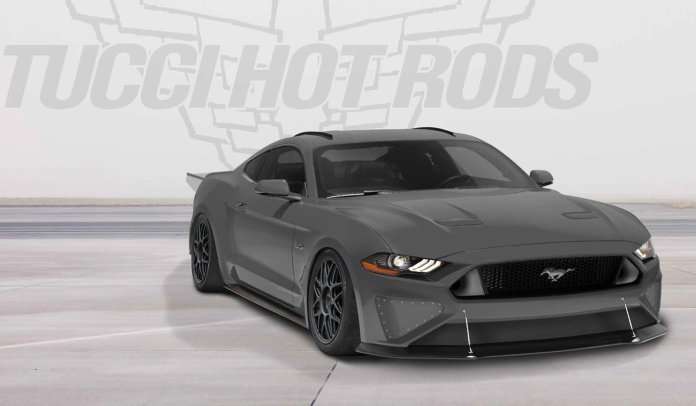 Ford is Bringing This 200mph Mustang GT to SEMA

Ford Motor Company has begun teasing the unique vehicles that will line their huge display at the upcoming 2017 SEMA Show in Las Vegas and among the seven Mustangs on hand will be a new 5.0L-powered pony car that will be modified to eclipse the 200 mile per hour barrier.
Advertisement

Ford will show off seven customized Mustangs at the 2017 SEMA Show in Las Vegas when it opens in a few weeks, but none of them will go as fast as this one. With the help of a long list of aftermarket names, the Ford Motor Company (Ford News) has crafted a 2018 Ford Mustang GT that can be driven on the street while reaching a top speed of more than 200 miles per hour in the right setting.

The 200mph Ford Mustang GT
the 2018 Ford Mustang GT built to hit 200 miles per hour is a typical SEMA car, with changes made to pretty much every portion of the car.

To make the power needed to reach 200mph, the 5.0L V8 has been fitted with a Hellion twin turbo setup and a Borla exhaust system with a tune from HPTuners. There is also a Mishimotor radiator, transmission cooler and oil cooler to help keep temperatures down when pushing the boosted V8 to its limits. In order to put that power to the ground safely, this Mustang has a G-Force driveshaft and G-Force axles which work with the factory 10-speed automatic transmission. Finally, Hoosier R7/A7 tires on Forgeline wheels help with traction on launch while also working to keep the car pointed straight ahead at 200mph.

To help make the 200mph Mustang GT more stable at high speeds, the company has added a RideTech triple adjustable air suspension setup along with Ford Performance front and rear sway bars, while a big Wilwood brake setup (front and rear) helps bring the car down from those insane speeds. However, there is also a parachute mounted out back in case the brakes aren’t enough.

The next key to hitting 200mph with a 2018 Ford Mustang GT was aerodynamics, so this pony car features a unique body kit from Dom Tucci design with a pro mod wing and rear diffuser.

Finally, the inside of this Mustang GT has been beefed up for improved safety, with a Cobra Pro-Fit GT driver’s seat and passenger’s seat, an 8-point roll cage and 6-point racing harnesses.

While we only have the artwork above, this 200mph Mustang GT will make its grand debut when the 2017 SEMA Show opens on October 31st.