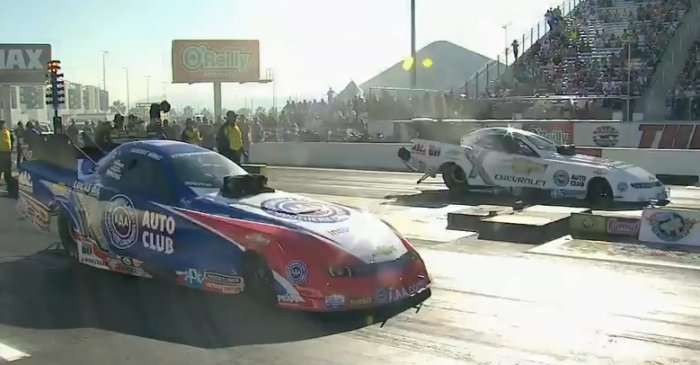 Force Gets First Win in the NHRA Camaro Funny Car

The 2015 season marks the return of General Motors-backed teams to the NHRA big leagues, with the legendary John Force and his team campaigning the new Chevrolet Camaro funny cars. Force and his teammates Courtney Force and Robert Hight came into the season with high hopes for the new Camaro, but the 2015 Dodge Charger spoiled the introduction party, taking the win in each of the first four events. Fortunately for Force, his team and Chevrolet racing fans – the trip to Las Vegas Motor Speedway this past weekend finally brought a Camaro win.

Rough Start for JFR in Vegas
Throughout the first four races of the season, the John Force Racing Chevrolet Camaro funny cars were among the quickest in the field – if not THE quickest. Unfortunately, those lightning quick qualifying runs didn’t translate into event wins. At the Las Vegas event, things went very differently, with the best qualifying Camaro being John Force in the 8th spot. Robert Hight qualified 10th and Courtney Force qualified 13th, so heading into the actual racing, the Camaro team was looking as bad as they had all season.

This was certainly not the start that Force, Force and Hight had hoped to get, but when the real racing begin, things looked much better for the Camaro teams.

Eliminations
In round one, John Force went head to head with Char Head and when Head’s Toyota broke shortly after the start, Force was able to rocket down the track with one of the fastest passes of the first round. Robert Hight went head to head with Ron Capps in one of the powerful Chargers, but when Hight laid down a 4.087 run, he went onto the next round and sent Capps home early. Unfortunately, Courtney Force did not make it out of round one, losing to the Toyota of Alexis DeJoria.

In round two, John Force and his Camaro took on fast qualified Matt Hagan. Force took a slight starting line advantage and never looked back, running considerably quicker and faster than Hagan’s Charger. Robert Hight took on Cruz Pedregon and after the Camaro took a slight starting line lead, Cruz ran into traction issues and shut down, sending Hight into the final four with John Force, Alexis DeJoria and Tommy Johnson Jr.

In round three, Force took on DeJoria and avenged the beating of his daughter Courtney, using DeJoria’s on-track struggles and yet another strong run for the Camaro to head into the finals. In the other half of the final four, Robert Hight took on Tommy Johnson Jr. Hight took the starting line lead and gradually walked away, beating Johnson’s Charger and setting up an all-Camaro final.

The final run for the NHRA funny car class in Las Vegas was the kind of race that you would expect from two former champions like John Force and Robert Hight. The two Camaro-driving teammates went head to head and the race was a side by side masterpiece, with Hight taking the starting line lead, but Force drove around on the top end – taking his first win of the season and the first win for the modern Camaro funny car.

The video below shows the final run between the Camaro funny cars of Hight and Force, so crank up your speakers and enjoy!