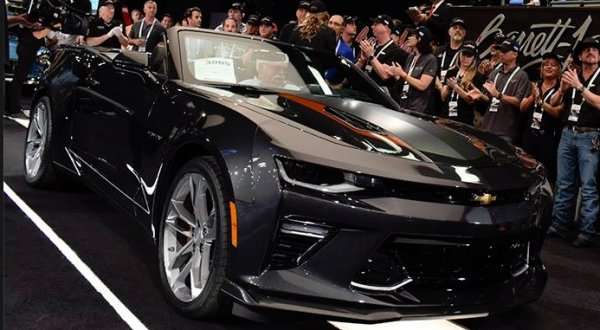 This past weekend in Palm Beach, the first examples of the 2017 Chevrolet Corvette Grand Sport and the 2017 Chevrolet Camaro 50th Anniversary Edition hit the Barrett Jackson auction block, and while they didn’t bring the crazy amounts that past “first units” have brought – they both still raised an impressive amount of money for their respective charities.
Advertisement

Last week we brought you the news that the very first example of the 2017 Chevrolet Corvette Grand Sport and the 2017 Chevrolet Camaro 50th Anniversary Edition would be auctioned off at the Barret Jackson Palm Beach auction. That event took place this past weekend and these two collectable Chevrolet performance cars raised more than $300k for charity.

2017 Corvette Grand Sport VIN #001 rolled onto the Barrett Jackson auction block Friday night and when the final gavel sounded, this high performance American sports car sold for $170,000. That is quite a bit lower than the other C7 Corvette “firsts” that have been auctioned off over the past two years, but that $170k will still play a big part to the folks at the Karmanos Cancer Institute of Detroit.

There has been speculation that NASCAR team owner Rick Hendrick purchased this first Corvette Grand Sport, but we have not been able to verify that. Hendrick has purchased every other “first” C7 Corvette, so he seems like a likely bidder for this one. However, there is no proof that he was indeed the winner of the auction.

This special Camaro was being auctioned off for the United Way of Southeastern Michigan and, like the first Grand Sport Corvette, this GM performance car demanded six figures. When the final hammer hit, the winner paid $150,000 for the first 50th Anniversary Edition Camaro.
So, compared to past “first unit” auctions, these two 2017 Chevrolet performance cars proved to be great bargains for the winning bidders – while also raising $150k and $170 for the two charity groups.