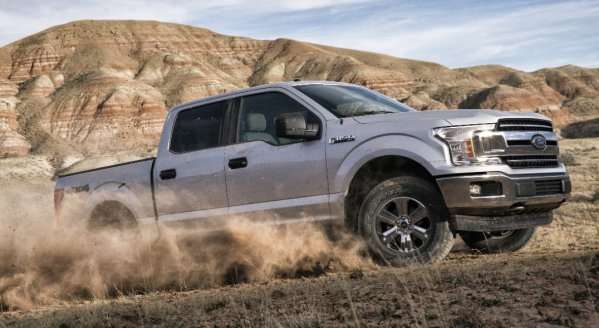 Ford announced at the 2017 Detroit Auto Show that the 2018 F150 will get a new PowerStroke 3.0L diesel V6, but the automaker didn’t offer any details on that new engine, so today we look at the possible engine details for the first diesel-powered half ton F-Series pickup.
Advertisement

Ford Motor Company rolled out their refreshed 2018 F150 at the 2017 North American International Auto Show in Detroit and while the new look of the half ton F-Series pickup was the main attraction for most attendees, the bigger news with the 2018 F150 is the arrival of the long-awaited diesel engine option. After spending the past few years (if not longer) speculating on the future of a diesel F150, Ford offered only the most basic details on their newest half ton engine, leading to more speculation – like the piece that you are reading right now.

What we know is that the 2018 Ford F150 will have an “all-new 3.0-liter PowerStroke diesel engine, designed, engineered and tested in-house and paired with the 10-speed automatic transmission”. We don’t get any further specifications, so we have no idea how much horsepower or torque this engine will offer, but do two things:

1. The 2018 Ford F150 diesel will be marketed to compete with the Ram 1500 EcoDiesel, so the Motor Company will likely work to make their small diesel engine more powerful and more fuel efficient than the Ram diesel.

2. Ford Motor Company designed the 3.0L diesel V6 at use in the current Land Rover portfolio, so while the diesel engine in the 2018 F150 is said to be all-new, we know what Ford has been capable of in the past when designing small diesel engines.

2018 F150 Diesel –vs – Ram 1500 EcoDiesel
The most fuel efficient half ton truck sold in America right now is the Ram 1500 powered by the 3.0L EcoDiesel V6. That engine provides the Ram 1500 with 240 horsepower and 420lb-ft of torque while achieving 21mpg around town and 29mpg on the highway (rear wheel drive models only), so those are all figures which the Ford will plan to beat with their 2018 F150 diesel.

Basically, we can bet that the benchmark for the Ford trucks engineering team when building the 2018 diesel-powered F150 are 240 horsepower, 420lb-ft of torque, 21mpg city and 29mpg highway. Fortunately for Ford and prospective buyers, the Motor Company should be able to achieve these numbers with their all-new 3.0L PowerStroke diesel V6. I believe this because the company already builds an engine for the US market with more horsepower and torque for the current Ranger Rover.

Ford’s Current 3.0L Diesel V6
Ford Motor Company has never offered an engine like this in the F150, but the automaker already builds a 3.0L turbo diesel for the current Range Rover. That engine is part of a partnership between Ford, Peugeot, Jaguar and Land Rover, so some variation of a small Ford V6 diesel is offered in a collection of vehicles from those brands in a collection of global markets.

In the US, Land Rover uses a 3.0L diesel in the Range Rover which delivers 254 horsepower and 443lb-ft of torque, so even if Ford transplanted that engine into the 2018 F150, they would already have a power advantage over Ram.

Also, in the four wheel drive Range Rover fitted with an 8-speed automatic transmission and a curb weight of right around 4,700lbs, the current Ford-built 3.0L diesel offers fuel economy numbers of 22mpg in the city and 28mpg on the highway. Figure that the 2017 F150 4WD curb weight varies from 4,300lbs to 5,000lbs (not including Raptor), so depending on the cab and bed configuration chosen, the 2018 F150 should be a relatively similar weight to the Range Rover. If the new diesel F150 offers the same fuel economy numbers as the Range Rover, Ford would have the advantage in the city, but the Ram would have an advantage on the highway.

The New PowerStroke 3.0L V6
So if Ford already builds a 3.0L V6 for the US market which offers more power and (in theory) similar fuel economy to the Ram 1500 EcoDiesel, why is the automaker building an all-new engine?

Well, a great deal has changed since Ford first started building these engines for Land Rover back in 2004, so the odds are good that with new technology, Ford’s engineers can and will create a new 3.0L PowerStroke diesel which will not just beat the Ram EcoDiesel – but it will also beat the 3.0L V6 diesel that Ford builds for Land Rover. By applying new technology to the current 3.0L turbo diesel V6, Ford will likely squeeze out more power while also making the engine more efficient.

In other words, Ford is building a new 3.0L PowerStroke diesel for the 2018 F150 so that they have an even better engine than their current offering for Land Rover. Ford could use the Land Rover diesel and they would likely be able to offer slightly better figures than the Ram EcoDiesel, but with this new PowerStroke – the Motor Company is likely looking to claim the title of America’s most fuel-friendly half-ton truck by an even bigger margin.

Greg Faulkner wrote on April 4, 2017 - 7:35am Permalink
It's a shame that we will now get a third, great little, thrifty diesel engine designed for pickup trucks that are best suited for the lower trim levels and configurations and utility versions of that truck with great mpg for money-conscious, energy conscious consumers; but like the other two great, little diesel engines on the market; Ford will also greatly limit consumer access to this great little engine and instead plant them only in the higher-trimmed, larger configured, higher utility level versions of those trucks north of $40K and market them as heavy haulers and towers when they are not. And so the versions of the F150s that will be best suited for a modestly-powered but thrifty diesel, will not even have the possibility of having that engine under the hood. The engine will instead be in the larger, heavier and more expensive versions of the truck where it doesn't belong.
tony baumberger wrote on May 15, 2017 - 8:48pm Permalink
Can be ordered in any trim you want, 2 wheel drive XL to a king ranch.
Gregory Faulkner wrote on May 17, 2017 - 6:08am Permalink
@Tony. Please provide where you got this information. If true, this would be surely unprecedented. Ram offered (before the diesel cheating scandal stopped sales) the 1500 Ecodiesel starting at or about $38,500 MSRP; minimum quad cab requirement (could not be configured with a regular cab); not sure of that minimum trim level, because one can't price and build one at this time and I can't remember, However, the lowest priced Ram 1500 is at or about $27K MSRP; meaning the cheapest 1/2-ton diesel ever marketed during the clean diesel era has been at or about $11.5K above the base price for a 1/2-ton truck. Ford' F150 has at or about the same base price as a Ram in the std cab, XL short bed; 3.5 liter V6 NA engine, but the base engine will become a 3.3 dual fuel NA V6 for 2018. That truck for 2017 comes in starting just under $27K before destination, MSRP. So this means if it is true that Ford will offer their diesel in every configuration and every trim level, it will surely the cheapest diesel truck sold in America, including the full-size commercial vans and the mid-size twins from GM. We could assume that Ford would not put more than an $8K premium for the diesel engine and 8 speed transmission (probably more like $7K); and that would mean one could get a 1/2-ton diesel with 250ish horsepower and 450ish foot pound torque, and the fuel economy 1/2-ton champ for less money than the cheapest Colorado/Canyon Duramax. The latter starts at or about $36K. So even if Ford requires $8K more for the diesel; if they offer it at the lowest trim and configuration; it would still be under $35K. I'd have to see this published by Ford to believe it, because it not only would mean less money for a diesel, but it'd also mean more truck buyers with different needs, including fleet buyers, would have the option for a diesel. Would they have enough production capacity from England to keep up?
Gregsfc wrote on October 3, 2017 - 8:34pm Permalink
Two new bits of info are known since this article.Number one, Ram is now back up for sale but has new reduced mpg estimates due to the rework Ram had to do to get recertified and the new numbers are 20 and 27 and 23. That's 1 lower city, 2 lower hwy and 1 lower combined. So Ram Ecodiesel is still the mpg king, but it's only ahead by one hwy and one combined with the same city rating as the Ford 2.7 Ecoboost for MY2018. THE other bit of news is that we now know the configurations for the upcoming Ford PowerStroke. Super Cab and Crew Cab in 2WD, 6.5' and 5.5', respectively. And for 4WD, only crew cab 5.5' bed. We still don't know trim levels, but we already know that the PowerStroke diesel will be the most restrictive of all Ford F150 engine offerings. See...I told ya.