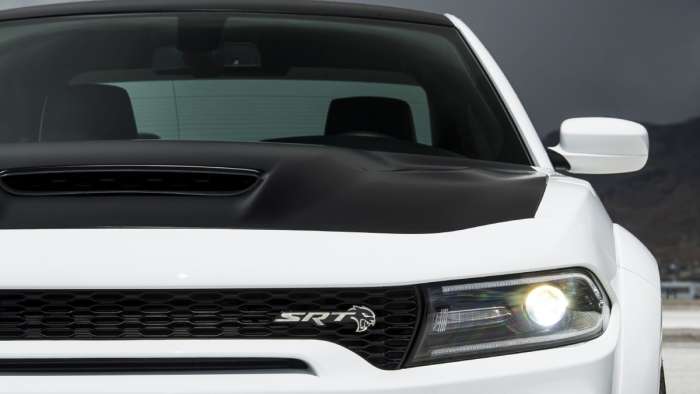 While we have focused on the 797-horsepower Redeye version, the “standard” 2021 Dodge Charger SRT Hellcat also gets some upgrades for the new model year, including a bump to 717 horsepower and the same new hood from the Redeye that feeds cool air to the engine.
Advertisement

The biggest piece of news involving the 2021 Dodge Charger is the long awaited arrival of the SRT Hellcat Redeye version with 797 horsepower and 707 lb-ft of torque. Thanks to input from our contacts within the company, we knew that Dodge would eventually introduce the Redeye sedan, but after much speculation, it is official. The world’s most powerful, quickest and fastest production sedan is set to go on sale later this year, but when it does, the “standard” Hellcat Charger will go on sale as well.

While the non-Redeye version doesn’t pack 797 horsepower, it does get a slight bump in power for the new model year along with a sharp new hood.

2021 Charger Hellcat – 717hp
When the 2020 Dodge Charger SRT Hellcat Daytona 50th Anniversary Edition was introduced with 10 extra horsepower, it seemed very likely that the standard Hellcat Charger would get that power in the near future. The extra 10 horsepower is added by means of a new engine tune that revs the engine up to 6,100 rpm. There are no actual component changes to get that extra power, so after making the 717-horsepower exclusive to the limited edition Daytona models for 2020, it makes perfect sense to give the standard Hellcat Charger the higher redline and the 10 extra ponies.

The torque output of the 2021 Charger SRT Hellcat remains at 650 lb-ft. With the standard widebody design and 305-millimeter wide tires, the stock 2021 Hellcat Charger can cover the quarter mile in just 10.96 seconds at a speed of 125 miles per hour. Top speed for the 717-horsepower super sedan is 196 miles per hour.

New Hood with a Familiar Design
The 2021 Dodge Charger SRT Hellcat Redeye was introduced with a new hood, but the 717-horsepower Hellcat sedan will also wear this hood for the new model year. You may have noticed that it is similar to the original Hellcat Charger hood design, with a front-facing hood scoop and a pair of heat extracting vents. However, the front-facing scoop on the 2021 model is wider and closer to the leading edge of the hood, with a larger raised area behind the scoop. Also, the heat extracting vents are shifted towards the rear of the 2021 hood whereas the vents on the earlier Hellcat sedans directly flanked the hood scoop. 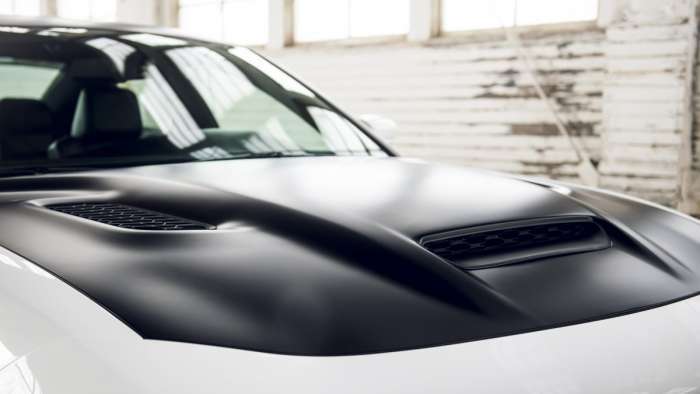 Here is a look at the 2020 Charger SRT Hellcat hood for comparison. 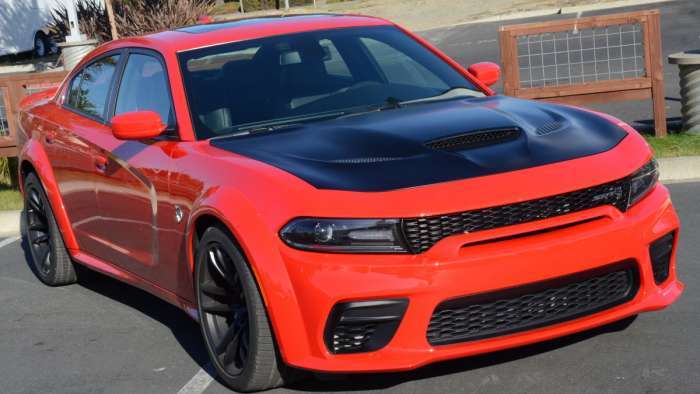 Finally, what you can’t see in these pictures of the 2021 Charger Hellcat hood is the fact that the front-facing scoop is part of a sealer engine air intake setup. In the previous Hellcat Chargers (and 2015-2017 Hellcat Challengers), the front-facing scoop simply fed cool air into the engine bay. That scoop did not connect to the engine air intake system, but for 2021, the Charger’s intake air gets a bit cooler thanks to the sealer hood scoop path. There are also cool air intake ports behind the grille and in base of the air box, near the driver’s side front wheel opening.

Ultimately, these design to get air to the engine from three different points was more for the benefit of the Redeye, but it will benefit drivers of the 717-horsepower 2021 Hellcat Charger as well.

Note: the 2021 Dodge Charger SRT Hellcat shown here in white with black trim is a Redeye model, but the non-Redeye, 717-horsepower version will have the same exterior design as the Redeye.

High Performance Technology
Finally, all 2021 Dodge Charger SRT Hellcat models come with a variety of high tech performance systems, including Torque Reserve. This was originally introduced on the 2018 Challenger Demon, followed by the Challenger Redeye and Hellcat in 2019 and the Hellcat Charger in 2020. However, the system hasn’t been discussed much for the Charger, so we wanted to provide a quick look at what Torque Reserve does for the supercharged sedan.

Torque Reserve is basically a fancy word for brake-boosting. With a 2015 Hellcat Challenger or Charger, for example, if you sit at a stop sign, holding down the brake pedal while easing into the throttle, the supercharger will not begin to build boost. In those models, and in many modern vehicles with a factory forced induction system, you cannot be sitting still, on the brakes and building boost. 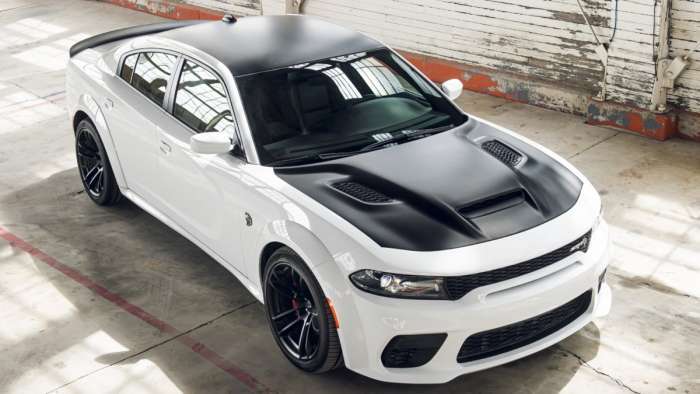 Torque Reserve allows the Hellcat Hemi to build a bit of boost while the car is being held in place. As a result, the engine reaches peak boost and peak output more quickly after a hard launch. This leads to as much as 55% more torque at the point of launch, but realistically, that doesn’t help much with the stock tires. A hard first gear launch with any Hellcat car on the stock Pirelli tires is going to lead to a smoke show. Launching hard in first gear with Torque Reserve just means a bigger burnout. However, add a set of drag radials and the Torque Reserve system becomes a much bigger benefit, leading to better low end power during quarter mile runs.

In addition to Torque Reserve, the 2021 Charger SRT Hellcat with 717 horsepower will also come with Launch Assist, Launch Control, Race Cooldown Mode and Line Lock, all of which were standard on 2020 models as well.