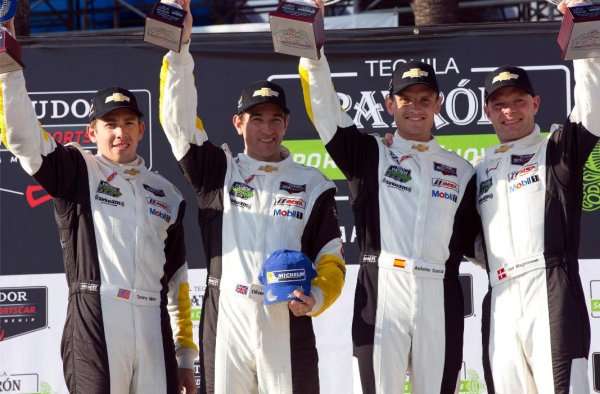 The Corvette Z06 Based C7.R Gets Historic First Win at Long Beach

The new Chevrolet Corvette Z06 based C7.R race car might have gotten a slower start than many expected, but none of that matters anymore as the new Corvette race car claimed what will likely be the first of many wins this past weekend at the TUDOR Sport Car Showcase at Long Beach.
Advertisement

The Chevrolet Corvette C7.R race teams came into this past weekend’s TUDOR United SportsCar Championship race in Long Beach California with the hopes of exercising the mechanical demons that have plagued them throughout the 2014 season. After looking strong early at both the Rolex 24 at Daytona International Speedway and the 12 Hours of Sebring, the #3 and #4 Corvettes both ran into mechanical troubles late in the race to kill their chances of grabbing a podium spot.

In the first two practice sessions, the Chevrolet Corvette C7.R teams looked sharp with the #4 Corvette turning in the fastest time in practice #1 and the third fastest time in practice #2 while the #3 Corvette posted the fourth fastest and second fastest times in the two practice sessions. These strong practice runs were followed up by equally strong qualifying runs, with the #3 Corvette driven by Jan Magnusson and Antonio Garcia claiming the top spot in GTLM (9th overall) while the #4 Corvette driven by Tommy Milner and Oliver Gavin starting in 4th in GTLM (12th overall).

This sounds great, but the Corvette C7.R race teams look strong in previous practice and qualifying sessions earlier this season only to falter in the race. However, there were no mechanical problems for the new Corvette race cars at Long Beach and that allowed the #3 car to dominate the race – leading all but one lap within the GTLM class as Garcia and Magnusson cruised to the C7’s historic first racing win. Antonia Garcia started the race in the #3 Corvette, spending the first 41 minutes of the race building a strong lead in the class and when Jan Magnusson climbed in to finish the race, he continued to build that lead.

At one point, Magnusson was 12 seconds ahead of the next closest car in the class and while that gap narrowed to “only” 5.408 seconds, the #3 Corvette still had no real challenge to take the first win of the season and the first win ever for the new C7.R race car.

Things were almost as good for the #4 Corvette, which moved up from its starting spot in 4th to grab a podium spot in 3rd in the GTLM class. Late in the race, Tommy Milner was closing quickly on the #56 BMW Z4, but he ran out of time and was forced to settle for 3rd…which isn’t bad at all. The #4 Corvette also turned in the fastest GTLM lap of the race en route to a podium spot.

Needless to say, the folks at General Motors are pretty excited to see that the 7th generation Corvette has scored its first racing victory. Chevrolet US Vice President of Performance Vehicles and Motorsports had this to say about the impressive first win by the C7.R, courtesy of the Corvette Racing team website:

"Congratulations to Jan Magnussen, Antonio Garcia and the No. 3 Corvette C7.R team on scoring the win today here at Long Beach. It was the first win for the Corvette C7.R and a great day. It started with a great qualifying run by Jan to put the Chevrolet Corvette C7.R on the pole, which was a huge advantage in a short, 100-minute sprint race. Antonio did a great job getting a nice lead; the Corvette Racing team had a great pit stop and Jan took it home for the win. It was also great to see Oliver Gavin and Tommy Milner put the No. 4 Corvette C7.R also on the podium. Just a tremendous effort for Corvette Racing."

The Corvette C7.R race teams and the rest of the GTLM racers will be in action next on May 3rd and 4th as the TUDOR United SportsCar Championship heads to Mazda Laguna Seca Raceway for the Monterey Grand Prix.