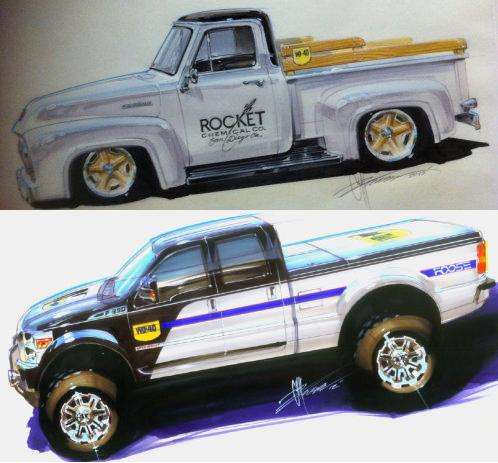 The SEMA Cares charity group and well known custom car designer Chip Foose have teamed up each of the past three years to design a truly unique muscle car in a WD40 paint scheme and while the team got together again for the 2012 SEMA Show – this year the charity build features two unique Ford pickups.
Advertisement

The SEMA Cares group of manufacturers has once again worked with Chip Foose for the 2012 SEMA Show in Las Vegas but unlike past years where the group has devoted all of their time to a single muscle car; 2012 will bring us two customized Ford pickups sporting the WD40 yellow and blue. The two trucks debuting next week are a 1953 Ford F100 and a 2012 Ford F350 Super Duty – both of which sport a Chip Foose design with help from all of the companies in the SEMA Cares group.

“This year, we’re upping the ante and building two vehicles – one that pays tribute to WD-40 Company’s history and one that celebrates some of its newer specialty products that help auto pros like me get the job done right,” said Foose. “With the help of some great aftermarket partners and a lot of WD-40 brand products, we’ll be able to build two vehicles that honor those who work hard every day.”

First off is the 1953 Ford F100, which was designed to commemorate the 60th anniversary of the WD40 lubrication products. Chip Foose designed a “shop truck look” with minimal colors applied to a very classic looking pickup right down to the clearly modern but old school styled Foose rims. The goal was for this truck to look like the same truck that delivered the first case of WD40 products back in the day and the doors even wear the original name of the company for that authentic feel. Foose and the SEMA Cares team updated the suspension to give this truck the sleek dropped look along with a revamped drivetrain – although little is known about what makes this Ford truck purr. This build was carried out with help and/or products from the following companies: Foose Design, Street Scene Equipment, Barrett-Jackson Auto Auction, LMC Truck, L&R Automotive, Egge, MHT Wheels, Pirelli Tires, BASF Paint, American Auto Wire, Painless Performance, Quiet Ride, K&N Filters, Red Kap and McGard.

The second SEMA Cares build for the 2012 SEMA Show centered around a 2012 Ford F350 Super Duty and while the ’53 Ford F100 took a more subdued approach – this truck is a great deal more similar to what we have seen in prior years. Chip Foose has added a custom paint job that puts WD40 logos on the hood, the front doors and the bed cover with the Foose brand logo emblazoned on the bed sides. Details for this build are also limited but the artwork shown on the right looks like the customized 2012 F350 has some massive wheels and tires along with aftermarket lights out front. Helping complete this build were the following companies: Foose Design, Street Scene Equipment, Ford, Source Interlink Media, Icon Vehicle Dynamics, DynaTrac, Custom Truck Shop, BFGoodrich, Magnaflow, Takit, Husky Liners, LEER, Katzkin, Pro Comp, Polk Audio, Audio Innovations and PowerBass.

Both of these Foose-built Ford trucks will make their grand debut next week in Las Vegas before heading off to auctions with the proceeds going to the SEMA Cares charities and the SEMA Cares scholarship fund. The 1953 Ford F100 will hit the Barrett Jackson Auto Auction on January 13th 2013 in Scottsdale Arizona after leaving SEMA and making a few stops at events along the west coast between now and mid January. The 2012 Ford F350 will also be heading to a auction block for charity but as the SEMA Cares group has much more time to spend on tour after SEMA – the group has not yet decided where this modern customized Ford pickup will be sold to the highest bidder.

The SEMA Cares charity raises money to benefit two groups – the Victory Junction Camp and Childhelp. If you are not familiar with these two groups, Childhelp strives to provide services and assistance for kids who have been neglected or abused while the Victory Junction Gang provides life changing experiences for kids who are disabled or chronically ill. These are both great charities and everyone involved with the SEMA Cares charity or the builds that help to raise so much money for the groups deserve a standing ovation for their efforts. Between the customized Chevrolet Camaro in 2009, the Ford Mustang in 2010 and the Dodge Challenger in 2011 – these WD40/SEMA Cares vehicles have raised more than $400,000 in just three years.

“These charity vehicles would not have been possible without the hard work and vision of Chip Foose and his team, as well as the time, energy, dedication and resources of our build partners,” said Tim Lesmeister, vice president of marketing for WD-40 Company. “After raising a combined $400,000 for SEMA Cares with our last three project vehicle builds, we expect these trucks to turn a lot of heads and continue to help a great cause.”

While TorqueNews will be covering all of the exciting custom vehicle debuts at the 2012 SEMA Show, the pair of WD40-themed Ford pickups will definitely be two vehicles that we make sure to bring to our readers. I expect them to be awesome trucks for an awesome cause. Stay tuned to TorqueNews for more information and high resolution images of these two trucks once they are unveiled next week at SEMA.