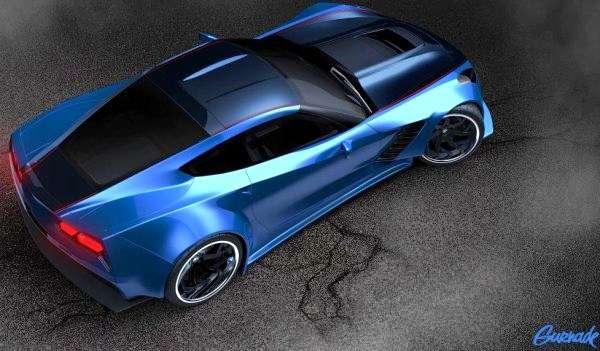 It is May 28th, 2014 and while the 2014 SEMA Show is almost 6 months away, we already have out look at the first possible preview in the form of the new Chevrolet Corvette Stingray wearing an elaborate widebody package from Gurnade. Yes, SEMA previews already… and it’s a good one.
Advertisement

The 2014 and 2015 Chevrolet Corvette Stingray will likely be one of the most popular cars on the floor of the 2014 SEMA Show in Las Vegas and after seeing how incredible the Stingray looks with the widebody design of the 2015 Corvette Z06, we should expect to see at least a handful of widened C7 Stingray fastbacks and convertibles. Today, the folks at Gurnade posted the picture above of a rendering that they’ve drawn up for an unspecified customer based on the new Corvette fastback. Provided that the customer likes the direction, this car could be on display at the 2014 SEMA Show.

As you can see, the Gurnade widebody package for the C7 Chevrolet Corvette Stingray fastback has a similar, yet very extreme, design to that of the production level Corvette Z06. Massive front and rear wheel flares are drawn way out to make room for a set of huge gloss black Forgiato wheels. There is a much more aggressive front fascia with a pronounced splitter that is much more aggressive than the Z06 – almost being as race ready looking as something that we would see from an endurance race car.

This Corvette appears to have side sills that reach much further towards the ground than the factory issue Stingray or the Z06 while the rear end appears to have a massive splitter extending out from under the custom rear fascia.

While it is a little tough to tell from the initial two drawings of the Gurnade Corvette Stingray, it looks like there might be a custom hood with a raised center section and a larger heat extracting vent. Of course, there is also the stunning deep metallic blue paint with a matte black center section that is separated by a thin red pin stripe. You may not love the body kit – but it is hard to argue that this paint scheme looks incredible.

Best of all, should this mean looking 2014 Chevrolet Corvette Stingray fastback project move to the production phase, it will likely have a duty far beyond just looking pretty at the 2014 SEMA Show in Las Vegas. The Gurnade Stingray may also spend some time on the Rev-It-Up for Wounded Warriors Memorial Tour as one of the group of super modified high performance vehicles that travel around the country to raised money for the Wounded Warriors program.

This Corvette Stingray looks great on paper so I really hope that Gurnade’s client likes the look enough to make this vehicle a SEMA Show reality. It will most certainly be a star attraction for whichever company has it on display in their booth.