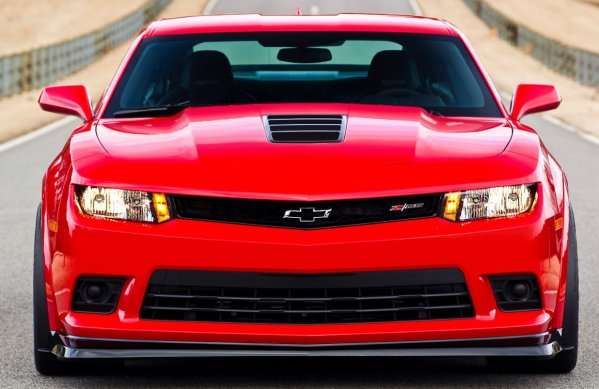 The Chevrolet Camaro Z/28 has been rightfully billed as the best handling American muscle car of all time, but with the introduction of the new Ford Shelby GT350 Mustang, the Z/28 could have a real battle on its hands in order to hold onto that title.
Advertisement

The Chevrolet Camaro Z/28 is really unchallenged in staking its claim for the best handling and most track capable American muscle car, and while models like the previous Shelby GT500 Mustang and the new Hellcat Challenger might make short work of the Z/28 on a drag strip, the Z/28 is an unstoppable force on a road course. The best handling Mustang of all time was the Boss 302 from the previous generation and when engineering the 2015 Mustang GT, the Boss 302 was the benchmark for that process. Unfortunately, the Camaro 1LE – which is little more than a Camaro SS with a collection of high performance handling goodies – made short work of the Mustang GT with the Performance Pack so it is clear that the Mustang GT had no real shot of challenging the Camaro Z/28.

However, the introduction of the new Ford Shelby GT350 Mustang to the mix could force GM to park the 1LE and turn to the mighty Z/28 in order to maintain supremacy of the muscle car road racing title…but is the Z/28 good enough to hold off the new high tech GT350?

Z/28 VS GT350 –Weight and Power
The specifications on the new Ford Shelby GT350 Mustang are still incomplete, but we know that it will weigh less than the 2015 Mustang GT while also having “at least” 500 horsepower and 400lb-ft of torque. Through the introduction of the new flat plane V8 that should cut some of the 444lbs of the 5.0L Mustang GT engine from the engine bay along with other weight saving components, the new Shelby GT350 will almost certainly weigh less than the 3,517 curb weight of the 2015 Mustang GT. My guess is that it will weigh somewhere in the area of 3,400lbs. As for the actual power levels, those are anyone’s guess, but rumors suggest that this new Mustang will have around 550 horsepower and 430lb-ft of torque. Mind you, these numbers are all speculated, but they should be in the general ballpark of the actual numbers.

Galleries of Each:
The Chevrolet Camaro Z/28
The New Ford Shelby GT350 Mustang

On the other hand, we know that the 2015 Camaro Z/28 weighs 3,820 pounds without air conditioning and the LS7 packed under the hood offers 505 horsepower and 481lb-ft of torque. Provided that the estimates above for the new Shelby Mustang are close, we can expect that the GT350 will weigh a few hundred pounds less than the Z/28 while also having more horsepower, but less torque. The broad powerband of the flat plane Mustang V8 could play a big part in equalizing the Camaro’s torque advantage while the difference in both weight and horsepower should allow the GT350 to keep up with or beat the Z/28 on a speed bias road course.

Z/28 VS GT350 – Handling
While the 7.0L V8 under the hood of the Camaro Z/28 is a big part of what makes this car so impressive, the handling goodies are what make it the most track capable muscle car ever. The Z/28 features a unique Dynamic Suspension Spool Valve (DSSV) damper setup that is constantly working to optimize handling capacities when on the track. This system also allows the driver to pick a suspension setting that is more pleasant for road use, but this discussion is about what the cars can do on the track and when on the track, the Z/28 suspension is always making adjustments at all four corners to help the Camaro get in and out of turns as quickly and as smoothly as possible.

The new Ford Shelby GT350 Mustang also has a high tech suspension setup of its own, using a magnetic ride setup to perform the same instant changes to optimize handling on the track. Based on the description from Ford, this system is similar to what is used in the Camaro ZL1 and the Corvette Z06 so while it will make this Mustang the best handling ever, it might not be quite as functional as the system in the Z/28. At the same time, the advantage in weight and power could allow the Mustang to make up any ground gained by the Z/28s suspension setup over the Mustangs new MagneRide system.

Where the Camaro Z/28 could have a big advantage is in braking, where the Chevy features a very high end carbon ceramic setup that makes this one of the quickest stopping cars sold in the world. The GT350 has massive brakes measuring 15.5 inches up front and 15 inches out back, but it will be interesting to see if this lightweight traditional braking assembly can keep up with the high priced carbon ceramic setup. Again, the weight difference could come into play here, but it is hard to imagine that the Mustang will be able to stop as efficiently as the Camaro.

Who Wins?
Really, I think that this is too close to call based simply on specs, but on paper, the new Ford Shelby GT350 Mustang should be the first car to really challenge the Chevrolet Camaro Z/28. The Mustang should have an advantage in weight, horsepower and possibly weight distribution while the Camaro has what seems to be the more effective suspension and braking system…but with this being a battle of inches, it will come down to which car can lay down the quicker lap when the two are pitted head to head. With the GT350 expected to arrive in the Spring of 2015, it could be a few months before we see these two duking it out – but the battle should be a great one.