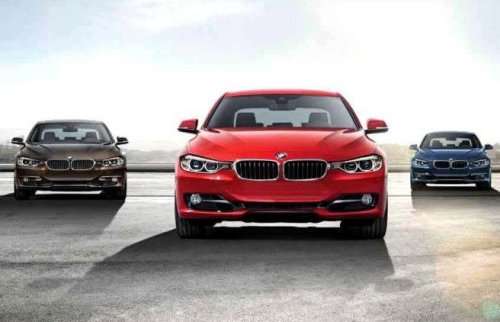 Today in Munich, the 2012 BMW 3 Series was introduced to the world with a streaming feed on the BMW Group Facebook page offering Bimmer fans around the world a chance to meet the new, larger 3 Series at 4pm Munich time (10am EST).
Advertisement

The BMW 3 Series has become the standard of the world automotive industry for sporty midsized sedans and the introduction of the 2012 BMW 328i and 335 shows us a car that will go a long way in maintaining the 3 Series’ glowing reputation. The 2012 BMW 3 Series has been enlarged by small amounts across nearly every dimension with the result being best reflected inside as rear riding passengers will get some extra leg and head room. However, the biggest change is the look of the new BMW 3 Series is the exterior which is more aggressive and – while it is hard to imagine – more upscale looking than the current 328i and 335i models.

The front end of the new 2012 BMW 3 Series shows the most obvious changes with a wider, more prominent front end carrying a new set of kidney shaped grille openings and large headlights that melt into the grille openings. Where the current BMW 3 Series has sharp, angular lines that run top to bottom that separate the front fascia into distinct areas, the new 328i and 335i has a front fascia design that flows from side to side; with the hood line along the top of the headlights and grille providing a very angry look – like the new 3 Series is mad that someone might try to compare another car to it. Finally, along the bottom of the front fascia is an additional cooling opening flanked by blacked out foglight bezels accented with chrome with an angular design to further bolster the new, aggressive look.

Across the back end of the 2012 BMW 328i and 335i, we find a raised trunklid with sharper lines than the current 3 Series models. This helps give the new 3 Series a sportier stance along with adding more cargo space in the trunk. The taillights of the new 3 Series are similar in design to the current models although they’ve been enlarged with a protruding body line just below the license plate area adding some attitude to the widened rear end.

The 2012 BMW 3 Series (at launch) has two engine options; the first being a new turbocharged 2.0L 4-cylinder mill available in the 2012 BMW 328i while the same 3.0L turbocharged inline-6 returns for the 2012 BMW 335i. The turbocharged 2.0L packs 240 horsepower and 260lb-ft of torque, allowing the new 328i to dash from 0-60 in just 5.7 seconds while also achieving better fuel economy than the previous BMW 328i (actual fuel economy numbers will come at a later date). The N55 3.0: inline-6 from the 2012 BMW 335i offers the same 300 horsepower and 300lb-ft of torque as the current models but thanks to the addition of Start-Stop Technology, Brake Energy Regeneration, an ECO PRO mode and new eight-speed automatic transmission the new 3 Series should offer improved fuel economy – up to 32.6 miles per gallon in the proper configuration (according to BMW, actual EPA numbers may vary).

The 2012 BMW 3 Series will be offered in four different trimlines when they reach dealers next February; Sport Line, Luxury Line, Modern Line and M Sport Package. The Sport Line includes gloss black trim on the outside with gloss black and red accents around the interior (shown in the gallery on the right). The Luxury Trim packs plenty of chrome all over the new 3 Series, inside and out, with a set of unique 18” alloy wheels while the Modern Line replaces much of the Luxury Line’s chrome with satin silver trim and a set of turbine style 18” wheels complete that “modern” look. Finally, the M Sport Package begins with an aero package, your choice of unique M designed wheels, M Sport Suspension, an M-level short throw shifter and other performance oriented goodies inside and out.
The first 2012 BMW 3 Series models to reach US showrooms will be the standard 328i and 335i with the all wheel drive 328i xDrive and 335i xDrive models are set to arrive in the summer of 2012. We can also expect the new ActiveHybrid 3 to hit the market later in 2012 with a gas electric hybrid drivetrain producing 335 horsepower and 330lb-ft of torque while also likely offering unsurpassed fuel economy in the mid-sized luxury sport sedan segment.

Pricing and actual fuel economy numbers will be unveiled closer to the arrival of the 2012 BMW 3 Series in dealerships around the country. Check out the gallery on the right for a closer look at the new 3 Series!

Anonymous wrote on November 19, 2011 - 12:38am Permalink
This model is quite bigger compared to its predecessor. Another good thing is the engine options which gives the new owner the chance to choose their engine preference. I think these <a href="http://www.car-stuff.com/bmwparts.htm">bmw accessories</a> is also a good enhancement to this model.