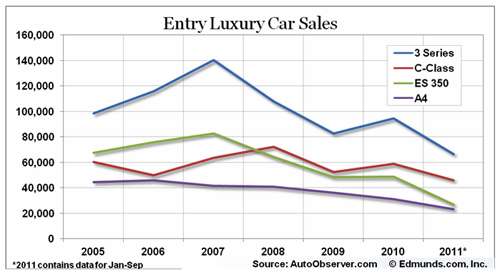 The 2012 BMW 3 series that debuted in Munich has the automotive media abuzz with excitement but it's been borne into a world where it faces tightening competition from the 2012 Mercedes C Class and an overall ennui in the luxury car sales market.
Advertisement

Edmunds says the 3 Series means more to BMW that its mere sales volume. “The 3 Series is still the most significant car within BMW’s lineup and has been for a while,” says Edmunds.com analyst Ivan Drury. “BMW needs to keep the 3 Series at the top of its class, not only for bragging rights, but also because it’s the entry-level car that will hopefully steer buyers on a path to other vehicles in the BMW family for many years to come.”

Just as Mercedes is coming on strong to its German rival the luxury market may be weaking. Almost one in three luxury car owners have a more negative attitude toward purchasing another luxury vehicle in the future, this according to a recent survey conducted by TNS, a global leader in market information. With the unknown future of the European debt crisis, continued economic concerns throughout the U.S. and the potential of slower growth in global auto supplier markets, consumers' fears are building concerns that past sales growth could wane, the report finds.

Among luxury vehicle owners whose attitude toward the segment has been negatively impacted, the most common reason cited, focuses on the current and future affordability of ownership (74%) with insurance and maintenance (43%), also being cited as a pivotal concern for future purchase. "Clearly the high visibility of the recent debt crisis and the ensuing mayhem in the financial markets is causing negative sentiment toward the luxury vehicle segment," says William Bruno, vice president for TNS. "What is most telling is the similar level of negative attitudes expressed by a large portion of existing luxury vehicle owners, as well as non-owners who aspire to own luxury vehicles."

Based on TNS research, luxury brands are going to have to start promoting fuel economy to keep current owners coming back. According to the survey, 19 percent of luxury vehicle owners showing negative attitudes cited the lack of fuel economy in most luxury brands as being the reason they were shifting away from a future purchase. "The high focus on fuel economy is surprising to us, because according to our research, many luxury brands offer competitive gas mileage when compared to similarly equipped, non-luxury, mid-sized vehicles, said Bruno. "The overall perceptions aren't matching up with reality and this is great opportunity for marketers and manufacturers to continue demonstrating the real economics associated with luxury brands."

BMW may be addressing that desire with its introduction of the BMW TwinPower Turbo 2.0-liter engine that produces 240 hp at 5,000 rpm while, thanks to the twin-scroll turbocharging, the maximum torque of 260 lb-ft is developed at 1,250 rpm and remains constant up to 4,800 rpm. In autumn 2012 a new model will join the BMW 3 Series: the new ActiveHybrid 3 – the world’s first hybrid at the premium end of the sports sedan class.