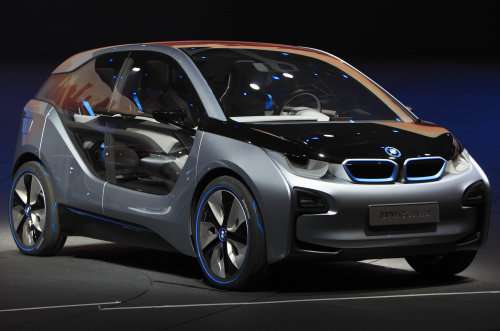 Introducing the new all-electric BMW i3

This morning in Frankfurt, Germany, the folks from BMW unveiled the newest chapter in the saga of the automaker as they introduced the new BMW i8 sports car and the BMW i3 – marking the first all-electric BMW and the formal introduction of the new BMW i-series.
Advertisement

The aggressive compact car shown on the right originally met the public as the MegaCity Concept but we have known for some time that there was a new BMW i-series model coming with the MegaCity look; enter the new BMW i3. While this vehicle is clearly designed with function in mind, the exterior is edgy and futuristic looking – while offering plenty of room for 4 adults. Across the front end, the dual opening grille from the rest of the BMW lineup is displayed with high tech headlights on both sides and out back, BMW has used a super clean look with the taillights integrated into the glossy black rear panel.

The new BMW i3 is a great looking compact with room for 4 adults and lots of storage space behind the second row of seats and the way that the German automaker has achieved this has a great deal to do with their innovative drivetrain setup. The BMW i3 uses a liquid cooled lithium ion battery mounted under the floor and running the length of the car – with the power being send to the rear wheels via an electric motor mounted directly above the rear wheels. This rear wheel drive, rear engine configuration allows for a flat interior floor since there is no need for a transmission hump and the location of the engine relative to the drive wheels helps to eliminate drivetrain loss – thus making the drivetrain more efficient.

The compact electric motor mounted over the rear drive wheels offers 170 horsepower and 184lb-ft of torque; allowing for an emission-free range of 80-100 miles. While pushing the limits of the BMW i3 will hurt your electric range, the I3 drivetrain allows this compact to scoot from 0-62 in under 8 seconds while hitting an electronically limited top speed of 93 miles per hour. Not only does it accelerate well without the help of a gasoline engine, but BMW has designed the rear drive setup to offer excellent driving dynamics that you would expect from the modern BMW lineup. In short, BMW has put together a 4-passenger electric vehicle that focuses on functionality but still offers the important fun-to-drive factor.

The BMW i3 features a Pro Eco mode that alters the throttle and electronic propulsion system that helps to maximize the range capabilities by improving the efficiency of the regenerative braking system. BMW claims that this electric drive system can be fully recharged using a standard wall socket in just 6 hours but if you are using the BMW high speed charging system, the i3 battery can be charged to 80% in just an hour. Also, BMW plans to offer a gasoline range-extending engine that will assist the electric drivetrain in the near future – although no time frame was given as to when the gasoline engine option will become available.

For now, the new BMW i3 offers the modern, aggressive BMW styling with a high tech drivetrain that allows for 100 miles of emission free driving. The i3 has plenty of room for 4 adults and a sporty exterior that will definitely help the new electric BMW stand out from the rest of the typically-bland EV segment. The BMW i3 is currently stated as being a concept but when the production form i3 hits the market, we can expect it to look a great deal like the vehicle shown above – right down to the innovative electric propulsion system.

Addsion Paul wrote on August 12, 2011 - 7:14am Permalink
I wish to have it. And go for the long drive. http://www.autohubinc.com/atv
Anonymous wrote on September 5, 2011 - 7:37pm Permalink
I can see that the new bmw parts and <a href="http://www.car-stuff.com/bmwparts.htm">bmw accessories</a> have greatly improved. This new model is very convenient to drive because of the space, it is more energy efficient, and eco-friendly as well.

Tesla Contemplates A New Strategy for China Retail even As Sales Boom
Jay Leno on Elon Musk & EVs: “I Think He Should Get ... Credit"
END_OF_DOCUMENT_TOKEN_TO_BE_REPLACED