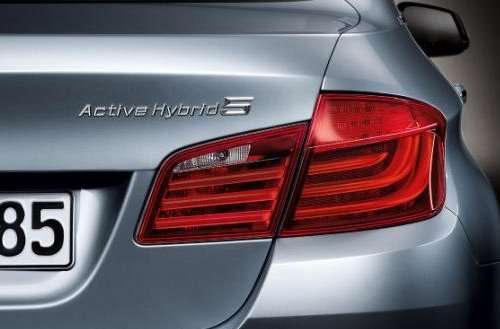 BMW has just introduced the latest addition to their family of high end luxury “green” vehicles with the formal announcement of the new BMW ActiveHybrid 5 Series.
Advertisement

The BMW ActiveHybrid 5 Series (shown on the right) is based on the current BMW 535i sedan and like the less efficient sibling, the ActiveHybrid 5 Series is powered by BMW’s 3.0L TwinPower V6, packing 300 horsepower and 300lb-ft of torque. Helping that power yet efficient turbocharged V6 to offer improved fuel economy, BMW has added an 8-speed transmission with an integrated hybrid drive system that draws its power from a compact lithium ion battery pack. This battery, which was designed specifically for the new BMW ActiveHybrid 5 Series, is placed between the rear fenderwells for protection from any impact and it even includes its own cooling system to help get the most from the electrical capacity. The hybrid drive system provides 55 horsepower of its own and when working in union with the twin turbo 3.0L V6, the total output of the new ActiveHybrid 5 Series is 335 horsepower and 330lb-ft of torque – allowing the hybrid version to dash from 0-60 in just 5.7 seconds. That is the same 0-60 time that the BMW website lists for the standard 2012 BMW 535i so in addition to making the car more efficient, the added power prevents the weight of the system from slowing the car down any.

In addition to helping the 3.0L twin turbocharged V6 get improved fuel economy, the new hybrid drive system in the BMW ActiveHybrid 5 Series also affords the driver the option of all-electric driving up to speeds of 37 miles per hour. The down side to the all-electric driving is that it only offers a range of 2.5 miles when averaging a speed of 22 miles per hour. Based on those numbers, it sounds like the electric mode would be best suited for use when you are creeping through rush hour traffic as when reaching the top electric speed of 37mph, the range of the electrical system has to be very small. However, that range of 2.5 miles would likely be extended if you were sitting in rush hour or road construction traffic, allowing you to drive without using any gasoline over the course of several miles.
BMW has not stated what the fuel economy numbers are going to look like for the new ActiveHybrid 5 Series as we will have to wait for the EPA to have their way with this new hybrid luxury sedan but the German automaker expects double digit percentage increases over the standard BMW 535i. That 535i gets 20mpg around town and 30 on the highway so if the ActiveHybrid version was to see a 10% increase over that (10% being the smallest double digit percentage - so a worst case scenario), the new 5 Series hybrid would offer something like 22mpg around town and 33 on the open road…while also offering the limited all-electric range.

The BMW ActiveHybrid 5 Series is expected by the German automaker to reach American dealerships sometime around March of 2012 and like the fuel economy numbers, the price is currently a mystery. However, as we get into the major American auto show season later this year, we can expect more details on the new fuel sipping luxury sedan from BMW.