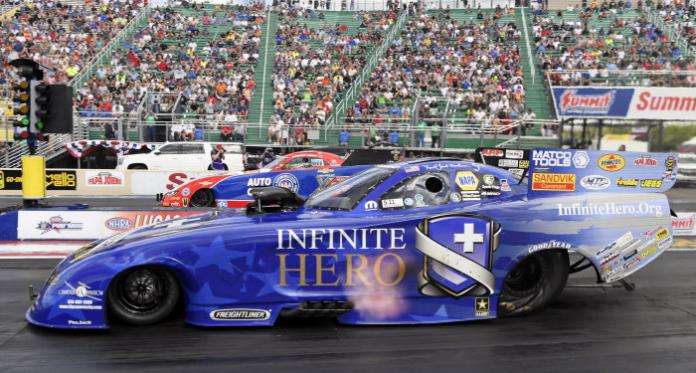 This weekend marked the midpoint of the 2017 NHRA drag racing season, with the teams heading to Summit Motorsports Park in beautiful Norwalk, Ohio for the Summit Racing Equipment Nationals. The stop at Summit is the 12th race of 24 on the season schedule, and for the 11th time in those first 12 races, a Don Schumacher Racing Dodge Charger R/T took the win in the Funny Car class.

In short, the four Dodge Charger R/T funny car teams from Don Schumacher Racing are putting together a season like we have not before seen in the modern era of drag racing and as has been the case at the first 11 races – the DSR teams dominated the class at Summit.

Qualifying
While the DSR Dodge Charger funny cars have been at the top of the order at the end of almost every event, qualifying hasn’t been so kind. There have been several events where the DSR Chargers watched the Camaros from John Force Racing lay down the quickest times in qualifying, but this week, Team Mopar came out on top early.

In the first round of qualifying, Matt Hagan set the pace with a time of 3.881, followed by three Toyota funny cars and then John Force. Ron Capps with 6th fastest in Q1 with a time of 4.42, but for the most part, the first qualifying run wasn’t great for most of the DSR and JFR teams.

In round #2, Hagan went even faster, running a 3.865 and protecting his top position while both Robert Hight and John Force ran strong times to move into 2nd and 3rd. Tommy Johnson Jr made a strong run in the second qualifying round to move up into 5th position while Capps, Beckman and Courtney Force all lingered in the bottom of the field.

In round #3 of qualifying, there were no changes in the top 5 and when Capps failed to turn in a decent run, he slipped to 14th. However, sitting in 17th – one spot out of the race-day field – Courtney Force had to be sweating it heading into the final qualifying round.

Unfortunately for Courtney Force, she failed to put down a solid run in the fourth round of qualifying as well, so for the first time in her career of 131 NHRA events, Courtney Force did not make the race-day field of 16 cars. However, both Beckman and Capps turned good enough times in the final qualifying round to move up a bit in the field.

Eliminations
The first round of eliminations went very well for both Don Schumacher Racing and John Force Racing, with the Dodge Chargers of Beckman, Capps, Hagan and Johnson all winning, as did the Chevrolet Camaros of Robert Hight and John Force (Hight was the quickest car in the first round of eliminations as well). The “problem” was that after the first round, all of the Dodge Chargers were on one side of the ladder, so only two could proceed to the next round. At the same time, that guaranteed that there would be a Don Schumacher Charger in the funny car finals, but it also guaranteed that we would not have yet another all-Dodge final round.

In that second round, Beckman beat Hagan and Johnson (quickest of the round) beat Capps while Robert Hight beat Alexis DeJoria and John Force lost to Bob Tasca III.

In the semifinals, Jack Beckman grabbed a starting line advantage on Tommy Johnson Jr and turned it into an easy win when Johnson ran into problems around half track while Robert Hight got the free pass when Tasca redlit. Even with the free pass, Hight ran the quickest run of the third round of eliminations.

In the finals, Jack Beckman and his Dodge Charger faced off with Robert Hight and his Chevrolet Camaro. The Chevy had a small starting line advantage, but when he ran into traction issues just after the launch – Beckman cruised to the win.

That is Jack Beckman’s second win in three weeks, the 9th win in a row for Don Schumacher Racing in the Funny Car class and the 11th win in 12 races for the Dodge Charger funny cars. The only event that DSR did not win was claimed by John Force.

Championship Standings
On the season, Ron Capps holds a comfortable lead over Matt Hagan in 2nd and Jack Beckman in 3rd. Robert Hight is the highest positioned non-Dodge in 4th place and Tommy Johnson Jr is 5th.

LG's New EV Battery Plant Is a Welcome News for Tesla
Tesla Giga Berlin's New Hurdle: It's Not Only the Gov't, but Now Tesla Itself
END_OF_DOCUMENT_TOKEN_TO_BE_REPLACED