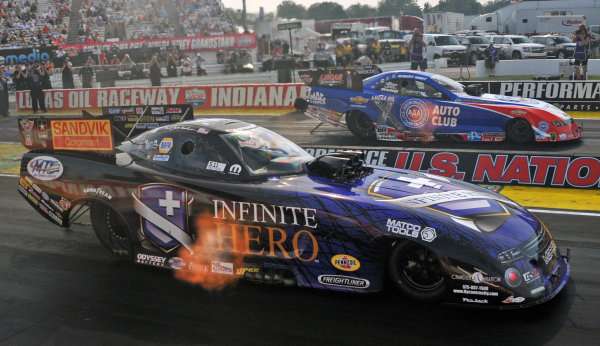 The domination of the NHRA Funny Car class by the 2015 Dodge Charger teams of Don Schumacher Racing continued this past weekend, with Fast Jack Beckman winning his 6th of the season and the 14th win in 18 events for the Schumacher Charger funny cars.
Advertisement

The drivers of Don Schumacher Racing headed into the US Nationals this past weekend with the hopes of picking up their 14th win of the season as a team, after watching Robert High of John Force Racing take his Chevrolet Camaro to the winner’s circle at the previous event. Non-Dodge funny cars have only won 4 of the first 17 races this season and each time a Ford or Chevy won the funny car class – a Don Schumacher Dodge was quick to claim the Wally at the following event.

That proved to be the same case at the 2015 US Nationals in Indianapolis.

Qualifying
The Don Schumacher Dodge Charger funny cars were once again quick from the start of the event, with Ron Capps and Tommy Johnson Jr turning in the 1st and 3rd quickest times in round 1, while Camaro driver Robert Hight found himself sitting between the two Hemi-powered beasts. Capps ran a 4.064 at 308mph, Hight ran a 4.090 and Johnson turned in a 4.117. Jack Beckman turned in a solid 4.282 to sit 6th after the first round and Matt Hagan’s 4.954 put him 12th overall.

After seeing so many 3-second qualifying runs in the past few events, it came as a surprise to see no funny cars running in the 3s for round 1. The 4-second trend continued through much of round 2, until Tim Wilkerson and Robert Hight lined up for a classic Mustang-Camaro battle. Wilkerson ran a track record-tying 3.998 while Hight set the new record with a 3.971 – making that pass the first ever run at Indy where both cars ran in the 3s.

Unfortunately for Hight, that record wouldn’t last long, as Fast Jack Beckman lived up to his name and ripped out an awesome 3.936 – giving him yet another funny car track record. Tommy Johnson Jr and Del Worsham both ran in the 3s as well, allowing them to join Beckman, Hight and Wilkerson in the top 5 after 2 rounds. Capps dropped to 8th, Hagan moved up to 10th and John Hale in the 2014 Charger jumped up into the 12th spot during round 2.

There would not be any more 3-second runs in qualifying, so the order of the top 5 did not change through rounds 3 or 4 and come the end of qualifying, Beckman was 1st, Johnson was 3rd, Hagan was 8th, Capps was 9th and Hale was 13th. The John Force Camaros sat 2nd with Hight, 10th with John Force and 11th with Courtney Force and Tim Wilkerson started 5th in the sole Ford Mustang in the field.

Eliminations
In the first round of eliminations, Jack Beckman couldn’t back up his qualifying run, but his 4.047 was the best of the round while also being more than enough to beat Bob Bode. Teammate Tommy Johnson Jr turned in the next quickest run of the round as he beat John Hale and in another Mopar-Mopar battle, Ron Capps knocked out teammate Matt Hagan.

In round 2, Beckman took on Ron Capps and in beating Capps, Fast Jack was once again the quickest of the round with a 4.057 while Tommy Johnson Jr turned in a solid 4.093 to knock out Courtney Force. Also in the second round, Robert Hight beat John Force and sent his boss packing while Del Worsham’s Toyota beat Tim Wilkerson’s Mustang on a big starting line advantage.

In the final four, Jack Beckman and his 2015 Dodge Charger took on Del Worsham and his Toyota Camry, but when Fast Jack pulled the holeshot – the race was over for the Toyota. On the other side of the bracket, Robert Hight slept at the lights, but problems for Tommy Johnson Jr sent the Camaro into the finals for the second event in a row.

The Finals
While Jack Beckman and his Dodge Charger had been the quickest pair in qualifying and during the first two rounds of eliminations, Robert Hight and his Chevrolet Camaro were close on Beckman’s heels all weekend – including being the quickest car down the track in round 3. In the finals, Beckman pulled a slightly better reaction time and he would need it, as Hight’s 4.045 was quicker than Beckman’s 4.058, but the holeshot advantage was enough for Beckman to hold on for the win.