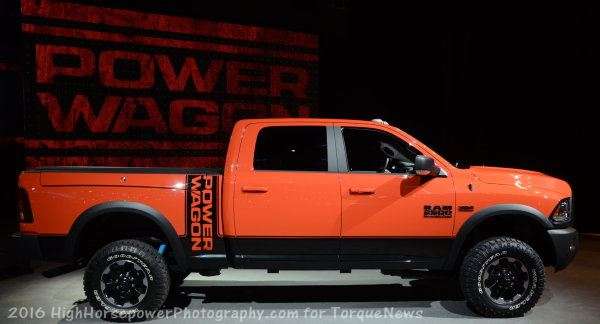 FCA has announced the pricing for the new 2017 Ram 2500 Power Wagon and with a price starting just over $53,000 and climbing up around $57,500, the heavy duty, Hemi-powered Ram truck is priced very comparably to the 2017 Ford F150 Raptor.
Advertisement

The 2017 Ram 2500 Power Wagon is the most capable of the modern Ram pickups, with a greater combination of off-roading ability and working capabilities than anything offered by the competition – with the only possible exception being the 2017 Ford Raptor F150. The Raptor is almost certainly the better off roader, especially when it comes to high speed racing in the dirt, but the ¾-ton Ram Power Wagon offers more working ability while easily being the second-best off-road factory truck on the market.

“The Ram Power Wagon is an off-road, all-access pass, removing the limitations, instilling confidence and allowing owners to reach areas of recreation and lifestyle not attainable with any other pickup,” said Mike Manley, Head of Jeep Brand and Ram Brand, FCA - Global. “The 2017 Ram Power Wagon delivers to those who travel into extreme terrain, while providing the towing and payload capability required in a heavy-duty truck.”

We know now that the 2017 Ram 2500 Power Wagon will start just over $53,000, making it slightly more expensive than the “base” 2017 F150 Raptor, but when the two are all loaded up – the Power Wagon is the less expensive of the two high profile, high performance pickups.

2017 Power Wagon Pricing
The 2017 Ram 2500 Power Wagon comes with the 6.4L Hemi packing 410hp and 429lb-ft of torque, the Crew Cab/short bed configuration, a Bilstein high performance suspension setup, an electronic sway bar, locking front and rear differentials, 33 inch Goodyear Wrangler DuraTrac tires and the unique exterior appointments – including the RAM grille. This truck will move out from a stop in a hurry thanks to the Hemi engine and with the performance suspension components, the Power Wagon is nearly unstoppable in rough terrain.

Finally, the 2016 Power Wagon Laramie package will be offered for a short time during the 2017 model year, but this chromed up Power Wagon doesn’t feature the new exterior goodies from the 2017 Power Wagon. This allows buyers to pick up a Ram 2500 with Power Wagon capabilities and the chrome crosshair style grille rather than the new RAM grille in black. That premium Power Wagon package starts at $59,465, but with the arrival of the new Leather & Luxury package, this 2016-style Power Wagon won’t be around for long.

If you want the 2016 Power Wagon exterior design for 2017, it would be wise to speak with your local dealership as soon as possible.

Toyota's First EV Will Have a Name of BZ: Toyota BZ
First Videos From Inside The Boring Company's Las Vegas Loop
END_OF_DOCUMENT_TOKEN_TO_BE_REPLACED