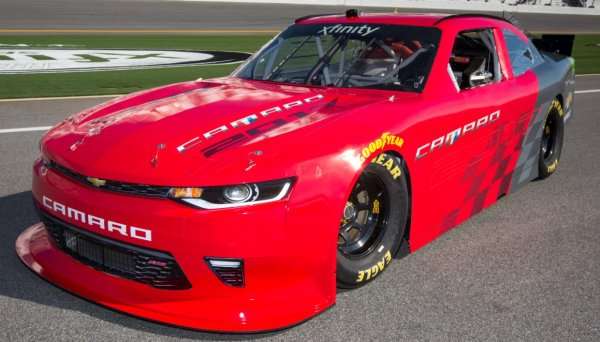 Chevrolet Racing used this past weekend’s festivities at Daytona International Speedway to introduce their new NASCAR Camaro with design cues based on the road-going 2016 Camaro SS – with the official on-track debut planned for the first Daytona event in 2017.
Advertisement

This past weekend, NASCAR fans who headed to Daytona International Speedway for the Coke Zero 400 and the races leading up to the main event got to check out some great racing action, but they were also in attendance for the debut of the next generation Chevrolet Camaro stock car. This new Camaro was there for display purposes only, but for those racing fans who came out to cheer for their favorite Chevy drivers, this weekend offered an exciting look into the future of the brand and the sport as a whole.

2017 NASCAR Camaro Introduction
Each year, two key stops on the NASCAR schedule are the Daytona 500 in February and the Coke Zero 400 on the weekend of the 4th of July – both of which are held at Daytona International Speedway. While the July Daytona race doesn’t get the attention of the legendary Daytona 500, what used to be known as the Firecracker 400 is still a major draw for fans and with that in mind, General Motors chose this year’s Independence Day Weekend event to unveil the next generation NASCAR Chevrolet Camaro.

“For the past 50 years, Camaro has played a key role in Chevrolet’s racing success in winning races and championships,” said Mark Kent, director, Chevrolet Racing. “We look forward to further success with the new Camaro SS in the NASCAR XFINITY Series.”

Now, I imagine that some of you are reading this and thinking about the fact that the current Xfinity Camaro stock cars look a great deal like the 6th gen Camaro at your local dealership. The difference is that the Chevrolet Camaro currently in use is based on the previous generation Camaro stock car with decals that give it the appearance of the 6th gen car whereas the red Camaro race car shown above has unique lines from front to back, so this new Camaro should (in theory) be better than the cars in use today.

For those who are not familiar with NASCAR, the Xfinity Series is kind of like the undercard association, formerly known as the Busch Grand National Series, with the Chevrolet Camaro, the Ford Mustang and the Toyota Camry. On the other hand, the NASCAR “big leagues” is the Spring Cup Series and in that group, the Toyota Camry competes with the Chevrolet SS and the Ford Fusion. Unfortunately, the Camaro will not run in the NASCAR bigs, but for those muscle car fans who like seeing stylized versions of their favorite cars storming around the big oval track, the Xfinity Series will continue to host a battle of the Detroit muscle cars.

With the introduction of the new, more aerodynamic 2017 Chevrolet Camaro, Chevy Racing teams should gain a leg up over their cross-town competition. The official on-track debut will come next February 20th in the Powershares QQQ 300 – the warm-up event for the 2017 Daytona 500.

Finally, for those who missed this weekend’s NASCAR action, Brad Keselowski won the Sprint Cup Coke Zero 400 in a Ford Fusion while Daniel Suarez won the Xfinity Series Firecracker 250 in a Toyota Camry. The best finishing Chevrolet Camaro in the Xfinity Series was the #1 car driven by Elliot Sadler.