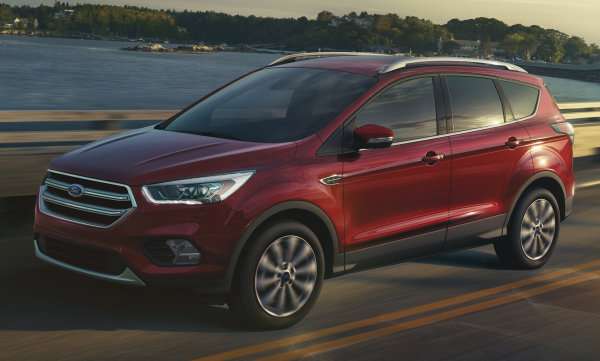 The 2017 Ford Escape Gets Edgier in LA

The 2017 Ford Escape will make its global debut this week at the 2015 LA Auto Show and while this is only a midcycle refresh of the popular compact SUV, it is a fairly elaborate change for one of Ford’s bestselling vehicles in the US market.
Advertisement

The Ford Escape has been one of the Motor Company’s bestselling for years and right now, it ranks second on the company sales chart behind only the mighty Ford F Series pickup. The current Escape was all new for the 2012 model year, but the company doesn’t want their popular little SUV to go stale, so just four years after the Escape on sale today first debuted in LA – the refreshed version destined to arrive for the 2017 model year will also be on display this week and next at the 2015 LA Auto Show.

The 2017 Ford Escape
While the 2015-2016 Escape on dealership lots around the country are only a couple years old, Ford has completely revamped the outside of the 2017 Escape. The roof, the front and rear glass and the doors are all carried over from the current models, but all of the other sheet metal on this new model is unique from the outgoing models. The most noticeable difference comes up front, where the Escape transitions from looking like the Ford Focus to looking more like the Ford Edge, with a grille, fascia and headlight design that is more like what we see on the other Ford SUVs and less like what we see on Ford’s small cars. There are also new LED taillights to match with the restyled front end.

While the Ford Escape is based on the same chassis as the Focus, Ford is wise to make the 2017 Escape follow the styling cues of the larger SUVs and best of all, these changes make for an even better looking SUV. Not that there is anything wrong with the appearance of the current Escape, but this new model definitely has a bigger, bolder design which should allow it to stand out in a very crowded US segment.

Inside, the 2017 Ford Escape is heavily refreshed, from the steering wheel to the dash to the HVAC vents to the parking brake design. Like the other new Ford vehicles, the 2017 Escape has a very upscale design inside and to bolster that high end feel, the Motor Company has added improved cabin insulation, more aerodynamic side mirrors which cause less wind noise, acoustic glass, and an underbody shield – all of which should make the ride of the new Escape quieter than the previous models. Finally, Ford’s new Sync 3 infotainment system comes to the 2017 Escape, bringing with it the new Sync Connect app, which allows drivers to check fuel levels, start the vehicle and control the door locks from their smartphone.

In terms of the drivetrain, the 2017 Ford Escape has two returning engines and one engine which is new to the Escape, but not the Ford lineup. The base engine is a naturally aspirated 2.5L 4-cylinder and that is only available with front wheel drive, while the new 1.5L EcoBoost engine and the returning 2.0L EcoBoost engine are available with both front- and all-wheel drive. No power figures for the 2.5L base engine or the new 1.5L EcoBoost have been stated, but we know that the 2.0L EcoBoost will provide 245hp and 275lb-ft of torque – each of which are +5 compared to the numbers for that engine in the 2015-2016 models. To improve fuel economy, the 2017 Escape will feature grille shutters and EcoBoost models get standard Auto Start/Stop.

The Motor Company sold over 304k examples of the Escape in 2014 and Ford is on pace to sell even more in 2015. The arrival of the 2017 Escape during the 2016 calendar year will help the compact SUV stay towards the top of the Ford sales chart and if these changes resonate well enough with buyers – and I suspect that they will – this midcycle refresh should yield even bigger sales in 2016 and 2017.