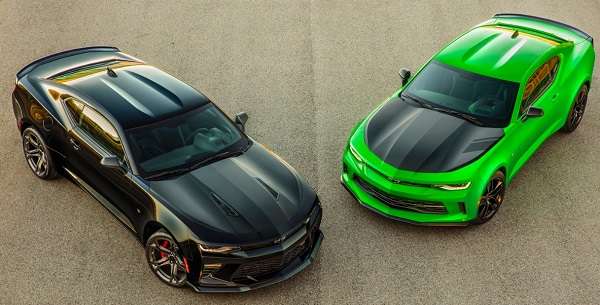 As we speculated last week, the 2017 Chevrolet Camaro 1LE package will debut tomorrow at the 2016 Chicago International Auto Show, but as a nice surprise, the newest 1LE package is offered for both the V6 and V8 models – bringing superior handling capabilities to the masses.
Advertisement

The Camaro 1LE introduced for the previous generation introduced new levels of road handling that had never before been enjoyed in a non ZL1 or Z28 Camaro. The 2017 1LE package follows the course set by the previous generation – focusing on handling and cooling components to improve the track-ready nature of these muscle cars - but where the 5th gen 1LE package was only offered for the Camaro SS, the new handling package is offered for both V6 and V8 models. Introducing the new 1LE package for the V6 models shows that the 6th gen Camaro platform is so good that even the “lowly” V6 can be equipped for a successful day at the track.

Next, the package adds a short throw shifter, the dual mode exhaust system, an engine oil cooler, a transmission cooler and a differential cooler. Finally, V6 1LE owners can opt for Recaro bucket seats that are standard in the SS 1LE

2017 Camaro SS 1LE
Of course, the biggest news is the arrival of the 2017 Camaro SS 1LE, which features the 455hp of the LT1 V8. The 1LE package adds Magnetic Ride Control with the FE4 suspension package, an electronic rear differential with 3.73 gears, Brembo 6-piston front brakes, forged aluminum 20 inch wheels wrapped in Goodyear Eagle F1 Supercar tires measuring 305mm out back. Of course, the SS 1LE also includes the coolers, the exhaust and the shifter mentioned above.

When compared to the current Camaro SS, the newV8 1LE package is three seconds quicker around Willow Springs Raceway – so this relatively simple package makes a big difference on the track.

Exterior, Interior Upgrades
In addition to the performance goodies mentioned above, the 1LE package for the 2017 Camaro adds a satin black hood, a unique rear spoiler, a custom front splitter, the aforementioned Recaro race seats and the Performance Data Recorder is optional for both the V6 and V8 1LE package.

We don’t have any pricing information on the 2017 Camaro 1LE package, but with this road-gripping setup expected to hit showrooms later this year, it shouldn’t be long before we have the pricing for this package.

Based on the success of the 5th generation Camaro SS 1LE, I expect that the 6th gen 1LE package will be a head-turner, even in V6 form.

Tesla Contemplates A New Strategy for China Retail even As Sales Boom
Jay Leno on Elon Musk & EVs: “I Think He Should Get ... Credit"
END_OF_DOCUMENT_TOKEN_TO_BE_REPLACED