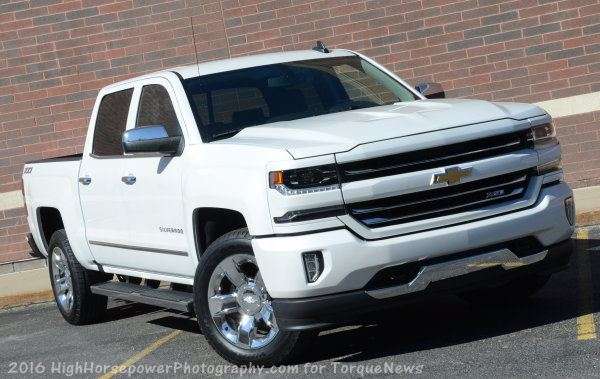 The changes made to the 2016 Chevrolet Silverado 1500 LTZ seem minimal on paper, but the few changes to the exterior and the drivetrain both account for significant improvements – leading to a truck that looks a little better and performs a little better.
Advertisement

The current Chevrolet Silverado 1500 was introduced for the 2014 model year and for the 2016 model year, the half-ton Chevy pickup gets a midcycle refresh which includes a new front end, a new hood, a new transmission for the 5.3L V8 and the addition of Apple CarPlay. Other than those four items, the Silverado 1500 remains unchanged and with the new transmission only coming in trucks with the LTZ or High Country trim, the entire model only really benefits from the hood, the grille and the new sound system feature – but all of these changes improve the Silverado 1500.

The Exterior
If you look at the 2016 Chevrolet Silverado 1500 LTZ Z71 from the sides or rear, you might mistake it for a 2015 model, but from the front, the 2016 Silverado is far handsomer than the previous models.

The biggest change is the new front fascia and grille, which departs from the distinct “stacked” form of the previous Chevy trucks in favor for a look that is far more modern. While there is still a splash of chrome in the grille openings, the addition of the body colored divider running through the middle of the grille plays a big part in giving my 2016 Silverado test truck a far more luxurious look. On other trucks in red or blue, I find that the body colored grille center gives the truck a sportier look, but in the stunning pearl white shown here – this new grille looks much more premium than the previous design. Adding to the premium look of the 2016 Silverado LTZ Z71 are the projection headlights with LED trim and the big, bold lower fascia area, which is also painted body color. The previous Silverado LTZ Z71 was pretty much covered with chrome up front, but even with far less chrome, the newer Silverado maintains the luxury look without all of the sparkle.

In addition to the front end, the 2016 Silverado LTZ Z71 wears a far more prominently sculpted hood, which has a slightly more elevated cowl area for a sportier, bolder look. More importantly, the extra sculpting on the hood and across the front end “fits” better with the sharp lines along the sides of the Silverado.

The current Silverado was criticized for not being “different enough” from the previous generation which ended in 2013, as the face of the truck had the same basic feel. However, the addition of the 2016 grille, fascia and bumper give the new Silverado a bolder, more luxurious look –allowing it to stand out better in a very crowded half ton truck segment.

My test truck had leather seats front and rear, with big, comfortable buckets up front (heated and cooler driver’s seat) and a rear seat which can comfortably handle three adults who don’t mind rubbing shoulders. The cabin size really is ideal for two adults and three kids, but for a work crew or five friends heading to the golf course – the Silverado Crew Cab is a comfortable truck for all. Best of all, there is a wireless cell phone charger on the center console that I absolutely love. In addition to the plush, spacious seats, the 2016 Silverado 1500 LTZ Z71 includes the Chevrolet MyLink infotainment system with an 8” touchscreen that controls every key feature of the interior. For those who don’t like touch controls, the Silverado also has traditional knobs and buttons for the sound system and the climate control, along with a spread of buttons on the steering wheel for the sound system, the cruise control and the driver information screen in the gauge cluster.

When you add up the plush leather seats, the copious amounts of passenger space and the premium infotainment system, the 2016 Silverado LTZ Z71 offers the same level of premium appointments as any of the competitors – so even though nothing has changed, the cabin of the Silverado is still a crowd-pleaser. The Drive
The 2016 Chevrolet Silverado LTZ Z71 is powered by the 5.3L V8, which sends 355 horsepower and 383lb-ft of torque to all four wheels via a new 8-speed automatic transmission. The Silverado 1500 in “lower” trimlines still have the 6-speed automatic, but the addition of the 8-speed gearbox improves performance without hurting drivability. It seems to me that many people who haven’t driven a modern transmission with 8 or 9 gears are concerned that they will spend their time focusing on the transmission bouncing from gear to gear. These critics insist that the constant shifting will be an annoyance, but after spending a week in the Silverado with the new 8-speed, I can confidently say that those concerns are unfounded.

The key advantages of the 8-speed transmission are steeper gear ratios in the numerically lower gears for improved acceleration and a stronger pulling performance while the numerically higher gears have a less aggressive gearset to maintain high fuel economy numbers. Whether you are launching the 2016 Silverado 1500 LTZ from a stop in an effort to outrun another truck or you are accelerating into traffic with a trailer out back, the increased transmission gearing and smaller steps between gears improve acceleration while also providing a smoother transition from gear to gear. Don’t get me wrong – when you are accelerating hard from a stop, the transmission still has the positive pop from gear to gear that you would expect, but under normal driving conditions, the new transmission gets through the gears more smoothly.

During my time with the 2016 Silverado LTZ Z71, I pulled my standard 5,000lb horse trailer and this truck felt like it got away from a stop slightly better, along with smoother downshifts when lots more engine RPM is needed when pulling on the highway. The improvement is very slight, but there is no question that the Silverado with the 5.3L V8 and the 8-speed transmission pulls my test trailer a little more confidently than the Silverado with the same engine and the 6-speed transmission. Along those same lines, when you are cruising on the highway in a situation where the transmission will bounce between 6th, 7th and 8th gear – like when you slightly speed up to pass slower traffic or when you hit a slight uphill grade – the transmission moves from gear to gear so subtly that most drivers won’t notice the shifts at all.

The Final Word
The changes made to the 2016 Chevrolet Silverado are very subtle to someone who isn’t well-versed on the modern half-ton truck segment, but these slight changes go a long way in making the Silverado better than the previous model year. The new face is more modern, more luxurious and – in my opinion – better looking and the addition of the 8-speed transmission behind the 5.3L V8 makes this “entry V8” even better for those who want better low end performance. The new face, new cell phone connectivity and new transmission likely won’t pull a Ford or Ram driver away from their preferred brands, but these slight alterations make the 2016 Chevrolet Suburban an even more attractive option for someone weighing the Chevy half-ton against the competitors.