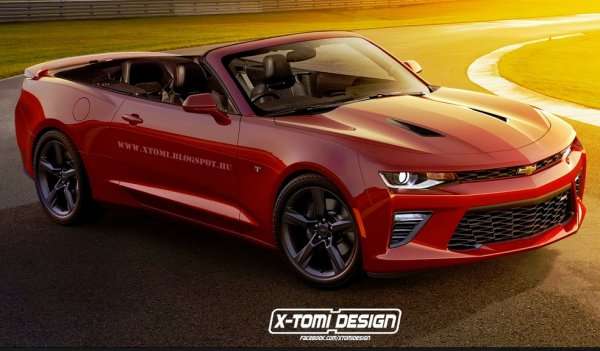 The ink is barely dry on the many articles around the world discussing the debut of the 2016 Chevrolet Camaro, yet there are already renderings of the 2016 Camaro Convertible and the next gen Camaro Z28 popping up online – including these two beautiful images done by skilled automotive artist X-Tomi.
Advertisement

Not surprisingly, when the 2016 Chevrolet Camaro was introduced this past weekend in Detroit, we only got to meet the 6th gen Camaro coupe and only in LT and SS trim. For the 2015 model year, the Camaro coupe is offered in LT, SS, ZL1 and Z28 trim while the 5th gen Camaro convertible comes in LT, SS and ZL1 trim, so while we don’t know when more versions of the 2016 Camaro will come along – we know that they are coming sooner or later.

Two additions to the 2016 Camaro lineup are the convertible version and a high performance Z28 trimline – both of which have been imagined by X-Tomi.

The 2016 Camaro Convertible
One addition that we know for sure is coming to the lineup is a 6th generation Chevrolet Camaro LT and SS convertible (shown above). I fully expect that the droptop 6th gen Camaro will arrive for the 2016 model year, but we don’t know when General Motors will first show it off for the first time. In the past, Chevrolet has used the Frankfurt Motor Show to introduce the world to the refreshed 2014 Camaro Convertible while the Geneva Motor Show introduced the world to the C7 Corvette Stingray Convertible. The 2015 Geneva show was months ago, but the Frankfurt show in September could mark the introduction of the 2016 Camaro Convertible.

Fortunately, X-Tomi has used images of the 2016 Camaro coupe to create a 6th gen Camaro convertible. In every way other than the roofline, X-Tomi’s convertible looks just like the coupe, but the longer rear glass and shorter trunk lid of the Camaro appears to give this 6th gen convertible a roomier looking rear seat than the 5th gen Camaro. It will be interesting if this relatively short trunk lid design will yield a convertible that looks like the X-Tomi rendering.

The 6th Gen Camaro Z28
While the 2016 Camaro convertible is all but a sure thing, there is no guarantee that General Motors will build a 6th generation Camaro Z28. There has been no talk of a new Z28 and with the 5th gen Z28 arriving several years after the 5th gen Camaro was introduced – it could be a few years before we see a new Z28. There is also the possibility that General Motors will follow the form of the 5th gen Camaro, first introducing a less expensive super-Camaro sporting the ZL1 name and the engine from the Corvette Z06. In short, we can rest assured that GM will be bringing out a higher performance 6th gen Camaro – we just don’t know what it will be called or when it might arrive. However, if it is a new Z28, it could look like the X-Tomi artwork in green shown here.

The X-Tomi 6th gen Camaro Z28 is based on the 2016 Camaro SS, but the artist has added a unique lower grille opening with horizontal bars, a deep-reaching chin spoiler, lower side skirts, a large rear diffuser and a low profile rear spoiler. This Z28 also wears unique wheel opening flares, Z28 badging on the fenders and grille, lightweight wheels and a massive braking setup.

If and when a 6th gen Camaro Z28 arrives, there is a good chance that it could look like the green Camaro imagined by X-Tomi.