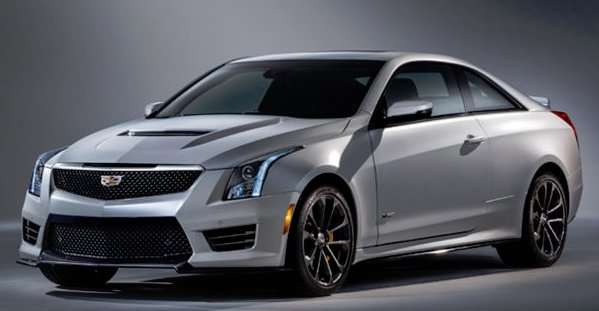 2016 Cadillac ATSV Leaks with Only 450 Horsepower

The first batch of images and information on the 2016 Cadillac ATS-V have leaked and surprisingly, the ATS-V has only 450 horsepower from a specially tuned version of the twin turbo V6 that powers the CTS VSport that is far less powerful than the previous V Series coupe – yet powerful enough to take on the new BMW M4.
Advertisement

General Motors still hasn’t offered up any official information on the 2016 Cadillac ATS-V, but a piece published on the Road & Track website (which has since disappeared) revealed the new ATS-V in official GM photos with just enough details to get us good and excited for the official debut of the Caddy super coupe.

Meet the 2016 Cadillac ATS-V
The details on the 2016 Cadillac ATS-V are limited, but we know a few things for sure from the leaked information. First, the ATS-V will be powered by a specially tuned version of the 3.6L twin turbocharged V6 from the CTS VSport which will deliver 450 horsepower and 445lb-ft of torque. Second, the new ATS-V will come with the buyer’s choice of either a 6-speed manual transmission or an 8-speed automatic transmission – both of which I would imagine are similar to the units at work in the Chevrolet Corvette Stingray. Finally, as you can see in the images here, the new ATS-V has a far more aggressive look than the rest of the ATS coupe lineup, with alterations all around to give this Caddy a proper V Series look.

Now, some of you might be questioning my use of the word “only” in the title and there is a reason that I put that word in quotes above. The 2016 ATS-V has 450 horsepower and 445lb-ft of torque from a twin turbo V6, which makes it an incredibly powerful compact luxury coupe. However, the previous Cadillac CTS-V offered 556 horsepower and 551lb-ft of torque from a supercharged 6.2L V8 so by comparison, the new ATS-V is quite a bit less powerful than the previous V Series coupe. While the ATS-V is technically in a smaller class than the CTS-V, the lack of a new CTS coupe effectively makes the ATS-V the replacement for the old CTS-V and it is surprising to me that GM would go backwards in power of their premium luxury sports coupe. Fortunately, with the CTS-V Coupe weighing in at 4,217 pounds, the ATS-V is some 600lbs lighter.

I had fully expected to see the twin turbo V6 from the CTS VSport in the ATS, but I believed that it would also be labeled as a VSport vehicle rather than a full V Series model since the previous “-V” models all had 556 horsepower. This new ATS-V is the least powerful of the modern V Series cars, but it is far from the least exciting. The new Alpha chassis should go a long way in allowing this new ATS-V to perform as well as the best luxury sport coupes from across the pond – mainly the brand new BMW M4. Of course, the new Cadillac ATS-V will have to prove that the chassis, suspension and braking components perform well enough together to outrun the new M4 coupe in the various venues, but based on these leaked figures – the ATS-V should definitely be able to keep up with the Ultimate Driving Machine.

A Special Thanks to Belgian Max for sending over the images and details.

dwight looi wrote on November 17, 2014 - 4:20pm Permalink
Just bad decision making on the part of GM. The LT1 6.2 V8 -- the naturally aspirated motor from the Stingray -- is not only just as powerful (460hp / 465 lb-ft), it is lighter (by 20 lbs), it is cheaper, it exhibits zero turbolag, it wouldn't have required the hood bulge and perhaps just as importantly it is just as economical on fuel (17/30 mpg on the 3300 lbs Stingray probably 16/28 on the 3600 lbs ATS-V). It will also allow Cadillac to capture the part of the market which would have preferred the V8 M3 and the 6.2L C63 AMG -- now that the europeans have gone to fewer cylinders, smaller displacement and forced induction. With their desire to be more like the Europeans, GM has decided on a "me too" powerplant based on some silly notion that somehow heavier, more expensive, slower, less responsive and not any greener will sell more cars because... well... it's more like the European approach.
Larry O'Johnson wrote on December 26, 2014 - 9:22am Permalink
You are forgetting the important things that has been implied with this car , rather than just sticking a v8 and calling it a day. First of all emissions are getting too strict to easily offer v8's in smaller sized vehicles. Secondly are you nuts? Do you know how much better this engine is compared to an LT1? Yes the corvette is fast but its not the engine it's the chassis. This monsterous torquey v6 with two turbos have so much low end power it'll make you forget about anything you felt in a v8. Im confident at least 550 to the wheels will be achieved easily through tuning and a few tweaks.
Cpholm wrote on April 27, 2015 - 9:46pm Permalink
You do know that the ats-v is a new line, not replacing the cts-v. The next-gen cts-v will have 640 horsepower
Krogue wrote on August 1, 2015 - 3:12pm Permalink
ONLY 450 HP, seriously? Thats base horse power in a Corvette. You are talking super car horse power from 10-15 years ago. Americans need to stop thinking all out horsepower and start thinking balanced sports car like Porsche.