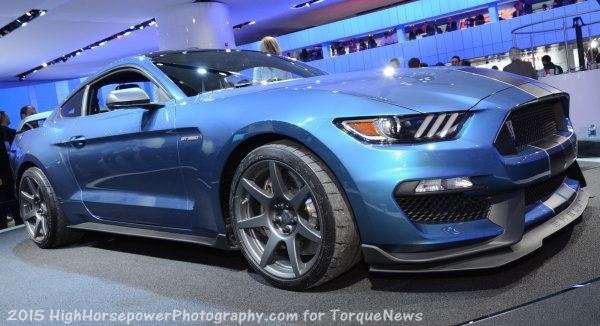 Less than 24 hours after Ford Motor Company finally let us know that the new Shelby GT350 Mustang would be launched as a late-run 2015 model year vehicle, the folks at Mustang6g have gotten ahold of the options and option pricing for the new GT350 and GT350R.
Advertisement

First off, we don’t know the actual pricing for the 2015 or 2016 Shelby GT350 or GT350R Mustangs. There were rumors a while back from a less than reputable website claiming that it would start at $52,995 and the Tech Package would cost $2,995, but that same site has since published a frenzy of fake news stories it looks as though their Tech Package pricing was incorrect – so we don’t know how much the new Shelby Mustang fastbacks will cost. Many people expect them to start in the mid $50k range, but that is all speculation.

However, thanks to the folks at Mustang6g.com, we do have the option information and option pricing for both the GT350 and the GT350R. Again, these are not official numbers from Ford, but the Mustang6g crew has more than proven themselves to be a great source of leaked Mustang information, so I am inclined to believe these numbers. It should be noted that these prices appear to apply to the 2015 GT350 Mustang that we reported yesterday will be limited to 137 units. However, if none of the packages change from 2015 to 2016, I wouldn’t expect the prices to change much either.

Option Pricing for the Shelby GT350
The more plentiful Ford Shelby GT350 Mustang seem to have six available option choices which come with an increase to the MSRP, including the Tech Package, the Track Package, Navigation, a painted black roof, Triple Yellow exterior paint and “over the top stripes”.
The Tech Package costs $7,500 and adds the magnetic ride control suspension system, navigation with Sync 3, dual zone climate control and leather front seats that are heated and air conditioned with power controls.

The Track Package is ideal for those who want to focus on performance, as it costs $6,500 and adds the magnetic ride control suspension, selectable drive modes and an enhanced cooling system for the engine oil, transmission and rear differential.

The standalone options have prices of $795 for navigation, $695 for the painted black roof, $475 for the stripe package and $495 for the Triple Yellow paint.

Option Pricing for the Shelby GT350R
Those folks who opt for the far more track-ready Shelby GT350R Mustang can expect to pay $3,500 to go from GT350 to GT350R. In addition to the same optional navigation, painted black roof and Triple Yellow paint, the GT350R also has a $3,000 SVT Touring Package. There is no solid information on the SVT Touring Package, but it would likely come with create comforts such as navigation, the Sync infotainment system and dual zone climate control.