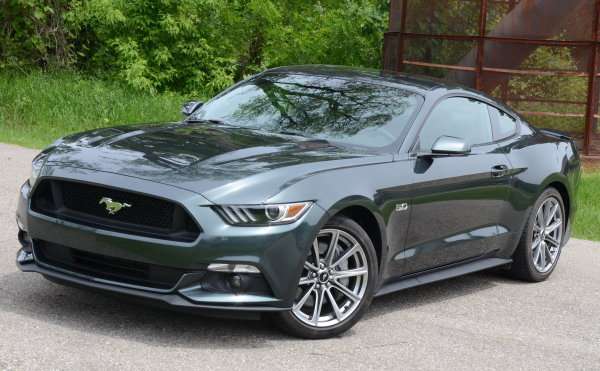 According to a survey by IHS Automotive, the Ford Mustang is the bestselling sports car in the world during the first six months of 2015, with even greater sales expected later this year as the first right-hand drive models reach those markets around the world.
Advertisement

Yesterday we brought you the news that the Ford Mustang led the muscle car sales race in the United States for the 8th straight month, beating both the Chevrolet Camaro and the Ford Mustang by a healthy margin. With the muscle cars being the bestselling sporty cars in the US market, that also makes the Mustang the bestselling sporty car in the country, but according to HIS Automotive, the first global Mustang leads sports car sales on a global level.

Now, before those readers who love to argue semantics head to the comment section to refute the idea of the Ford Mustang being a sports car, let’s address the wording used here. I generally refer to the Mustang, the Camaro and the Challenger as “sporty cars” rather than “sports cars”, as some traditionalists will insist that a proper sports car should be something with as little functionality as possible, including no more than two seats and the smallest trunk possible. These folks will insist that a real sports car is something like that Dodge Viper, the Chevrolet Corvette, the Porsche 911 and other vehicles like those, but it is hard to look at the 2015 Camaro Z28 or the 2016 Mustang Shelby GT350R and say that they are not sports cars.

Whether you like calling a muscle car a sports car or not, when it comes to sporty, performance oriented cars, the Ford Mustang is the bestselling car of this type in the world.

Global Mustang Dominates Globally
Over the past few years, the Chevrolet Camaro has been both the bestselling sporty car in the United States and, based on the HIS Automotive surveys, the bestselling sports car in the world. Even though the Camaro has not been offered with a right hand drive configuration, the simple fact that it was available in more markets outside of the USA – while also comfortably leading in US sales – allowed the Camaro to be the world’s bestselling sports car. However, Ford wanted that to change with the new 2015 Mustang, and the Motor Company succeeded in that effort.

Even though the 2015 Ford Mustang has only been sold in the US and other left-drive markets through the first six months of the year, there have been 76,124 new Mustangs registered around the country. The vast majority of those are in the US, but the new Mustang has already proven to be insanely popular in China and some other left-hand drive markets. Overall, there have been 56% more Mustang registered around the world during the first half of 2015 than there were in the same period last year.
The best news for Ford is that the 2015 Mustang hasn’t even reached several major markets, where buyers have been patiently waiting for the arrival of the first ever factory-built right-hand drive Mustangs.

Right-Hand Drive Sales Boom Coming
While the left-hand drive 2015 Ford Mustang has been on sale for almost a year now, those buyers in markets where they drive on the “other side” have been left waiting. Fortunately, that waiting is almost over, as Ford has launched production of the right-hand drive Mustangs for export to a collection of markets – most notably including the United Kingdom and Australia. There have already been 2,000 orders for the new Mustang in the UK while another 3,000 have been ordered Down Under.

In other words, when the right-hand drive Ford Mustang finally reaches markets around the globe, we can most certainly expect to see a big boom in new vehicle registrations. This will almost surely guarantee that the Ford Mustang will be the bestselling sports car in the world for the 2015 calendar year.

Finally, with the arrival of the 2015 and 2016 Shelby GT350 and GT350R Mustangs here in the United States, Ford’s sports car sales in the US should continue to be very strong through the end of this year and well into 2016.