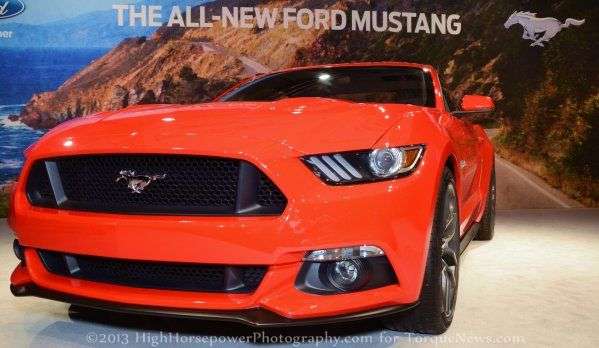 The 2015 Ford Mustang hasn’t even been official for a month and already it is receiving big recognition as it will serve as the Official Car of the 2014 International Consumer Electronics Swho that runs from January 7th through the 10th in Las Vegas.
Advertisement

The Ford Mustang is known for a great many impressive attributes including affordability, performance and the ability to last through 50 years of the always changing auto industry but one area where the Mustang traditionally isn’t considered a front runner is when it comes to high tech gadgetry. With the introduction of the 2015 Ford Mustang, that will all change as the next generation of Ford’s fabled pony car will offer a long list of modern automotive technology that will make it the most high tech car in its segment and – as reasonably priced performance cars go – one of the most modernized cars sold in America. In fact, the 2015 Mustang is so high tech that the show organizers of the 2014 International Consumer Electronics Show in Las Vegas have chosen the new Mustang is the official car of the massive technology expo.

While we have seen a steady addition of higher tech features to the Mustang lineup over the past few years of the current generation, the S550 generation that begins with the 2015 Ford Mustang takes high tech to a new level for the affordable American performance car. Most noticeably, the exterior of the 2015 Mustang wears a set of elongated headlights with HID projection and LED trim with more LED technology at work in the new taillight design. Those new lights look cool but the real tech story with the 2015 Mustang pertains to features which do more than just look cool.

On the inside, the 2015 Ford Mustang will feature Ford’s SYNC connectivity system with MyFord Touch which includes an 8 inch high res touch screen to control the sound system, the navigation, the HVAC controls and the rest of the SYNC features. Ford also added a new AppLink system that allows drivers to download more than 60 Smartphone apps that work with the advanced infotainment system and to keep the driver’s hands free while cruising in the 2015 Mustang – MyFord Touch also features an advanced voice command system. Next up is Ford Intelligent Access system with push button start which uses a proximity system to unlock the doors and the trunk without the driver having to dig the key out of their pocket. That proximity setup works with the Ford MyKey system. MyKey allows up to three drivers to customize their preferred settings such as seating positions and mirror angles while also allowing parents to customize all of the parameters of the Mustang (including the top speed) to keep their kids safe when they take the 2015 Mustang out without adult supervision. Finally, the 2015 Mustang is the first to offer standard independant rear suspension - although we are likely to see some people converting to a solid rear axle for better drag racing performance.

Two of my favorite high tech features of the 2015 Ford Mustang are features that debuted (and I loved) on the 2013 Mustang Boss 302. This includes the Track Apps option in the driver information center and the Launch Control system. Launch Control instructs the driver of how to prepare the car for the ideal hard launch for optimal performance by walking you through each step of the process while electronically controlling the clutch and throttle to help put the power to the ground as effectively as possible. The Track Apps are included in the driver information display in the gauge cluster with options like quarter mile time, 0-60 time, 60-0 braking times, cornering G forces and other basic performance figures. The Mustang will be a blast to drive but knowing exactly how fast you are getting from a stop to 60 or knowing just how long it takes your 2015 GT to run through a quarter mile adds that extra bit of driving excitement. Some smaller high tech features that are included in the 2015 Ford Mustang include things like adaptive cruise control, collision warning with automated brake support, a revised Blind Spot monitoring system, a rear view camera system and individual tire pressure monitors in each wheel. Of course, there is also the high tech drivetrain options that include the new 2.3L EcoBoost that will make the 2015 Mustang the most efficient American muscle car ever.

Ford has stated that when the 2014 International CES in Vegas opens on January 7th, the company will offer detailed information about the high tech goodies of the 2015 Mustang and hopefully included in that is confirmation of the new Burnout Control System that would be an industry first. In any case, the 2015 Ford Mustang has been named the Official Car of the 2014 International CES because there has never been an American muscle car that offered the level of performance and technology for such a low price. The 2015 Mustang brings high tech performance to the masses and attendees at the 2014 CES in Vegas will get a great chance to check out that technology in person.