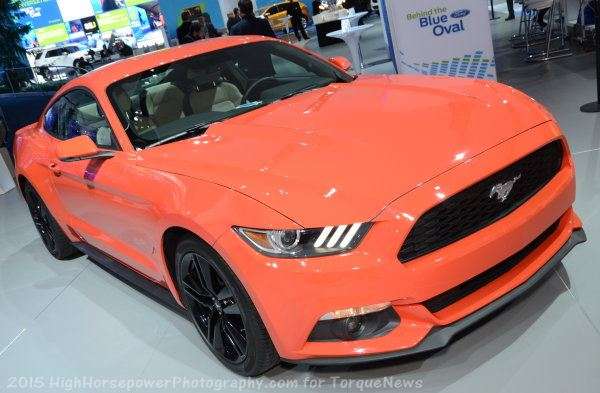 The 2015 Ford Mustang is the Safest, Too

The 2015 Ford Mustang has gotten a great deal of attention for being the fastest, the most powerful and the most efficient Mustang ever, but with the announcement of the NHTSA crash test scores for the new pony car – the 2015 Mustang is also the safest ever.
Advertisement

When we talk about the Ford Mustang – or any other performance car – we focus on things like 0-60 times, horsepower levels, handling capability and even fuel economy numbers. This is particularly true of the 2015 Ford Mustang, as the Motor Company wanted to make sure that the first Mustang to be marketed around the world was also the best Mustang ever. The 5.0L V8 makes this the most powerful full production Mustang ever (not including special edition Shelby/SVT packages) along with also being the quickest Mustang lineup ever, with three engines delivering more than 300 horsepower. The new 2.3L EcoBoost 4-cylinder makes the 2015 Mustang the most fuel efficient ever and thanks to the revised chassis and the new independent rear suspension setup, the S550 Mustang should prove itself to be the best handling Mustang ever.

All of those “best ever” features are a big part of why the 2015 Ford Mustang is already selling so well around the United States, but there is one more very important category where the newest pony car is better than any version before it – safety.

2015 Mustang Crash Test Scores
The National Highway Traffic Safety Administration (NHTSA) evaluates all new cars sold in this country as part of their New Car Assessment Program crash tests and having completed said testing on the 2015 Ford Mustang – the news is very good for folks who drive the next gen pony car. The NHTSA uses three key criteria to come up with their crash test safety scores - Frontal Crash, Side Crash and Rollover - and they use these metrics to establish their overall score for the vehicle.

The 2015 Ford Mustang scored a perfect 5 stars in the Frontal Crash, Side Crash and Rollover tests, leading to a 5 star overall rating. This makes the 2015 Mustang the safest ever, outscoring the 2014 Mustang in two of the three categories. The 2014 Mustang scored 4 stars in Frontal Crash and Side Crash, while scoring the same 5 star rating in Rollover tests, leading to a 4 star Overall score for the last generation Mustang.

The 2015 Ford Mustang scored 5 stars for the driver and passenger in the Frontal Crash test, while also scoring 5 stars in both the Side Barrier and Side Pole tests. The only place where the 2015 Ford Mustang didn’t shine was during the Side Crash test, during which event the “rear passenger's thoracic rib deflection was elevated.” However, while this is not factored in to the Side Crash or Overall rating, so it is more of a foot note than a real mark against the new Mustang.

In other words, while the 2015 Ford Mustang is the most powerful, the quickest and the most fuel efficient Mustang lineup of all time, it is also safer than any Mustang sold in the past.