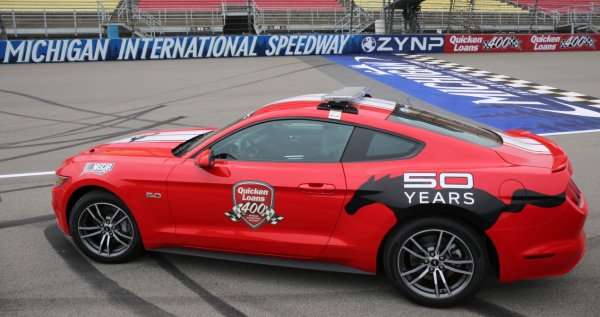 The 2015 Ford Mustang will take the common first step to being a sports car superstar on June 15th as a new S550 leads the field at NASCAR’s Quicken Loans 400 at Michigan International Speedway – helping to both build anticipation for the new model will also serving as another part of the Mustang’s 50th birthday celebration.
Advertisement

Over the past 50 years or so, pretty much every American performance car (or truck) has served as a pace vehicle for a major motorsports event so it was only a matter of time before the new 2015 Ford Mustang strapped on the caution lights and dawned the familiar pace car livery. While the Chevrolet SS performance sedan got to lead the Daytona 500 field this year and the Chevrolet Camaro Z/28 lead the field at the Indianapolis 500, the 2015 Ford Mustang will make its pace car debut at the Quicken Loans 400 at Michigan International Speedway – practically in the Mustang’s back yard.

Ford Motor Company President of The Americas Joe Hinrichs will be at the wheel for the historic first lap.

“Ford is very proud to have the 2015 Mustang GT pace the Quicken Loans 400 this Sunday,” Chantel Lenard, director, U.S. Marketing, Ford Motor Company. “With its proximity to the Motor City, Michigan International Speedway is a showcase for the auto industry. To have Mustang – a brand born of racing – in this special anniversary year, leading some of the world’s best drivers to the green flag, is special. We know our fans will enjoy seeing it out on the track.”

In addition to showing off the 2015 Ford Mustang GT in stunning Race Red in front of one of the largest groups of American performance car fans in the world, Ford Motor Company is using this opportunity to celebrate the 50th anniversary of the mighty Mustang. The 2015 Mustang GT Pace Car will sport the Quicken Loans 400 logo on the doors, the NASCAR logo on the front fenders and a massive 50 Years of Mustang decal sprawling across the entire rear quarter panel.

We can almost certainly expect to see more pace car appearances for the 2015 Ford Mustang in the coming year including some likely gigs at higher profile races, but those Mustang fans who aim to create a pace car replica of the very first motorsports involvement are getting their first look at what they hope will be their future car.