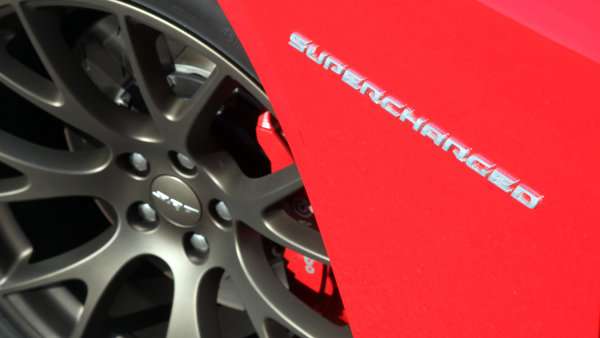 While the Chrysler Group has announced a long list of information on the 2015 Dodge Challenger SRT Hellcat, the company has continued to only offer “at least 600” as the power numbers and I think that this is due to an exciting game of chicken with Ford Motor Company and their new Shelby/SVT Mustang.
Advertisement

The most important thing that we all wanted to know about the 2015 Dodge Challenger SRT is whether it would come with the rumored supercharged Hemi codenamed the Hellcat and if it did – how much power would that blown Hemi offer? Chrysler confirmed that the 2015 SRT Challenger would indeed pack the Hellcat Hemi in a special trimline of its own and while they didn’t offer official power figures, the company promised that it would make at least 600 horsepower and at least 575lb-ft of torque.

The confirmation that the 2015 Challenger SRT Hellcat would pack no less than 600 horsepower created a tremendous amount of excitement in the Mopar camp, but as time as gone on a great many gearheads want to know the official power ratings. Among many of these discussions, Mopar fans and haters alike have questioned why the company is waiting to announce the official power figures and I have a guess as to why Chrysler is keeping the official horsepower and torque numbers in their pocket for now.

First off, keeping something as important as power figures for a high performance car helps to draw more enthusiasm through discussions like this one. Leaving people wondering keeps them asking questions and those questions help to keep the discussion going across the various internet forums and social networks. This article is a fine example as I am talking about the possible horsepower numbers and you are reading it…so there is no question that keeping important figures a mystery helps to stretch out the excitement over a new model.

It Is All About the Horsepower War
The more interesting reason for Chrysler to hold out on us all with the full power figures for the 2015 Dodge Challenger SRT Hellcat pertains to the possibility of this new Mopar muscle car being the most powerful car in the segment. Being the most powerful car in the segment also relies on the Ford Mustang and Chevrolet Camaro not offering more power so I believe that part of the delay comes as a sort of corporate game of chicken between Chrysler and Ford.

The current 2014 Ford Shelby GT500 Mustang is the most powerful muscle car along with being the most powerful American production car of all time. With 662 horsepower and 631lb-ft of torque, no American production road car has ever had more power – not the Corvette, not the Viper. However, the current generation of the Mustang comes to an end with the 2014 model year and it is speculated that Ford Motor Company will not try to design a competitor for the GT500 with the 2015 Mustang. Rumors suggest that Ford will introduce a 2015 or 2016 Shelby GT350 Mustang that will offer more power than the 2015 Mustang GT, but less power than the 2014 GT500 since it is tough for a road-going Mustang to beat 662 horsepower and 631lb-ft of torque.

How The Game Works
Say that Ford is also considering the 600-ish horsepower range for the new Shelby GT350 with the power coming from a forced induction version of the 5.0L that powers the Mustang GT. For instance, the Ford Racing supercharger package increases the output of the Mustang GT up to 624hp so Ford very well may use that setup for the 2016 GT350. If that proves to be the case, a 625 horsepower Challenger SRT Hellcat would claim the title of being the most powerful muscle car on the market. However, say that Ford tweaks that supercharger setup a bit for the new GT350 and eases the power up to 630 horsepower, Chrysler would fall short with 625hp.

There is a good chance that the Chrysler Group has tested the Hellcat Hemi extensively enough to have a safe range of horsepower that will still yield certain fuel economy figures and engine emission levels. That range likely starts around the 600hp mark and it is anyone’s guess as to where it stops on the high end. Say that Ford announces that the 2016 GT350 has 600 horsepower – Chrysler can keep some power up their sleeves and announced that the Hellcat officially makes 615hp. Say that Ford announces the GT350 with 625hp, Chrysler can squeeze 630hp out of the Challenger.

Ford is Playing the Game As Well
Along those same lines, Ford might not be offering any details on the 2016 Shelby GT350 Mustang because they are waiting to see how much power the Hellcat Hemi will officially have. Say that Chrysler had announced right away that the 6.2L supercharged Hemi would make 610 horsepower and 590lb-ft of torque, Ford would know exactly what they have to squeeze out of the 5.0L to allow it to pack more power than the Hellcat Hemi.

In other words, the Ford and Chrysler are playing a game of high performance chicken with the 2015 Challenger SRT Hellcat and the 2016 Shelby GT350 Mustang – carefully watching to see who flinches first and announces official power numbers for their newest super muscle car. The odds are good that we will learn the Hellcat power before the GT350 since the Hellcat is nearing production but I would bet that Chrysler will wait as long as they possibly can before announcing the official output for their new supercharged Hemi.

Auto Motive wrote on June 20, 2014 - 10:56am Permalink
I for one am interested in buying my very last sports/muscle car in 2016. My list are Camaro ZL1 if equipped with the LT4 from the Z06, Mustang GT500 rumored to still retain the 5.8 from 2014 but with an 8 speed automatic like GM has announced for the upcoming Z06 and the Challenger hellcat or Cuda if produced for 2016 with a lighter body and somewhat restro 70 styling. Price point $75k fully optioned. The z06 was on my list but at a rumored $100k its out.