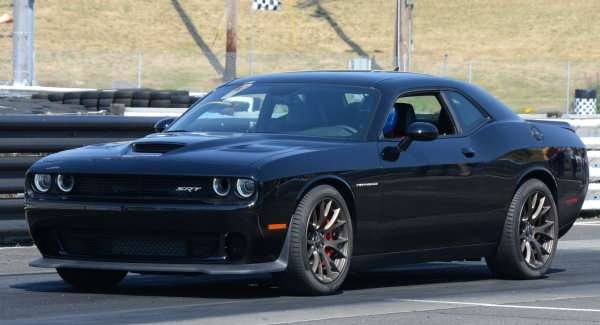 Today I bring you a great on-car look at the 2015 Dodge Challenger SRT Hellcat in action on a quarter mile drag strip and on a 2 mile road course at the recent media launch – with yours truly piloting the 707 horsepower monster muscle car in all of these new videos.
Advertisement

As part of the media launch for the 2015 Dodge Challenger lineup, we had a chance to take a handful of new Challenger models around the road course and down the quarter mile drag strip at Portland International Raceway. We had a chance to spend time behind the wheel of literally every new Dodge Challenger, but my attention was focused on the big power monster that has become known simply as “The Hellcat”.

I should point out that drive impressions for the entire 2015 Dodge Challenger lineup are currently under embargo so I cannot talk about my thoughts on driving the newest Mopar muscle cars, but we are permitted to show off the videos captured during my time testing the new Challenger. Because of that, you won’t find any of my thoughts on the new Challenger, but you will find plenty of video that you haven’t seen before from any other source.

2015 Dodge Challenger on the Road Course
The first two videos that I present to you today show a pair of 2015 Dodge Challengers which I was piloting around the road course at Portland International Raceway. In my first session, I was behind the wheel of a 2015 Challenger SRT 392 in bright red with a manual transmission while in my second session (and second video below), I was behind the wheel of a black SRT Hellcat model with the 6-speed manual transmission.

In each of these videos, I ran 4 laps in the 2015 Challenger – one warm up lap, two high speed laps and one cool down lap – with four other new Challengers on the track. In both segments, I started first and ended first so you won’t see me passing anyone…and you won’t see anyone passing me. You will, however, see how quickly the big, brawny Challenger cuts through the turns of Portland International while the high performance Hemi engines bring about some very big speed on the straightaways – with the Hellcat hitting 140+ on the straight stretches.

2015 Dodge Challenger SRT Hellcat on the Quarter Mile
In my second two videos, we have the 2015 Dodge Challenger SRT Hellcat on the quarter mile. This is an unprepped road racing surface, so drag racing conditions were less than ideal, but I was still able to squeeze out a best run of 11.8 at 118 miles per hour per the on-board timing system. On the other filmed run, I was too aggressive on the launch and I was only able to turn in a 12.5 at 116. The best part of these videos is the sound, as you get a great chance to hear the Hellcat roar and the tires screaming for mercy as I attempt to put all 707 horsepower to the ground as quickly as possible. As a quick reminder, the red cars below are not the same as the red car above. The car above has the 485hp 392 Hemi while the red cars below are both packing the 707hp 6.2L supercharged Hemi.

Finally, a few clips of the same 2015 Challenger SRT Hellcat models launching on the quarter mile from track side, giving a great chance to see the beast in action after experiencing the launch from an on-car view. Crank up your speakers and enjoy!