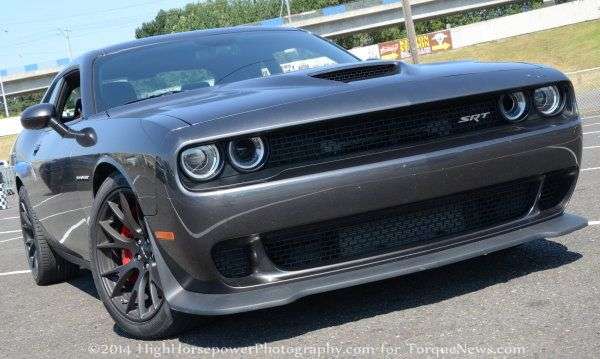 We reported a few weeks back that the Chrysler Group had opened the order bank for the 2015 Dodge Challenger – with the exception of the 707hp SRT Hellcat models – but some new information suggests that the Hellcat Challenger will hit the order banks on August 6th and today we take a closer look at option pricing for the most powerful American production car ever.
Advertisement

The Chrysler Group has done a great job of trickling out information on the 2015 Dodge Challenger SRT Hellcat over the past few months and at this point, there isn’t much that the automaker hasn’t revealed on the 707 horsepower blown beast. The biggest questions at this point focus on the on-sale date and arrival date of the top of the line 2015 Challenger and thanks to the Frederick Scat Pack team – we have an idea as to when customers and dealerships can official order their super muscle car. Also, thanks to Mr. Bob Frederick, we have a list at the option pricing for those who plan to load up their Hellcat Challenger.

August 6th- Hellcat Hits the Order Bank
The Chrysler Group has been pretty quiet as to when the 2015 Dodge Challenger SRT Hellcat will officially go on sale (see the 2015 Dodge Challenger allocation rules), but Challenger expert Bob Frederick posted on his Frederick Scat Pack Facebook page that the Hellcat will become an option in the dealership order banks beginning on August 6th. Granted, there are dealerships around the country which have been accepting orders – and big cash deposits – for at least the past few weeks. However, with the arrival of the Hellcat option in the order banks, August 6th could be the first day in which dealers can actually place an order with Chrysler…which will lead to the Brampton Assembly Plant in Canada building the car when production formally begins.

Prior to the Hellcat arriving in the order banks, paying a dealership a deposit doesn’t actually get your Hellcat powered Dodge Challenger any closer to production – it just helps to guarantee that you will get first shot when that dealership can place an order with the automaker.

Again, the order bank information for the 2015 Dodge Challenger SRT Hellcat isnt official, but considering the source, I am inclined to believe that there is at least a good chance that the Hellcat will arrive in the order banks in 10 days.

A Closer Look at 2015 Challenger Hellcat Pricing
We learned at the media launch of the entire 2015 Dodge Challenger lineup that the SRT Hellcat package would carry a base price of $59,995 plus destination of $995. That would lead to a base MSRP of $60,990, but the official Dodge ordering information states that the out the door base price - with gas guzzler tax and destination – starts at $61,053 with the 6-speed manual transmission. Opting for the new heavy duty TorqueFlite 8-speed automatic transmission increases that base MSRP to $62,636.

These prices represent a slight increase from the first pricing figures for the 2015 Dodge Challenger SRT Hellcat – but it is hard to argue with an extra $63 for the most powerful American production car ever. In the long run, even with this slight hike in prices the Hellcat is by far the most affordable member of the 700 horsepower club.

In terms of options, there aren’t all that many for the Dodge Challenger SRT Hellcat because the car comes so heavily loaded in standard form. Unlike the Ford Shelby GT500 Mustang, which requires you to pay up for the SVT Performance Package to get all of the go-fast goodies, the Challenger Hellcat comes with everything that helps make this car so fast including the monster brakes and the adjustable suspension system.

The features that can be added on to the 707hp Challenger SRT Hellcat include a black satin hood for $995, Pirelli summer performance tires for $395, a power sunroof for $1,195, a Sepia and Black Laguna Leather package for $1,795, navigation for $695, an engine block heater for $95 and red seat belts (not available with the Laguna leather) for $95. Finally, for an extra $500, buyers can pick from Phantom Black Tri Coat Pearl, Ivory White Tri Coat Pearl and Redline Tri Coat Pearl.

A thanks to the Frederick Scat Pack team for the new order bank and pricing information on the mighty Hellcat Challenger!