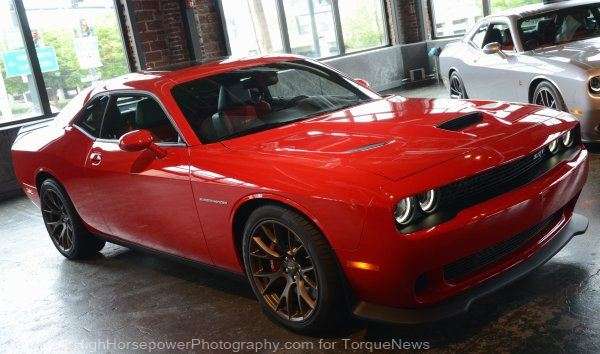 The order banks have opened for the 2015 Dodge Challenger SRT Hellcat and this leads many to question how Chrysler will decide which dealerships get Hellcat models during the early rush – and today we examine the allocation rules that will likely help keep dealerships from adding a huge markup while helping buyers save money.
Advertisement

The trickiest part of rolling out a car like the 2015 Dodge Challenger SRT Hellcat is coming up with a fair way to decide how to allocate the first units to the many dealerships around the country. All of the 2,300+ Dodge dealerships in the country would like to have the 707hp Mopar muscle car serving as eye candy on their showroom floor with a monster price tag that features an even more monstrous dealership markup. This huge dealership markup has become very common and this has a couple negative effects – including slowing sales of these high end models while also making them affordable only to the people who aren’t likely to take the cars out and drive them. After all, if you pay $100,000 for a car with an MSRP of $63,000, you are far less likely to spend much time with it at the drag strip or road course.

Chrysler wants people to be out on the road and on the track, pushing the 707hp Hellcat Challenger to its limits, but a massive dealership markup and a failed allocation process will prevent the company from selling as many units as they would like while also keeping the cars in the hands of collectors rather than drivers.

To fix this process, the Chrysler Group is introducing a unique three phase allocation process that should help keep the dealership markups on the 2015 Dodge Challenger SRT Hellcat lower than expected, meaning that buyers won’t have to shell out the huge money that some were claiming would prevent the Hellcat Challenger from flourishing.

“If you want to market-adjust the car, that’s your right. But if your days-on-lot goes above what the other guys that are selling them at MSRP is, they will end up earning the allocation because their days-on-lot will be lower. They’re turning the inventory,” said Kuniskis. “Some dealers are going to have heartburn with that. I want this car out in the marketplace so that somebody is sharing it with 50 of their friends and elevating the brand. That’s what I want; not sitting in your showroom with a rope around it. I want people driving these cars, talking about them, revving the engine and having everybody go ‘I want one of those.’ That’s why you build a halo car.”

The Three Phase Allocation Process Explained
When the first group of 2015 Dodge Challenger SRT Hellcat muscle cars roll off of the assembly line and clear the quality control process, the Chrysler Group will begin shipping them out to those dealerships who want them. To decide who gets the first Hellcat Challengers and who gets the most Hellcat Challengers, the company will look at Dodge sales from the last 180 days. Not just Challenger or performance car sales – all Dodge vehicle sales over the past six months. The dealerships that have done the best job of selling Dodge brand cars, minivans and SUVs recently will get the first and most Challenger Hellcat models. This process will be used to deliver cars from the point when the Hellcat cars begin shipping until December, when phase two begins.

ALSO SEE: Here is How to Build Your Hellcat Challenger Today

Phase two looks at the Dodge brand sales figures from the nation’s dealer network for September, October and November and, like phase one, the second part of the allocation process will send Hellcat Challengers to dealerships based on their Dodge brand sales numbers.

Finally, once dealerships around the country have gotten their hands on the 2015 Dodge Challenger SRT Hellcat, the Chrysler Group will begin watching the “days on lot” figures to decide where to send the units built next year. This means that if a dealership gets a Hellcat Challenger over the next few months and it doesn’t sell it for whatever reason while another dealership on the other side of town has received 2 and sold them both, that second dealership will get first shot at the Hellcat models coming off of the assembly line in Canada. With this approach, dealerships in areas with no demand for a 707hp muscle car won’t have multiple units sitting on the lot while consumers in other areas wait for their Challenger to be built.

The Allocation Process Saves Hellcat Buyers Money
The allocation process for the 2015 Dodge Challenger SRT Hellcat will help prevent dealerships from sitting on inventory while prospective buyers wait, but it will also prevent dealerships from applying massive markups. While there will most certainly be some dealerships that tack on $10,000-20,000 to those folks willing to pay big money for one of the first Hellcat Challengers, that crowd is quickly diminished and once those deep pocketed buyers are gone – dealers are left with cars on their showroom floor with an excessively high priced Challenger and no one to pay the price. With some allocation processes, dealers could get their hands on the Hellcat models and jack the price up of every unit in their inventory. Other dealers that don’t have problems getting cars would do the same thing and that means that most of the Hellcat Challengers would have a big markup. However, with the sales success of the Hellcat Challenger itself being factored into the allocation process after the first few months, dealerships will not be able to apply huge markups and have cars sitting on the lots while they wait for a buyer…because other dealerships that are selling the 707hp beast for a lower price will be moving units and getting the right to future models.

In theory, if a large Dodge dealership that did big business over the past six months was to get a couple Hellcat Challengers early on only to price them at $80,000, they will be unable to sell them when people like Bob Frederick are selling cars at MSRP as quickly as he can get them. Dodge doesn’t care about dealership markup…they only care about sales…so anything that they can do to help move units more quickly will help the company while preventing the dealerships from adding huge markups and gouging the buyers.

In the long run, this allocation process isn’t likely to be popular with those dealerships that planned to tack on $20k to the MSRP of the 2015 Dodge Challenger SRT Hellcat and while we are likely to still see some markups – the Chrysler Group’s approach to allocating Hellcat models should keep those markups lower and it should prevent them from existing beyond the first three months of sales.

MUST SEE: Watch the Dodge Challenger SRT Hellcat Hit 202mph on the Dyno

It will be interesting to see if this approach works, but on paper, this looks like the kind of move that will help keep markups low and help the Chrysler Group move as many 2015 Dodge Challenger SRT Hellcat models as possible.