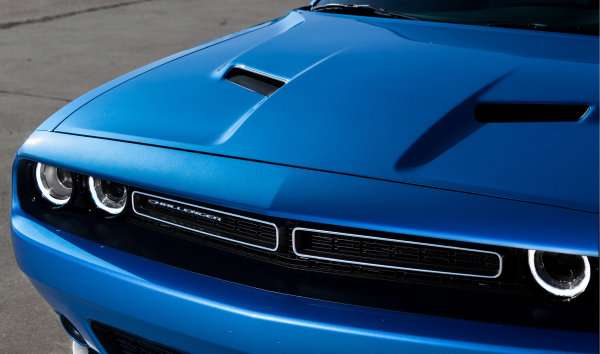 The information for the 2015 Ford Mustang, 2015 Dodge Challenger and 2015 Chevrolet Camaro is pretty much all available and while the world is focused on the higher performance models, I thought that this would be a good time to compare the most affordable versions of the three American muscle cars – in their entry level, V6 forms.
Advertisement

As you probably know, the 2015 Ford Mustang is all new and the 2015 Dodge Challenger is undated inside and out, while the 2015 Chevrolet Camaro is very similar to the 2014 models…making its design the oldest of the group. There will be a new Camaro for 2016, but in the meantime the current Camaro has beaten both of the cross town rivals in sales for the past four years and in most of the months during those 4 years.

With the Mustang and Challenger being new, this is the best time for Ford and Dodge to knock the Camaro off of its pedestal and a big part of this raging sales battle is the base V6 models. All three of these muscle cars are best known for big power, but the entry level V6 models are actually the better selling models for all three of these American performance cars.

With that in mind, today I bring you a quick tale of the tape between the 2015 model year versions of the Dodge Challenger, the Ford Mustang and the Chevrolet Camaro.

As you can see, the 2015 Ford Mustang is the least expensive muscle car to get into both among manual and automatic models. The Challenger is the most expensive, but that price does include the segment exclusive 8-speed automatic transmission and a cabin that will seat four people far more comfortably than the Mustang or Camaro. More importantly, the 2015 Chevrolet Camaro 1LS packs significantly more horsepower than the 2015 Ford Mustang V6 and the 2015 Dodge Challenger SXT while trailing the Mustang in torque by only 2lb-ft of torque. Realistically, the people who are buying base model V6 muscle cars likely aren’t all that concerned with performance so the Mustang’s slight torque advantage is most likely lost behind the fact that the Camaro offers so much more horsepower.

ALSO SEE: How To Build Your SRT Hellcat Today

Feature and Color Comparison
Both the 2015 Ford Mustang and 2015 Dodge Challenger have an advantage in the level of interior and exterior technology over the Chevrolet Camaro, but that should be expected considering that the Mustang and Challenger are both new while the Camaro is entering its 6th model year. Most notably, the Challenger and Mustang both come with standard high tech lighting systems in the front and rear, along with a basic standard infotainment system inside that is superior to what is found in the 1LS Camaro.
The 2015 Challenger SXT comes with standard 18 inch wheels, as does the Camaro 1LS, while the 2015 Mustang V6 wears standard 17 inch wheels. In terms of exterior colors, the 2015 Ford Mustang has the edge, with ten options to the 2015 Chevrolet Camaro coupe’s eight colors and the 2015 Dodge Challenger’s six. Inside, 2015 Camaro and 2015 Challenger owners can pick from an all-black or a black/grey layout while the base model 2015 Mustang follows the black-only approach joked about by Henry Ford decades ago – the 2015 Mustang V6 interior comes in any color you want, so long as you only want black. However, I still give the Mustang the color edge with so many options.

Exterior Options for the Base Model
While someone looking to buy the least expensive 2015 muscle car might not want to add a bunch of optional features that drive up the price, there are just as many prospective buyers who want to be able to dress up their new Mustang, Camaro or Challenger from the factory.

Exterior options for the 2015 Ford Mustang are fairly limited, include an enhanced security package, a reverse sensing system and 18 inch wheels.

MUST SEE: Here are the Bargain Prices of the 2015 Dodge Challenger SRT Hellcat

The 2015 Chevrolet Camaro 1LS includes more optional exterior goodies than the Mustang, including a larger rear spoiler, a front splitter, a bunch of stripe packages, an elaborate body kit and a silver fuel door. The 2015 Dodge Challenger SXT doesn’t have the most options, but it comes with what I consider to be the most significant options. This includes two different 20 inch wheel packages, high performance tires, unique Challenger stripes and a power sunroof that you cannot get in the base model Mustang or Camaro. Also, the 2015 Challenger has a collection of popular equipment packages that just aren’t offered with the base model Mustang or Camaro. This includes a Cold Weather Group package that adds heated seats and a heated steering wheel, a 6-speed premium sound system, a driver convenience package, the Super Sport package, and – most importantly – the Challenger SXT has the Super Track Pak. The driver convenience package adds gadgets like cross path detection, bind spot monitoring, parking assist and a remote start system and more.

MORE: Everything About Dodge Challenger

Interior Options
The interior options of all three 2015 model year muscle cars are very limited. 2015 Mustang V6 buyers can only add all weather floor mats. 2015 Camaro 1LS buyers can add floor mats, pedal covers or unique footwell lighting. 2015 Challenger buyers can add the most exciting interior option in the group with the 8.4L infotainment system…something that you cannot order in the base model Mustang or Camaro.

The Big Decision
As you can see above, the 2015 Ford Mustang V6 Coupe is the best bargain in the segment, whether you want an automatic or manual transmission so if price is your most important aspect of buying – the Mustang is the car for you. If you are most concerned with having the most power in your base model muscle car, the 2015 Chevrolet Camaro has an obvious edge and if you want the highest level of factory personalization (although it comes with the highest price), the 2015 Dodge Challenger is the entry level V6 muscle car for you.

Murph wrote on September 10, 2014 - 1:37pm Permalink
And if the 2014 models are any indication of 0-60 times, and you want the cheapest car with the best performance, the mustang is the muscle car for you. Even with the least horsepower, it has the fastest 0-60.
Tim wrote on September 10, 2014 - 3:52pm Permalink
I like them all. I prefer V8's (Own a 14 SRT) but wouldn't mind having a V6 Stang as a grocery getter. Anyway, if you want the coolest, best looking...get the Challenger.
Murph wrote on September 10, 2014 - 5:38pm Permalink
True, while my favorite is the stang, I still have to admit that the Challenger looks the best out of the big three modern muscle cars. I just can't get past the fact that it's the most expensive while also being the slowest for each trim level, that is, unless you go all the way up to the hellcat.
Tim wrote on September 10, 2014 - 7:25pm Permalink
That is debatable. Most of the major car magazines give the 392 SRT the edge in 0-60 and 1/4 mile times, but they are close (drivers race). The 392 SRT was much more expensive than at 5.0 GT (while the 5.0 was faster than the RT). Dodge is now offering 392 RT's that are comparable to a fully loaded 5.0 GT in price (still slightly more expensive).
Bob-O wrote on September 11, 2014 - 2:59am Permalink
Article is paper comparing "entry level" models. Why are you commenting on fully loaded SRT & 5.0? weird.
Murph wrote on September 11, 2014 - 9:23am Permalink
Comparing one car's base price to that of a fully-loaded car with a ton of available options just doesn't make sense. Dollar to dollar, the Mustang has the best 0-60 of any of the modern muscles. That's what makes it best car for me, because that's really the only thing I care about. The Challenger's reason for being, in my view, is to be a whole lot more comfortable and a whole lot more stylish while still giving muscle car performance. As far as the 2014 SRT goes, even dodge itself rates it the "high fours", making it slightly slower than the 5.0 which clocks in at 4.4 to 4.5 seconds, depending on who you ask. Even if they were the same, 32k vs 40k speaks for itself. And this is even without the aftermarket. The mustang has the largest and most competitive aftermarket of any of these cars, which means high-power mods for good prices. Dollar for dollar, the stang can offer the best 0-60. It might not turn, and it's not too comfortable, and everyone and their mother has one. But for this, it holds the crown.
Jb wrote on September 10, 2014 - 9:27pm Permalink
If you want 4 adult passengers to ride comfortably in your car, the Challenger is for you. The price is higher because you're getting more car. An aftermarket supercharger is available to give this V6 400+to the wheels. Well worth it! TWSC
TimSlim wrote on September 11, 2014 - 3:01am Permalink
Supercharging (over 6,000 dollars) is asinine. Why would you do such a foolish thing?
Brian wrote on November 22, 2014 - 10:46pm Permalink
Because at the base price of 30k for the SXT Plus and the cost of 6k which is on the high end for a supercharger, you could have a 400 he challenger with all the interior options. At 36k you would get a base level rt with the hemi and spend 50 percent more in insurance and more in gas.
Jb wrote on November 24, 2014 - 1:11pm Permalink
It's $4500 BTW.
Aaron wrote on February 11, 2015 - 2:43pm Permalink
Whey would you put a supercharger on a v6 afe you stupid
Rick wrote on November 22, 2014 - 8:39am Permalink
The Base Model Cars all have Air Conditioning, Power Windows, Power Locks,Tilt, Cruise, what more would You want ? I can't understand wasting money on the higher end models all three of these Cars can get You alot of tickets.
Armand Rpss wrote on December 26, 2014 - 6:08pm Permalink
I am 76 years old, don't look it, don't feel it and neither do the forty-five year old women I chase in my Goddam, sedate Hyundai sedan. I am still the same Motörhead I've always been except that 0-60 seems less important as long as it is at least 6 seconds. I've enjoyed all of my Mustangs especially my '70 with the 351 Cleveland. 2015 Camaro is a cartoon. I'm rushing to buy a v-6, base Challenger with a sun roof. Look out girls at LA fitness, here I come! And by the way, you don't have to get old -- think young and drive the Dodge!!!