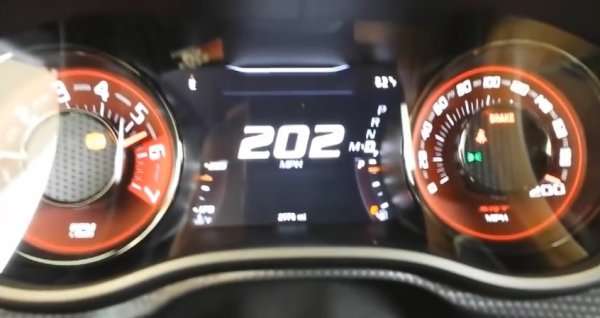 The performance world was surprised to hear that the 2015 Dodge Challenger SRT Hellcat would fall short of a 200 mile per hour top speed, but a video of the 707hp Mopar muscle car on the K&N dyno shows the beast hitting 202 miles per hour – leading many to question the seemingly official top speed of 199 miles per hour.
Advertisement

When we first learned that the 2015 Dodge Challenger SRT Hellcat would pack an astonishing 707 horsepower and 650lb-ft of torque, one of the biggest points of speculation pertained to whether or not the most powerful American production car ever would be able to crack the 200mpg barrier. It has an analog speedometer that tops out at 200 which suggests that the Hellcat Challenger would join the Viper in the 200+ club…but it turned out not to be the case.

The Challenger SRT Hellcat has an official top speed of 199 miles per hour. This is mighty impressive, but reaching 200mph would put in an even more elite group of performance vehicle. Fortunately, a video featuring the Hellcat Challenger on the dyno at the K&N testing facility shows the digital speedometer hitting 202 miles per hour in 8th gear.

202 on the Dyno =|= 202 on the Road
When this video showing the 2015 Dodge Challenger SRT Hellcat hitting 202 miles per hour on the dyno, a great many under-informed individuals proclaimed that the 707hp muscle car has an actual top speed of 202 miles per hour. Sadly, that likely isn’t the case as 202mph on the dyno doesn’t indicate that the car will hit 202 on the open road – or anywhere other than a dynamometer.

Keep in mind when watching the dyno video of the new Dodge Challenger SRT Hellcat hit 202 on the dyno, the car isn’t going 202 miles per hour – the wheels are turning at 202 miles per hour. The engine power is just being used to turn the rollers of the dyno and the weight of the vehicle has almost no impact on the speeds reached. Essentially, the bare Challenger chassis with the Hellcat Hemi, but with no body and no interior would hit the same top speed of 202 miles per hour. On the other hand, when you are using that 707 horsepower to test the top speed on the road, that engine is having to move all 4,500lbs of the Challenger.

Also, when someone makes a full top speed run in the 2015 Dodge Challenger SRT Hellcat in the real world – hopefully at a venue like the Bonneville Salt Flats – the car will be facing a tremendous amount of air resistance that is not present during a dyno run. The Challenger is a big car with a big front end and all of that front end space equates to lots of drag at higher speeds. That wind resistance is likely the biggest factor preventing the stock Hellcat Challenger from breaking the 200mph barrier in the real world.

Based on this video, we could certainly see tuned Hellcat Challengers on the dyno hitting ever higher top speeds…but this video doesn’t mean that the 707hp Challenger will definitely hit 202 in the real world.

The Hellcat Charger Will Top 200
Thanks to advantages in aerodynamics, the 2015 Dodge Charger SRT Hellcat will be able to crack the 200 mile per hour barrier in the real world, with an official top speed from Dodge of 204 miles per hour. Dodge claims that the higher top speed is due to the more aerodynamic body – even though the Charger is heavier than the Challenger. I would imagine that with some minor modifications, the Challenger will be able to outrun the Charger in the long run…but even on the dyno, it looks like the Charger is the faster of the two Mopar muscle cars.

Oh, the 2015 Dodge Challenger SRT Hellcat sounds absolutely incredible while making its dyno run so before watching the video below of the stationary 202mph run – make sure that your speakers are cranked up good and loud.

ken wrote on August 29, 2014 - 8:23pm Permalink
curios why when it abruptly stopped at 202 did the rpms continue to rise
Brian wrote on August 30, 2014 - 12:28pm Permalink
I agree Ken. Appears to me that the digital speedo is limited to 202 MPH. It is obvious from listening to the engine and watching the tachometer that she was still accelerating when the speedo abruptly stopped at 202.
Patrick Rall wrote on September 2, 2014 - 10:01am Permalink
My understanding is that the digital speedometer stops at 202. Evidently, the car hit closer to 225 or something like that...but ive not seen any video or anything to confirm that.
JC wrote on September 5, 2014 - 1:48pm Permalink
Yes.. Speedo is limited but engine is not. MT went on to explain that the car actually kept accelerating to about 222mph. It just does not reflect on the speedo.