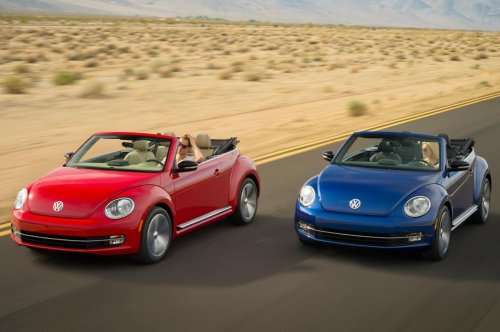 The 2013 VW Beetle Convertible debuts online ahead of LA

While Volkswagen plans to introduce their redesigned droptop bug at the 2012 Los Angeles Auto Show later this year, the company has offered up a first look at the 2013 VW Beetle Convertible via a collection of pictures that seem to give us a great look at the new convertible without giving us a clear look at the new top – presumably saving that for the big debut in November.
Advertisement

After the topless VW E-Bugster made its auto show rounds earlier this year, many speculated that the 2013 Volkswagen Beetle Convertible would feature a similar retractable hard top but that is not the case, as the company has stuck with the traditional soft cloth top. The biggest difference is how the top is stowed, as the larger form of the new Beetle allows for enough room for the top to flatten down against the area immediately behind the rear seats. This provides for quite a different silhouette compared to the previous generation Beetle convertible as the folding top of prior models (dating back to the Bug’s of the 1960s) hung out over the rear end of the car – almost creating a spoiler look.

One interesting aspect of the first images of the 2013 Volkswagen Beetle Convertible is that we really don’t get a very good look at the new top in the up or down position. The pictures offer a few angles that show the top folded down but they never show the profile of the car without something obstructing a clear view of the stowed soft top. The company has also not included any images of the 2013 Beetle convertible with the top up – although the accompanying press release discusses how the new soft top is long and low, allowing the convertible to look very much like the hardtop models. This also differs from older generation VW Beetle droptops as many of them had the soft top that bowed between each of the reinforcing beams in the roofline.

Unfortunately, the lack of a picture of the 2013 Volkswagen Beetle Convertible with the top up leaves us guessing based on what the press release says but having seen a couple of these driving around the Michigan area with the top both up and down; I have found that the new convertible top makes the car look more like a hardtop model with a cloth roof dressing. However, the car still looks a whole lot cooler with the top folded away…especially now that the convertible top isn’t left hanging out over the back end.

Other than the convertible top features, the 2013 Volkswagen Beetle Convertible is very much the same as the coupe models in terms of both interior features and exterior design. One key difference comes in the way of a new safety system that helps protect occupants in the event of a convertible rollover. The new Automatic Rollover Support System has two bars mounted just behind the rear seats that are controlled by the same system that controls the airbags. In the event of a rollover accident, these bars spring up to help protect the passengers from being crushed as the topless car rolls.

As expected, the 2013 Volkswagen Beetle Convertible will come with three engine options – the 2.5L 5-cylinder engine that makes 170 horsepower and 177 pound-feet of torque, the 2.0L TDI clean diesel 4-cylinder that makes 140 hp and 236 lb-ft or the 2.0L turbocharged TSI 4-cylinder engine which offers 200 hp and 207 lb-ft. The 2.5L entry engine is only available with a six speed automatic transmission while the TDI and TSI engines can be had with either a 6-speed manual transmission of a 6-speed DSG dual clutch automatic transmission.

Check out the gallery on the right by clicking any of the thumbnails for a closer look at the 2013 Volkswagen Beetle Convertible. With the LA Auto Show just over a month away, we should soon have a much better look at the new droptop Bug from every angle.

Ceecee wrote on October 17, 2012 - 7:44pm Permalink
It is interesting that they havent shown the new top really. In most of teh pics with it down there is more focus on the models and the front which hasnt change much. Guess we will have to wait for the la vw premier next month