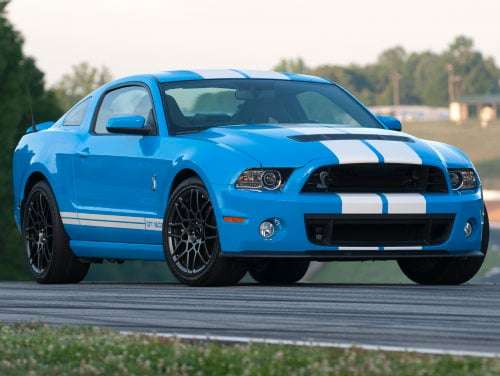 A few weeks ago, General Motors made big news when they offered video of the 2012 Chevrolet Camaro ZL1 running a stock high 11 second quarter mile but the battle of high end muscle cars has just heated up as the 2013 Ford Shelby GT500 has turned out a stock quarter mile time of 11.6.
Advertisement

While General Motors did the testing on their own that resulted in the 2012 Camaro ZL1 running in the 11.90s, the stunning 11.6 quarter mile time for the 2013 Ford Shelby GT500 actually comes via the folks at Motor Trend. They were able to get a 0-60 time of just 3.5 seconds en route to turning out an elapsed time of 11.6 with an incredible track speed of 125.7 miles per hour. For comparison, Motor Trend ran a 12.1 at 117.4 miles per hour so based on their results, the new super ‘Stang is a full half second faster in the quarter mile while also offering 8 more miles per hour. Click here for a look at the Camaro ZL1 running in the 11s, with video.

Aside from the fact that the folks at Motor Trend were able to turn in a quarter mile time a half second better in the 2013 Ford Shelby GT500 than in the 2012 Chevrolet Camaro ZL1, it should be noted how the two cars were tested. The quarter mile time of 11.6 by Motor Trend was during tested where there were certain time limitations where the Camaro ZL1 11 second track times were accomplished by GM, who would have had as much time and practice as they could have wanted in working to get the best time possible. Based on that, it would make sense that if someone with drag racing experience was handed a 2013 GT500 and a good amount of time to learn the car – we could see stock quarter mile times into the lower 11 second range.

General Motors claimed the top of the muscle car class when they unveiled the 2012 Chevrolet Camaro ZL1 with 580 horsepower and 556lb-ft of torque but with an official rating of 662 horsepower and 631lb-ft of torque, the 2013 Ford Shelby GT500 Mustang stepped up and reclaimed the title for being the most powerful muscle car on the market. Next, GM went ahead and showed off their Camaro ZL1 running a stock quarter mile time in the high 11 second range and then the 2013 GT500 comes out with quarter mile times in the 11.60 range. Right now, the Camaro ZL1 still holds the bragging rights of being the best handling muscle car with an impressive Nürburgring time of 7:41.27 – a time that bests some well known supercars from Porsche, Lamborghini and Audi. Ford doesn’t have an answer for that 7 minute ‘Ring time but there have been plenty of images and videos of the 2013 GT500 lapping the famed German road course and back in February, a TorqueNews reader caught a GT500 test vehicle in a trailer sporting some well-worn tires and Nürburgring decals back in February (click here for more on that interesting spyshot). Based on this, we fully expect to hear some Nürburgring results for the new super ‘Stang soon.

The one key advantage that the 2012 Chevrolet Camaro ZL1 has over the 2013 Ford Shelby GT500 is the magnetic ride control system that has allowed the high end Camaro such incredible handling capacities. The new GT500 does offer an electronic adjustable Bilstein suspension package as part of the $3500 SVT Performance Package which could be enough for the new Shelby Mustang to be able to take the ZL1 on a road course – with the help of those 662 horses, of course.

As we head into summer, we can certainly expect to see more results from performance tests with the 2013 Ford Shelby GT500 and the Chevrolet Camaro ZL1 as these two super muscle cars go head to head in a horsepower battle that hasn’t been seen since the late 1960s and early 1970s.