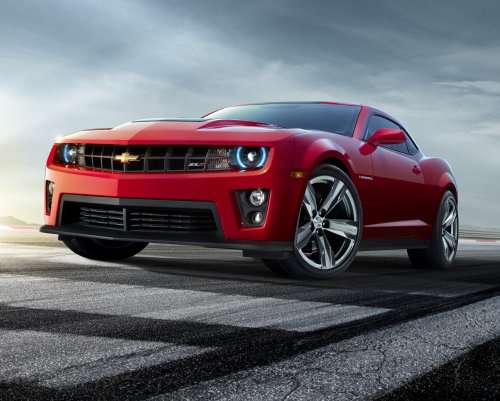 The world of drag racing is packed full of speculation as to what cars can run what numbers but when General Motors recently took a pair of 2012 Chevrolet Camaro ZL1 super muscle cars to Milan Dragway in Michigan, their cameras were rolling to capture both the automatic and manual versions of the ZL1 turning in 11 second quarter mile times in bone stock form.
Advertisement

The 2012 Chevrolet Camaro ZL1 when fitted with the same 580hp engine and Goodyear Eagle tires but with the 6-speed manual rather than the automatic turned in a time just slightly slower than the automatic, with an elapsed quarter mile time of 11.9652 and a trap speed of 117 miles per hour. The manually shifted 2012 ZL1 carries a starting price of $54,995 including a $900 destination charge.

The 2012 Chevrolet Camaro ZL1, when fitted with the 580 horsepower supercharged LSA V8, the 6-speed automatic transmission with TapShift controls and the standard Goodyear Eagle F1 Supercar G:2 tires turned in a best time at Milan Dragway of 11.9368 with a trap speed of 116 miles per hour. The optional 6-speed automatic transmission for the Camaro ZL1 carries a price of price of $1,185, bringing the base price to $56,180.

Both of the 2012 Chevrolet Camaro ZL1 Coupes tested by GM at Milan were fitted with the advanced performance traction management system featuring launch control to help optimize the launch. In addition to making these high 11 second quarter mile passes with showroom stock cars on factory stock tires; General Motors tested the Camaro ZL1 Coupe with high grip drag radials to test the function of these super sticky tires with the traction control system. GM didn’t state any time figures for the Camaro ZL1 when fitted up with the gripper skins but having made over a thousand runs down the dragstrip in my day – I would expect that a good set of drag radials will make a huge difference over the stock Goodyear tires.

For comparison, the 2011 Ford Shelby GT500 Mustang with the old 5.4L supercharged V8 packing 550hp and 510lb-ft f torque turned in a quarter mile time in the range of 12.4 seconds with a trap speed of 115.8mph (according to Motor Trend); so the new Camaro ZL1 is quite a bit quicker than the outgoing GT500 Mustang. However, the 2013 GT500 packs 662 horsepower and 631lb-ft of torque – a setup that many expect will afford the GT500 to run the quarter mile well into the mid 11 second range.

Unfortunately, while the video below offers plenty of shots of the ZL1 in action and parked around the track – there is no actual video of the cars turning in these high 11 second times. Because of this, we can expect that those racers faithful to the competition will question the runs unless GM offers up more videos showing these 11 second runs in their entirety. I expect to see these 11 second times backed up by privateer racers as GM continues delivering the new super muscle car to new owners around the country and those lucky folks get to the track.

Those who are experienced in the art of the quarter mile may notice that in the dragstrip video of the 2012 Chevrolet Camaro ZL1 Coupe, the drivers do not appear to be launching off of the line very hard. We didn’t get to see the 11 second runs from start to finish so the launches shown may be on slower runs but if those gentle-looking launches allowed the Camaro ZL1 Coupe to break into the 11 second range – a driver coming out of the whole harder might be able to shave a tenth or two off of that stock time…especially when working with drag radial tires.

In any case, General Motors has set the bar pretty high with both the automatic and manual transmission 2012 Chevrolet Camaro ZL1 Coupe reportedly turning in 100% factory stock quarter mile times in the 11 second range. With the 2013 Ford Shelby GT500 Mustang ready to hit the streets – it will be interesting to see just how long it takes Ford to turn in better times with their new 662 horsepower Mustang. It should go without saying that when the first quarter mile times for the new Shelby Mustang hit the internet – TorqueNews will be quick to bring you that news. Stay tuned.

Anonymous wrote on May 28, 2012 - 4:13pm Permalink
gm engineers say the corvette and camaro traction control kills hp and tq to control wheelspin and to not over tq the irs thats why theres very little difference in 0to60 in the zo6 ,zr1 and zl1the difference is in tire size.