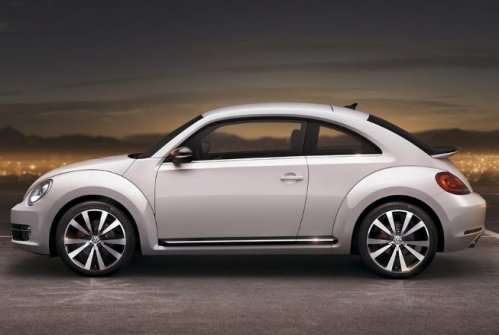 The 2012 Volkswagen Beetle will make its formal debut at the Shanghai Auto Show and the US debut at the New York Auto Show but today, Volkswagen Auto Group rolled out a spread of images, video and information on the newest VW “bug”.
Advertisement

As you can see in the image to the left and the video below, the 2012 Volkswagen Beetle has grown a bit, looking longer and wider than the outgoing model that hadn’t changed much since its reintroduction to the market in 1997.

The overall rounded shape from the original “New Beetle” has been removed in favor of a slightly more angular shape. The hood and roofline have been flattened and elongated in both of those areas, with a sharpened angle where the windshield meets the roof. These changes have given the 2012 Beetle a sportier, less cuddly look without straying from the look that has made the Beetle (or Bug, if you will) so popular over the past few decades.

Across the front end of the 2012 Volkswagen Beetle, the round headlights remain but LEDs have been added to give the car a more modern look and below those new headlights is a fascia area that looks similar to the previous generation while offering a refreshed feel. Across the back end, however, things have changed quite a bit with a set of new taillights stretching from the quarter panels to the hatch opening, offering a completely different layout from the rear lights on the outgoing models.

VW claims that the 2012 Beetle’s exterior design was based more on the original VW Bug and while the 1997-2010 Beetle clearly offered some cues from the original, the old school Beetle wasn’t as rounded as the New Beetle. The 2012 Beetle offers rounding all over the car – from the wheel flares to the overall form of the car – but it also integrates angles similar to those seen on the original. The hope of VW is to add some masculinity to the 2012 Beetle in an effort to depart from the “girl’s car” reputation of the previous generation Beetle.

Drivetrain information has been limited, but we can expect a 200 horsepower turbocharged motor to power the “21st Century Beetle” in addition to a turbo diesel (TDI) option in the near future. Also, in addition to the hardtop model shown above in the picture and below in the video, there should be a droptop version sporting the new lines coming shortly after the initial product launch.

The 2012 Volkswagen Beetle is expected in the fall of 2011 with the price to be announced closer to the official launch.

VeteranFromPenn... wrote on April 18, 2011 - 12:47pm Permalink
This looks like a cute little Malibu Barbie car that might appeal to some women. The car will only sell at all if it sells for under 20K with an automatic transmission and reasonably equipped including a GPS. If it is to be made in Mexico, then VW will need to improve quality control there (based on the 2011 Jetta I just bought with poor fit and finish and the need to use High Test gas and F1 grade motor oil).
Anonymous wrote on April 18, 2011 - 12:59pm Permalink
I agree. The 2012 Volkswagen Beetle looks really nice. What is the gas mileage on this car? How many miles per gallon does it consume?
Marcus wrote on April 18, 2011 - 1:43pm Permalink
I really like the 2012 VW Beetle. It is sporty and seems very fuel efficent. It is amazing how this VW Beetle shows Volkswagen's path from from the hippie favorite of the 1960s to the sleeker models of the current time.