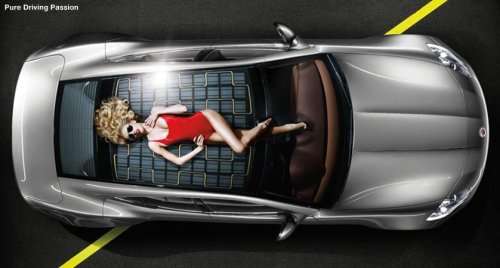 The 2012 Fisker Karma is like no other car in the world, combining the efficiency of an electric vehicle with the high performance output of a modern sports car wrapped in a high end luxury package and today, the official fuel economy ratings from the EPA are official with the Karma sedan receiving a rating of 52 MPGe along with offering 32 miles of electric only range.
Advertisement

The official EPA fuel economy ratings for the 2012 Fisker Karma are 52 MPGe (combined, using the electric drivetrain and the gasoline assist engine) while being able to travel 32 miles per gallon strictly on electric power and when the battery is completely depleted, the full sized sport sedan can achieve 20mpg running only on the gasoline engine. Those numbers might not seem that impressive compared to other electric vehicles available in the US market like the Nissan Leaf and Chevrolet Volt but neither of those cars offer 403 horsepower nor can they dash from 0-60 in just 6.2 seconds – while the Fisker Karma sedan does at all.

The 2012 Fisker Karma has two drive modes – Stealth and Sport – to combine zero emission driving with high performance like no other car on the American market.

In Stealth mode, the Fisker Karma sedan drives strictly on electric power with the lithium ion battery system providing a whopping 981lb-ft while also reaching a distance of 32 miles without using any gasoline according to the EPA. However, Fisker believes that real world drivers (especially in the right conditions) will get closer to 50 miles before they have to rely on the gasoline range-extending engine. In my experiences with modern electric vehicles, when driven more gently I was able to easily outlast the EPA electric driving mileage rating so I would have to agree that the 32 mile electric range could be more of a lower end average.

When the battery of the 2012 Fisker Karma is depleted – or when the driver is more interested in pulse pounding high performance driving than saving the Earth – the sleek sedan offers the Sport mode. When Sport mode is selected, the Karma’s 260 horsepower 4-cylinder gasoline engine engages and when working in conjunction with a 175kW generator system; the Karma’s electric drivetrain churns out 403 horsepower. This is enough to help the luxurious sedan hit a top speed of 125 miles per hour after ripping from 0-60 in 6.2 seconds. This puts the Fisker Karma on par with some of the premier sport sedans of the day in terms of performance while also offering an electric mpg equivalent of 52 miles per gallon.

To the “green” world, the 2012 Fisker Karma’s EPA ratings may not be all that impressive compared to the top selling electric vehicles of the day but comparing the Karma to, say, the Chevrolet Volt is like comparing apples to oranges…or maybe apples to watermelons. The Karma’s drivetrain works in much the same fashion as the Chevy Volt, with the electric motor(s) turning the wheels while the gasoline engine works just to continually charge the batteries that drive those electric motors. However, while the Volt focuses strictly on supreme fuel economy, Fisker offers the ability to drive one of the quickest luxury sedans on the market and when you don’t need to go 125mph or move from 0-60 in 6.2 seconds – the Karma will also let you drive 32-50 miles without using a drop of gasoline.

Lots of other cars offer similar levels of luxury and performance in a full sized sedan while fewer cars offer the freedom of all-electric driving but no car on the American market offers everything that you get with the 2012 Fisker Karma. It might not get the same fuel economy ratings as the Nissan Leaf or the Chevrolet Volt but the Karma stands alone as the only high end luxury sedan to combine high performance with emission free driving.