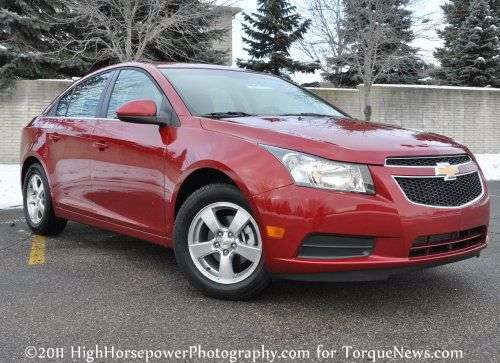 The Chevrolet Cruze has quickly become one of General Motors’ bestselling models but when the 2012 Cruze models start hitting showrooms, they will offer more standard features and improved fuel economy over the current (2011) models.
Advertisement

The 2012 Chevrolet Cruze models that are powered by the 1.4L turbocharged engine mated to a 6-speed automatic transmission will benefit from a revised gear ratio setup, which allows for a 5% in highway fuel economy. This means that for the 2012 Chevy Cruze 1LT, 2LT, and LTZ there will be roughly a 2 miles per gallon gain across the lineup. This increase allows these Cruze models to reach 38 mpg and with their 15.6 gallon fuel tank – these models are capable of going almost 600 miles on a single tank of gas.

The only trimline in the 2012 Chevy Cruze lineup that does not get an improvement in fuel economy is the entry-level Cruze LS which is powered by the 1.8L 4-cylinder and a 6-speed manual transmission; but those models still yield 36mpg on the highway and 26 around town.

Finally, in addition to the improvement in fuel economy, the 2012 Chevy Cruze 1LT and Eco models will receive some new standard goodies, including Bluetooth phone connectivity, a USB port, steering wheel-mounted audio controls, cruise control, a leather-wrapped steering wheel and a leather-wrapped shift knob. These features were offered for the 2011 Cruze 1LT and Eco models but they were a part of the $525 Connectivity Plus Cruise package. After seeing that this package was ordered by 90% of 2011 Cruze buyers, GM has opted to make those popular features standard for 2012.

Click here for a review of the 2011 Chevrolet Cruze 1LT.