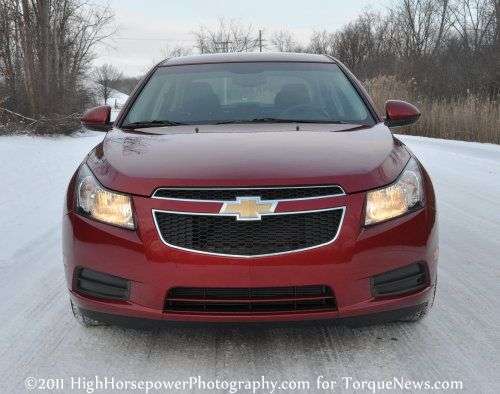 A review of the 2011 Chevrolet Cruze

The 2011 Chevrolet Cruze effectively replaces the Chevy Cobalt and the Cavalier before it, so the new C-segment sedan has big sales shoes to fill and a fairly bad reputation to battle.
Advertisement

The Chevrolet Cavalier was a huge seller, with a handful of generations comprising the models 23 year run and when the Cobalt was introduced as a replacement in 2005, it saw similar sales success. The problem was that those two models were among GM’s least expensive cars and regardless of their sales success, they gained a reputation for being “cheap cars”. While there was the occasional performance trimline, they were fairly uninspiring to drive in their base form and the interiors could be viewed as being anti-luxury. Don’t get me wrong…this was true of much of the segment but in the modern age of the C-segment sedans, it is all about how nice you can make a car while still keeping the price low. Basically, the 2011 Chevy Cruze needed to offer a more enjoyable drive, a smoother ride, and a nicer interior without pricing itself out of the market.

The Interior
When my 2011 Chevy Cruze test car arrived, I was immediately impressed with the look of the interior. My test car was a Cruze 1LT, one step above the base model and with the prior models, this meant lots of plastic, plain cloth seats and a cassette player. The seats are cloth, but they have dark red center inserts to break up the monotony of the black upholstery. The Cruze 1LT seats offer a variety of manual adjustments although with a handful of adjusting levers, getting your seat to a comfortable point may take some time. Honestly, the adjusting feature of the seats was probably my biggest complaint about the interior, which really speaks volumes of the new Cruze. Most importantly the seats are comfortable on a long drive while providing some support under stints of spirited driving. The dark red cloth from the seats is echoed along the door panels and dash rather than the orange-peel finish black plastic found on previous models and this design vastly improves the other look and feel of the interior. In addition to the cloth inserts on the inner door panels, the armrests are padded and there is a fair amount of storage space in each of the lower door pockets. One memory that I have of one of the Chevy Cobalt was that when I would open and close the driver’s window, the door panel was so flimsy that the panel would flex and change shape as the window moved. The interior of the Cruze, along with being much nicer, is much sturdier than the outgoing Cobalt and it is really a huge step up for Chevrolet in their lower-priced models.

The center stack of the 2011 Chevy Cruze flows up from the shifter area, leaving plenty of legroom while comprising all of the controls into a very tight, clean area. The radio is very basic but it incorporates CD, AM/FM, and satellite radio a very compact area with a small screen offering all of your HVAC and stereo information. The stereo system is fully controllable from the steering wheel controls and a very easy to setup Bluetooth system, both part of the $525 Connectivity Plus Cruise package.

The Exterior
Exterior styling is always a matter of opinion but I think that the aggressive look of the 2011 Chevrolet Cruze is a huge step in the right direction. The Cobalt and Cavalier that came before the new Cruze have offered performance models with sportier looking exteriors but for the most part, their standard base models were incredibly bland – the same is not true of the Cruze. The front fascia was designed with optimum aerodynamics in mind to help improve fuel economy and these efforts have resulted in a great looking front end with its own distinct styling. The headlights spread back into the fenders, giving the car a menacing look and while the fog lights available on the 2LT are a nice addition, the lower fascia filler adds to the overall sporty look of the Cruze. As you can see in the gallery below, my 2011 Cruze was fitted with optional 16” alloy wheels (a no-brainer at just $395) and the Crystal Red Metallic Tintcoat exterior paint (which tacks on an additional $325) but otherwise this is the look of the standard 2011 Cruze. I am impressed that General Motors had the brass to offer an aggressive looking, low priced C-segment sedan as my test car had a sticker price of just $20,240.

The Drive
While there was the occasional performance model like the Cobalt SS, the previous C-segment Chevy sedans were economy cars and nothing else. This meant uninspiring performance for the sake of improved fuel economy but thanks to the new turbocharged 1.4L Ecotec 4-cylinder, I would go so far as to call the 2011 Cruze fun to drive. My test car was equipped with a 6-speed automatic featuring a manual shift mode, although I would have loved to have this peppy little engine mated to a manual transmission (available only in the base model). Even with the automatic transmission, the turbocharged 4-cylinder in the 2011 Cruze felt great and the seat-of-the-pants dyno would have predicted more than 138 horsepower. While more power could always be better, the turbocharged 1.4L engine offers solid low end torque and for someone who recognizes it, the short spool time of the turbocharger is hardly noticeable. For the average driver, they probably won’t notice any difference on launch compared to a naturally aspirated 4-cylinder but once the turbo spools up, the Cruze pulls surprisingly hard with the automatic transmission providing quick shifts; keeping the engine well within the powerband. Most people don’t buy a entry-level C-segment sedan for its acceleration or top speed but the 2011 Cruze scoots out pretty nicely and has no problems keeping up with fast-moving highway traffic – it also did great in the snow. I just wish that I could have the interior goodies and the manual transmission.

What most people do buy a C-segment sedan for is fuel economy and Chevy has impressive claims with 24 miles per gallon around town and 36 mpg on the highway. These numbers come together for a combined fuel economy of 28mpg but these are under “normal” conditions. I wanted to see what kind of fuel economy the 2011 Cruze would get when it was driven a little more like a sports car, while fully testing the performance capabilities. Through that tank of gas with absolutely no efforts made to drive with fuel economy in mind and a 70/30 mix of around town/highway driving, my Cruze test car got right around 27mpg.

Low prices, high mileage and "better interiors" have been the advantages of Japanese automakers over the past decade but with the 2011 Chevrolet Cruze, GM has put together a low-priced C-segment sedan that offers a change from the typically bland styling of the segment with a dressed up, comfortable interior. Add to that the impressive fuel economy and surprising power of the new turbocharged 1.4L Ecotec I4 and you have a low-priced American sedan that will go head to head with any comparable Japanese sedan…and win. Chevrolet’s advertising campaign for the new Cruze targets the Toyota Corolla and GM has really done a fantastic job of putting together an affordable alternative to Japanese models like the Corolla and Honda Civic.

Click below for a look at my gallery of images of the 2011 Chevy Cruze 1LT.

Andrea wrote on July 29, 2011 - 7:06am Permalink
Chevrolet has made a decent car, I have given it a chance and found to be best quality then the competition. I am having Chevrolet Cruze and I am impressed with its splendid performance. I think people should give it a chance. <a href="http://newcars.indiandrives.com/carmodeldetails.php?make=Chevrolet&model=Chevrolet_Cruze">Chevrolet Cruze India</a>
Ron wrote on July 31, 2011 - 7:59am Permalink
I have a Chevy Cruze with 7000 miles on it. They said I would get around 28 cith mpg & 36mpg hwy. I get about 18mpg city & 20mpg hwy.

Tesla Giga Berlin's New Hurdle: It's Not Only the Gov't, but Now Tesla Itself
Teslas Are Sold Out Until 2023, But The Timing May Reverse
END_OF_DOCUMENT_TOKEN_TO_BE_REPLACED