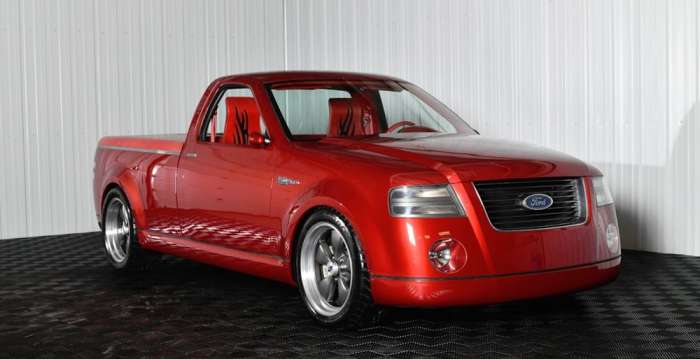 Most cool concept vehicles remain in the possession of the automaker that built them, but the 2001 Ford F-150 Lightning Rod Concept will be sold to the highest bidder at the Barrett Jackson Scottsdale auction next January – giving collectors an extreme rare chance to own a one-off concept vehicle.
Advertisement

The last Ford F-150 SVT Lightning was offered from 1999 through 2004 as part of the tenth generation of the F-Series pickup. With 380 horsepower and 450 lb-ft, the supercharged half-ton was one of the strongest and quickest trucks of the day, but when the eleventh generation trucks were introduced for 2004, the Lightning package raced off into the sunset – seemingly forever. However, by 2001, the Lightning was incredibly popular, leading Ford to roll out the Lightning Rod Concept.

This truck was built for the auto show circuit and while it was based on the body of the 2001 F-150, the front end was revised to preview the design of the upcoming eleventh generation. Next January, this customized Ford- F-150 will roll across the Barrett Jackson auction block in Scottsdale, Arizona, giving a collector a rare chance to own an automaker’s concept, but there is a downside.

It cannot legally be driven on public roads.

Lightning Rod Concept
The 2001 Ford F150 Lightning Rod Concept shares the name of the SVT pickup, but it doesn’t share the powerplant. Under the hood of this uniquely-styled half-ton is a 5.4-liter, non-supercharged V8, with the unspecified power output being sent to the rear wheels by means of a 4-speed automatic transmission. Even without the supercharged SVT engine, this truck is probably pretty quick, but the goal wasn’t to create a fast truck – it was to create a truck that would draw lots of attention at auto shows.

To do that, Ford modified the body of the F-150 from front to rear. This includes a smoother, wider front end that is very similar to the look of the eleventh generation trucks, a rounded rear end with integrated taillights and a smoothed body, devoid of exposed door handles or drip rails. Next, the windshield was re-angled and the roof was chopped to bolster the hot rod look. Of course, it also rides on some old school looking 20-inch wheels with dual exhaust tips being tucked into the rear roll pan.

Finally, on the inside, this truck features unique lightweight bucket seats and plenty of silver trim from side to side.

Shows and Tracks Only
The only problem with the incredible 2001 Ford F150 Lightning Rod Concept is that, like many concept vehicles, this truck has not been subjected to the many tests required for road use in the United States. This truck hasn’t been included in crash testing or emission testing, so it cannot be registered for road use.

It would still make a great show vehicle, perhaps being towed on an open trailer behind a production 2001 F-150 Lightning, and the owner could drive it on closed circuits, but this beautiful truck will make an incredible addition to any collection. Back in 2012, it sold at an RM Soethby’s auction for $46,200, so it seems likely that this rare concept vehicle will sell in the range of $50,000.