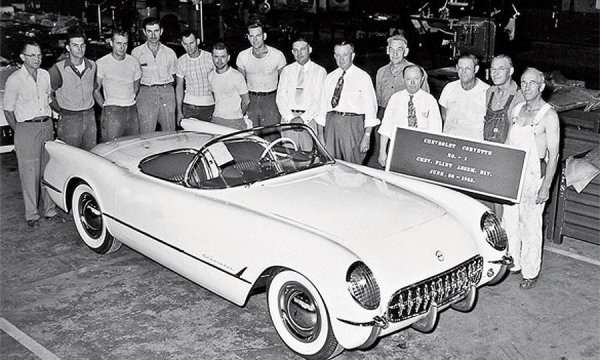 The 1st Ever Chevrolet Corvette was Built 63 Years Ago Today

On June 30th, 1953, the first ever Chevrolet Corvette rolled off of the assembly line at General Motors’ Flint, Michigan facility and after 63 years of production, the Corvette has become one of the best known sports cars in the world.
Advertisement

1953 was the first model year for the fabled Chevrolet Corvette and on June 30th of 1953, the first batch of the original Vette crept down the Flint Assembly Line. I say “crept” because the production process for the first year of the Corvette was slow and careful, with the cars essentially being built by hand as the plant worked out the kinks in producing a fiberglass bodied sports car.

With today being June 30th, 2016, the first ever production Corvettes turn 63 years old and while the Corvette has grown to be one of the best performing cars in the world as well as being one of the bestselling sports cars in America, things weren’t always so great for the Corvette.

Slow Early Corvette Sales
When the 1953 Chevrolet Corvette was introduced, it electrified the American public, as they finally had a sports car that would rival the best from across the pond…or so they thought. Like the European and Germany sports cars, the 1953 Corvette was a curvy little 2-seater with a groundbreaking fiberglass body. However, unlike the European sports cars, the first Corvette lacked some fun-to-drive factor, with the 235 horsepower Blue Flame inline-6 engine sending just 150 horsepower to the rear wheels via a standard automatic transmission. In addition to every 1953 Corvette coming with the 150hp I6 and the automatic transmission, every car that first year was a white convertible with a black canvas top and a red interior.

In addition to lacking the performance of the European competitors, the 1953 Corvette was plagued with quality issues due to the bugs being worked out of the fiberglass body production. The cars were known to leak in the rain, doors could pop open while the car was in motion and the general finish of the fiberglass body was lacking on many of the early Corvettes. Due to the slow production process, there were only 300 Corvettes built and sold for the 1953 model year, but as the production issues were worked out and quality improved sales would increase substantially for 1954. Fortunately, the first Corvette was a gorgeous machine, so people bought them even without big power.

Zora Brings the V8
Of course, the biggest change for the first generation Chevrolet Corvette came in 1955, when GM finally listened to engineer Zora Arkus-Duntov and added the first V8 engine option to their spry little sports car. A manual transmission was also introduced for 1955 and while the I6 would be sold in very low numbers through 1955 – the 1956 model year made the Corvette a V8-only affair. With the introduction of the V8 engine, the Corvette packed the power needed to battle the European rivals and sales bloomed over the following years of the C1 Corvette.

Under the watchful eye of Zora Arkus-Duntov, the performance capabilities of the Chevrolet Corvette would over the next decade, eventually becoming the leader in American high performance and leading to the supercar that so many of us know and love today.

So, from everyone here at TorqueNews, Happy 63rd Birthday to the Chevrolet Corvette!