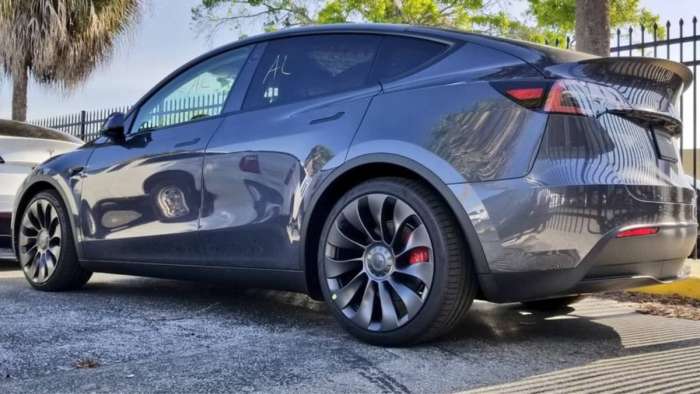 What is going on with Tesla Model Y deliveries? I have read on Twitter and Reddit in the past two days that people say they got a call to switch their black Model Y to red, white, blue, or gray for immediate delivery. What could this possibly mean?
Advertisement

I just got a call specifically asking if I wanted to change colors for an earlier delivery (one to two weeks), rather than a month.
So it looks like the Black Model Y vehicles are coming last. I declined the color change and they'll keep my config. They said it will take about a month for these to start delivering, if not sooner.

Does this mean the black Tesla Model Y cars are coming last? Here is one opinion from another Reddit user, which makes a lot of sense.

He writes “Tesla is possibly batching colors and black was last in line. Now that they are down to low staff levels, combined with some people passing on their deliveries (normal cold feet + corona fear + drop in markets) has left them in a situation with some inventory of colors already run and zero of the next color intended to run this week or next. This is why they said the black could be about a month. Figure 2 weeks of shout down, then 1-2 to ramp up with black. On the other hand, why sit on some of the colors you already have. Go down the line and ask people who are close enough for easy delivery if they’d like one. If yes, great. If not, no harm and keep going. But it keeps some cash flowing vs just losing time.”

I read two more comments, who said they got exactly the same call. One of them wrote this. “I just got off the phone with a Tesla rep (Nick) in Fremont who told me the same thing and I also declined to change colors. I have the same order as you do. Like you, I've always had black cars and I'm not switching now. I'll wait the 1 - 2 months to get the color I want.”

It could be that Tesla Model Y is feeding demand in Canada first. Yet, could this be something else? Here is another good opinion, let me know what you think.

Reddit user M3fanOz, writs he doesn’t think this is related to the Tesla shutdown and color batches, but the typical end of the quarter push. He says “No it is a sign of a typical end of quarter push where they want to move any inventory they have, as an isolated event, it is not unusual this time of the quarter. With the factory closing, they probably don't have time for another batch of Black Model Ys. Automotive is one of the sectors hit hard by an economic downturn, so Tesla may adjust production Q2 if inventory starts to grow beyond reasonable limits. But they could also open up other markets for Model Y in Q2/Q3, even though initially that wasn't the plan. Getting the base 35K Model 3 on the menu in the US is another good move they may be able to make. Tesla isn't immune to a demand drop off in an economic downturn, and some Model Y buyers have probably canceled their orders. But they started Q1 with low inventory and zero Model Ys a large inventory build-up in 2-3 weeks is unlikely.”

What do you think of this opinion? Here is the problem with this opinion I just presented. Why would they ask someone to modify the color of their car to take delivery if they could just give it to someone who had that spec?

Perhaps it’s just a move to improve the cash flow. It could simply be a batch order thing and trying to re-arrange orders in the queue to suit cashflow and virus restrictions. But this would mean that the specific configurations in questions have nearly no open orders though. Any other color than black performance Y would sound like a pretty popular configuration.

Here is another good view. It could also be that shipping and delivering the cars out of CA is problematic and they want to move them locally? Or they are trying to hit the end of quarter numbers? Could the shipping out of California be a big issue these days?

No Timeline on Black Model Y

By the way, if you have seen the images and videos of the Tesla factory lot or the Model Y deliveries, no black cars were there at all. I guess Tesla underestimated the demand for black Model Y and now the current circumstances have caused demand for other cars to go down.

I would say check out the gray Tesla Model Y. It looks really good.